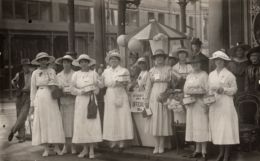 We’re raising funds here at Counter-Currents. That’s why they call it a fundraiser, or so I’ve been told. — Some daft podcaster

As regular listeners of The Writers’ Bloc will know, I jokingly refer to our fundraising efforts here on Counter-Currents as “crass financial concerns.” The reality of the podcast/livestream format is that while it can be used to educate, edify, and, crucially, to compare and contrast ideas, its primary product will always be entertainment. This is not a bad thing; people need to be entertained, and it is better that they’re entertained by friends who will not poison their minds. It’s also important that we include as much education, awareness-raising, networking, and academic achievement in our shows as possible.

My vision of The Writers’ Bloc is of a show where we reconstitute salon culture. Civilized man seeks out good and intelligent company so that through learned discourse he may rise above the savage and draw closer to God. I deliberately structure the shows less formally than Counter-Currents Radio, as I’m aware that the Bloc’s undercard nature gives us a creative freedom not enjoyed by some of the bigger fish. Also, I’m a naturally lazy person, so I look for ways to get the job done with minimum effort; this usually means finding interesting people to interact with, and then relying on my charm to try and bring out the best in them. Since not all writers are talkers, this is more easily said than done. So far, there haven’t been too many duds.

When I say “crass financial concerns,” it is for easy laughs: It is both a Seinfeld reference (the episode with the pigman) and an irreverent dismissal of a vital part of the show’s efforts, combined with a sudden voice change to a gravely croak, made even worse by my low-quality microphone, and followed ironically by a 4-5 minute long list of ways to donate and live consumption of Alaska Chaga tea, our dauntless sponsor’s flagship product.  It’s supposed to be an ironic appropriation of the grifter archetype and a simultaneous mockery of it. Specifically, it is an example of verbal irony, where I wear the superficial traits of the grifter like a set of clothes even though I am raising money for a good cause.

Since I assume that the audience understands this, they too can participate in the postmodern theater which is the livestream, mostly through the chat and the Entropy superchats, but also through our shared culture as early twenty-first century netizens. The stuffed shirts in literature and Classics departments yearn for the times of Greek theater, but something quite like it and yet entirely new is played out weekly at 10 PM CET on the Counter-Currents DLive and Odysee channels.

But at the core of why the financial concerns are crass is the inherent guilt and shame that we feel when asking for money. I know that it stings me pretty badly. When our illustrious editor Greg Johnson asked me to put The Writers’ Bloc under the auspices of Counter-Currents, part of me was doubtful if I’d be useful from a fundraising perspective. I considered myself too proud to ask for money, especially from relative strangers over the Internet. It seemed so . . . well, crass at the time.

It shouldn’t feel crass. All jokes aside, the money raised by Counter-Currents doesn’t end up in my liquor cabinet. Instead, it goes towards such glamorous projects as The Jonathan Bowden Archive, Counter-Currents events and gatherings, as well as the increasing number of people in the small but sturdy “back office,” those nigh-magical men and women who’ve learned the secret elven crafts of “Xeroxing,” “web development,” and “scheduling.”

I keep telling everyone who’ll listen that we are facing the most momentous and grand task in the history of the white race, and that our cause demands nothing but the complete rebirth of the spirit of white men and a reassertion of white mastery over our ancestral homelands. My basic selling point to young men is that to fight for our cause is the adventure of a lifetime and that nothing the modern world offers could compare to what one gains by taking on this fight, the meaning given to one’s life and actions, and the recentering of the world on the Axis Mundi of white identitarian nationalism, which we interface with the common man through the nationalism of his specific white nation. And yet, I do consider it crass, even if jokingly, even if just a little, to ask for money in order to pursue this grand and noble cause. Why?

We live in a degenerate age, by which I don’t just meant that people are degenerates (although they are), but rather that our society is subject to degenerative effects — the effects of ageing and decay. One of the things that has suffered is public trust. It used to be that when someone asked for money for a noble cause, you could reasonably trust that they’d put it towards that cause. However, admitting racial aliens, especially those who thrive on swindles involving our public trust, has made us cagey about men asking for money, and even cagier about men asking for money in order to pursue some Grand Cause. So often has the Grand Cause been used as a moral shield for an insincere grift that now the very hint of a Grand Cause arouses suspicions, like a tuning fork exciting the salivation response in Pavlov’s dog. We therefore either devote ourselves and our energies to minor causes or we raise funds for Grand Causes by self-effacing and hiding behind the shield of irony, because sincerity, or at least the projected image of sincerity, paradoxically appears insincere in the age of grift.

This would be enough of a problem if we were raising money to help lost puppies and sad kitties, but we’re not in the business of rescuing unfortunate animals here at Counter-Currents. No, we are part of the Right-wing political ecosystem of the West, and as such suffer the added difficulties and indignities of this contentious conceptual space. Aside from the usual mistrust and grift, we are also operating in an environment where trust is even further eroded by enemy infiltration, subversion, and plain old fraud. We are trying to raise money in an environment where fundraising scandals like Ezra Levant’s incessant petitioneering, Alex Jones’ Super Male Vitality™, and Milo Yiannopoulos putting half a million up his nose yearly have occurred.  Different though we may be from these people in all areas which matter, first and foremost ethnicity, their trail of destruction includes a lingering miasma of distrust, especially when it comes to people parting with their precious dollars and cents for the benefit of causes.

In the wake of the Russo-Ukrainian War, I’ve made it my business to study the Russian art of propaganda, which has been described as “postmodern hell.” Its aim, essentially, is not to convince or persuade the consumer of propaganda, but to make him doubt the very possibility of truth, or at least sincerity. Due to the unquestionable influence that Russian foreign intelligence has had on the burgeoning Dissident Right in the West, this ethos of bringing the very idea of truth of sincerity into doubt has also leaked into this idea-space. This is not to let the Western regimes off the hook, as they’ve been very much attacking the idea of correctness and truth for their own part. The very notion of postmodernism is that there is no truth, only power relations.

There are many ways you can help Counter-Currents:

« Witches & the Decline of the West