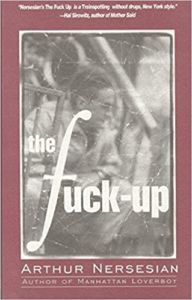 Published in 1997, Arthur Nersesian’s The Fuck-Up might be the spark that ignited the explosion of what came to be known as urban hipster culture in the 2000s and beyond. The biography on his now-defunct website alludes to this, disparagingly, and reinforcing the hipster motif, by basically saying he wrote the story before it was cool:

When The Fuck-Up came out in 1997, MTV Books picked it up and reprinted it in a new edition for hipsters everywhere. Soon Nersesian was no longer known only to a cabal of young bohemians on Avenue A.

That being said, none of this detracts from the novel; it’s simply a great read.

The story follows a now all-too-familiar unnamed protagonist: a young, arrogant, aspiring writer living in New York City. It takes place in the pre-gentrified 1980s, and the grit serves as a sort of faux insta-authenticity for most of the novel’s readers who had the luxury of experiencing the rehabilitated — and safer — New York from the early 2000s to BLM 2.0 (2020). The main character can’t seem to get out of his own way. Whether it’s dropping out of college, getting fired from shitty jobs, or being dumped by a girlfriend he’s primarily dating for shelter, the fuck-up keeps fucking up.

Now itinerant, he winds up on the couch of a stalwart friend, Helmsley Micinski. Though older than the main character, Helmsley is described as one of the youngest ex-college professors ever. Although the novel states that Helmsley’s professorship was lost due to potential psychological instability, the fact that he reads Ulick Varange’s Imperium on the subway and has a first edition German printing of Oswald Spengler’s Decline of the West on his bookshelf alludes to other reasons why he may not have fit in too well in academia. Regardless, the protagonist’s stay on his friend’s sofa is cut short by the protests of Helmsley’s new girlfriend, a disgusting Italian-American woman from a neighborhood that probably had no Italians left in it by the time of the book’s release.

This is where the novel takes some liberties. The again-homeless protagonist now finds shelter with a single-mother, sexy girl-boss in her thirties who doesn’t seem to mind downgrading in the dating pool. When that relationship sours, he secures a new living arrangement as a house-sitter for an eccentric European filmmaker. The only catch is that he has to pretend to be gay in order to stave off concerns that he’ll become intimate with the auteur’s beautiful live-in girlfriend, which he does, culminating in the two getting caught in bed together and having our anti-hero again on the streets looking for a place to stay. Were that many 1980s gorgeous New York City women really lining up to sleep with smelly, rag-attired, deadbeat guys? 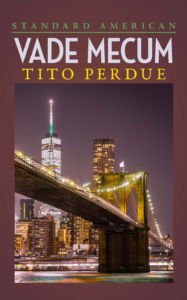 What initially reads as a romanticization of vagabondism eventually leads to genuine homelessness. It’s gritty, miserable, and in the case of the main character and the highly unfortunate sequence of events that happens to him, somewhat believable. There are countless other misfortunes that occur which are too cumbersome to recount in a review, but they all climax in what came to be the glorification of hitting bottom. It doesn’t appear as if Nersesian intentionally did this, but the subsequent cultural norms of boho-chic fashion (people spending a lot of money to look poor), the rapid gentrification of New York slums (this technically is not a bad thing; what’s more hipster than whining about gentrification?), and big-budget Hollywood films stating that “hitting bottom is not a weekend retreat” all put The Fuck-Up and the life lived which inspired it at the forefront of these now-cringey standards.

Without doing an ounce of research to validate this claim, I assume by default that Nersesian — a New York native — bemoaned his rapidly gentrifying city. All of his subsequent novels, of which I have read none, seem to take place in the city, and this is probably for the best, since he’s writing what he knows. The dichotomy of living in a cosmopolitan urban center that bleeds through in the prose is on point. “To be young and alone in New York City meant you either had to have a lot of parental assistance or have a lot of luck,” says the main character when discussing his financial woes.[1] When his life’s unraveling intensifies, he reflects,

I thought about how I had grown to tolerate almost all of New York’s degradations. Reality now seemed authentic only with a certain degree of anxiety and humiliation.[2]

These observations are, in part, why I thought this novel would be a great read for anyone on the Dissident Right, for they hint at something occurring outside the reach of all those who don’t belong: Everyone else just has to live a life of constant “anxiety and humiliation.” This leads to the all-too-common self-described incel or NEET who is frequently encountered in the online Dissident Right: people entirely disaffected from modern society with little hope of attaining what is constantly projected at them to be the key to happiness. Is there hope for someone who’s “unemployed, unconnected, and unmotivated(?)”[3] I’m sure many people reading this, at one point or another, have had the feeling that “as the components of your life are stripped away, after all the ambitions and hopes vaporize, you reach a self-reflective starkness”[4] as we watch our civilization being dismantled with glee around us. Though today’s insanity was already well underway during the novel’s release as well as at the time of its setting, you can tell it was written in an era that had less of a demand for ideological orthodoxy — and this is part of the formula that makes it such a good read.

At one point Helmsley tells our protagonist, “The counter-culture eventually becomes the culture,”[5] and it is later stated that “[t]he only thing that separates mainstream culture from subculture is a budget.”[6] Those of us on the Dissident Right are well aware of the truth of these comments, and should take heed of them when planning for our own futures. As the world continues to accelerate, it is only a matter of time before the milieu birthed in the wake of an original work such as The Fuck-Up goes away. I do not know if our counter-culture will ever be allowed to take its place in the mainstream (a lack of budget surely makes this difficult), but in the meantime, you can enjoy reading The Fuck-Up. It’s worth it.