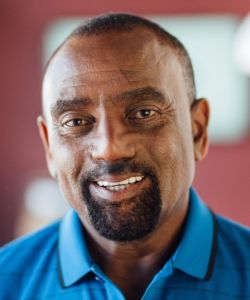 When I heard that a recently released documentary accuses black pastor Jesse Lee “Amazin!” Peterson of sexually preying upon the troubled young men he’s made a career out of rescuing from a life of sin and degradation, my immediate reaction was to laugh uproariously.

Then again, I laugh uproariously at the very mention of Jesse Lee Peterson’s name. He’s simultaneously the dumbest and most hilarious political pundit in world history. One loves him like one loves a pet monkey. He’s stupid in a way that puts one immediately at ease. He’s so slow-witted, I imagine he requires some kind of handler or trainer à la Marlin Perkins from Wild Kingdom or Jack Hanna from Animal Adventures. I picture them changing his adult diapers while he laconically peels a banana with his feet. Peterson has a dull-lidded look of incomprehension on his face that signals he doesn’t understand anything he’s ever been told, no, not even once in his life. There is nothing on Earth more entertaining than hearing him attempting to struggle with even the most basic theological concepts.

Peterson’s fans seem to love him because he’s the opposite of woke­: He’s barely awake. He’s aggressively anti-black, anti-woman, and anti-gay. He’s endorsed putting blacks back on plantations, rescinding women’s right to vote, and preventing Muslims from holding political office. What’s not to love?

So now that the aggressively fag-bashing Christian minister has been sucked into some odd purity-spiraling vortex where he’s being accused of predatory homosexual behavior by a radical Catholic organization whose founder is a self-described sodomite in recovery, this perverse game of Tag the Fag may be all the comedy I can handle for the rest of 2022. If it gets any funnier, I may die of laughter.

Peterson was born a poor black child 73 years ago in Midway, Alabama. His biological parents abandoned him almost immediately, heading north to Indiana to establish separate new families of their own. He was raised by his grandparents and reportedly developed a lifelong bitterness toward his mother and women in general — but, for some reason, not toward his father nor men in general. According to associates, he claimed on more than one occasion to have been molested as a child. He has never been married, although he had a son out of wedlock. Peterson was also born with a cleft palate that wasn’t fixed until his teens, which may explain the professional broadcaster’s inability to pronounce even the simplest words.

In 1990, Peterson founded a non-profit organization called BOND: Brotherhood Organization of a New Destiny, whose stated mission was “Rebuilding the Man.” For decades, he lived in a private home variously referred to as BOND House, aka BOND Home for Boys and BOND Home for Young Men. He would share his living quarters with multiple troubled young men at a time. There’s absolutely nothing suspicious about a lifelong bachelor who cohabitates with numerous down-and-out young men, especially when that bachelor makes a living decrying what an abomination it is when a man lieth with another man as he would with a woman.

The 26-minute documentary Amazing Disgrace released last week by the ebulliently radical Catholic organization Church Militant features five men — some of whom lived with Peterson at BOND House for years — who accuse Peterson of “homosexualism.”

The whole sordid stew gets stickier when one considers that Church Militant founder Michael Voris, who resembles a gay Robert Redford created in a secret lab by L. Ron Hubbard, has built his brand by portraying himself as a redeemed ex-bisexual:

I have never made a secret that my life prior to my reversion was extremely sinful. . . . I will now reveal that for most of my years in my thirties, confused about my own sexuality, I lived a life of live-in relationships with homosexual men. From the outside, I lived the lifestyle and contributed to scandal in addition to the sexual sins. On the inside, I was deeply conflicted about all of it. In a large portion of my twenties, I also had frequent sexual liaisons with both adult men and adult women. . . . I gave in to deep pains from my youth by seeking solace in lust, and in the process, surrendered my masculinity.

Peterson had been a guest on Voris’ Church Militant Live Stream less than three months ago, and the pair quibbled genially over doctrinal issues such as the holy trinity and the Christ’s divinity. It’s unclear what motivated Church Militant to unleash this damning documentary so quickly after playing nice with Peterson, but I’ve long been convinced that one can drive oneself insane trying to figure out why people do the things they do.

The first of the five men to accuse Peterson of what Church Militant calls “homopredation” is Patrick Rooney, who claims to have known JLP for the better part of 30 years. Late last year on his blog, Rooney started writing a series of essays about the horrors of sexual molestation and “sexual sin” that culminated in a blog entry on January 6, 2022 titled “The DEVIL Has My Old Friend, JESSE LEE PETERSON.” In the essay, Rooney recalls what he says was his first sexual encounter with Peterson:

I have checked my records as thoroughly as possible, and from what I can tell, the first incident was most likely in 2005 or 2006, in a Virginia (Washington, D.C. area) hotel room . . . I remembered something odd about it. I was sitting on a bed next to Jesse, as physical closeness at that point was not unusual for us. Suddenly, he turned and almost yelled at me, ‘What do you wanna do?!’ I’d never heard him use that tone with me in that manner. . . . Previously, I had already confessed to him — based on his questioning — some of the sexual activities I was interested in in my “fallen” state of mind. So his barked question in the hotel room clearly referred to that. But it startled me. So I responded by telling him again what I’d said before. . . . The next thing I knew he stripped his clothes off and advanced on me sexually. Before I knew it, I was taking part. . . . From this point onward, we carried on a secret sexual relationship that only ended when I stopped it in 2015, before I moved with my family to Tennessee.

Rooney claims that he eventually told his wife and son about his decade-long history of carnal dalliances with Peterson and that Peterson acknowledged it to Rooney’s son. Rooney’s testimony in the film would have been bolstered if his son had corroborated it on camera. Rooney is also the only one of the five disgruntled ex-associates of Peterson’s to be interviewed separately from the others, who are all gathered together in a sleazy-looking motel room as they spill the beans on their former mentor.

Purported Victim #2 Samuel Arambula is a soft-spoken bald Mexican with a goatee who presents as if Davis Aurini were a cholo. He apparently met Peterson at some point in his 20s. He speaks of aggressive and prolonged hugging sessions that culminated on the day at BOND House where Peterson allegedly went straight for the golden goose:

Arambula says that he became frozen with fear as Peterson touched his penis, walked away, and returned to touch his penis repeatedly.

Arman Martikian, a chubby and balding Armenian who is listed as Purported Victim #3, says that a dreadlocked black man named Trayvon Chapman initially told him that Peterson had molested him and gave him blowjobs, which Peterson allegedly referred to as “oral massages.” Martikian also recalled an event when he was in his “very late teens” where Peterson “pulled my pants forward where he kind of looked at it. . . . I remember saying to him, ‘If somebody sees us from outside, they’re gonna think we’re gay.’” Martikian suggests that as a result of his initial reluctance, Peterson backed off and never made any more sexual advances toward him.

Robert Santner, former Bond House manager, claims that he observed all manner of weirdness between Jesse and current show producer James Hake that involved “lots of giggling, kissing, [and] rubbing of one another. . . .” He claims to have walked into a room one day to behold the following bizarre spectacle:

Jesse was sitting in the bed, and while [JLP’s producer and self-described “alpha male”] James Hake was [clears throat] wrapped around bedsheets, completely around like a burrito with his head sticking out, and Jesse was, like, embracing him and hugging him and stuff. And then kissing him on the forehead. And I was like, “Uh, are you all right?”

Martin Francis, the last of the four men in the motel room to give his account, had been an associate of Peterson’s since the mid-1990s and allegedly cohabitated with Peterson in the BOND House for years. He appeared on camera looking worse for wear and tear as a result of a reported bout with cancer. He claims that Peterson made sexual advances upon him that he rebuffed:

He wanted to see if I was willing to have a homosexual relationship with him, of course. ’Cause that’s what he was all about. He was about puttin’ out feelers there and seeing who he could have sex with….He would come into my bed and just lay with me…and at one time even, like, put his hand underneath my underwear to go toward my genitals, right? He never got there because he could see I wasn’t getting excited, right? So he never got there. He’s just like, at the edge. ‘Cause you gotta invite the vampire in.

Critics have noted that Amazing Disgrace offers no direct “evidence” to corroborate the accusations such as e-mails, text messages, or even videos of Peterson humping any of his accusers. Then again, although Peterson may be dumb enough to have sex with so many man while posturing as an anti-degeneracy warrior, even he may not be so dumb that he’d write about it or film it.

Many have noted that it’s dishonest to accuse Peterson of sexual assault or of being a “predator” when none of his accusers say he continued pressing the matter after they displayed reluctance. They also say it’s disingenuous to claim you’re a “victim” when by your own admission you’ve willingly engaged in sex with him for a decade.

Some have murmured that Peterson’s accusers are seeking attention or money. So far, no one has accused Peterson of a criminal act, nor has anyone sued him.

Understandably, after the Johnny Depp/Amber Heard debacle, many are reluctant to believe anything that an ex-lover says about their ex. They are casting Peterson as Johnny Depp in this scenario: a good man who’s contributed a lot of positive things to the world, only to be victimized by the seething cuntiness of lying ex-paramours.

To my knowledge, Peterson has yet to address the film’s accusations. He has every right to sue for defamation if these accusations are untrue.

I hope and pray that the dimwitted little coconut-headed man of God sues them. It would be the funniest civil trial in world history.

« Deconstructing Our Own Religion to Own the Libs