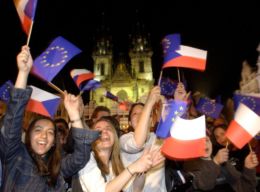 Young Czechs celebrating their nation’s accession to the European Union on May 1, 2004.

The radical attitudes of some of the Central European state’s leaders and their demands to escalate the war with Russia — Hungary is a notable exception — is not the result of these states’ specific historical experiences. If we want to understand them, we need to understand how a layer of aspirants to membership in the global elite was formed there.

How it really was

In Communist Czechoslovakia, sometime around 1980, my mother-in-law (meaning future mother-in-law, as I was 11) was involved in a car accident with some Soviet soldiers. After the accident, she slapped the Soviet military driver so hard that his nose bled. She didn’t have any problems, however; the Soviets fairly paid all the damages, and the slapped Soviet soldier still came to apologize after a few days. He brought my future wife a doll, the kind you couldn’t buy in Czechoslovakia at the time.

I describe this incident to refute the notion that Central Europeans have some horrible memories of the Soviet (basically Russian) occupation. Not at all. Most of us never met the Russian occupiers, and when we did, they were very friendly to the locals. The annoying thing was that we had to listen to stupid slogans about brotherhood with the Soviet Union and the victory of the working class all the time, but it was no more than what is common in today’s corporations. Perhaps the only difference is that many of today’s managers proudly attend woke workshops, whereas back then it annoyed people. Among other things, this is because political correctness is a badge of the upper class, whereas in the Communist regime, Marxist ideology was for everyone.

In the Czech Republic today, it is said that those who suffered most under Communism were those who were born after its end. There is something to that. The image of life under Communist rule that is created in the media is far more horrific than the reality. Many people in the countries of Central Europe really do hate the Russians, but this is partly because of the short historical stages (in Hungary during 1956-58, and in the Czech Republic and Slovakia during 1968-73) and partly because of the arrogant and uncultured behavior of the Russian “golden youth” who not long ago came here as tourists.

Do people want war and sanctions?

None of this can explain the vigorous attitude of most Central European governments against Russia, especially given that these countries suffer more from such sanctions than Russia itself and are most at risk in the event of an escalation of the conflict. An American war fought to the last Ukrainian could easily turn into a war fought to the last Czech or Pole.

As for the popular masses, we do not yet have clear research data on their attitudes. The Hungarian elections showed something: a peace party clashed with an implacably anti-Russian party, and the peace party won by a landslide. In the Czech Republic, the constitution has been effectively suspended and the Prime Minister is calling on citizens to monitor each other’s views and denounce those who disagree with the government’s approach to the war. The Attorney General openly threatens imprisonment for expressing dissent. The situation is very similar in Slovakia, where opposition MPs are being arrested.

Let us not be surprised that open anti-war voices are at a minimum. Even polls are not entirely reliable in such a situation. How many respondents are brave enough to declare an anti-state stance? Data published in the Czech Republic show that a solid majority of 60% demand a halt to arms shipments to Ukraine. If there was a free atmosphere, would 80% say so? We don’t know.

The first wave of the local Central European elites is linked to privatization. In 1990, everything was state-owned: factories, shops, entertainment, infrastructure, schools, land, banks, most housing . . . everything you can imagine. And it was in good shape. Communist central planning of the economy is very bad for introducing innovation and is not flexible — for example, when one toilet paper factory burned down, there were shortages in Czech shops throughout the entire following year because other factories couldn’t increase production. Nor can it produce attractive consumer goods. But its strength is stability. State assets were in decent shape, and the country was not in debt, so there was plenty to give away. Central European governments gave away huge fortunes, and whoever had the right connections became a tycoon. But that period ended, because after a few years there was nothing left to give away.

The second wave of local elites was created in the decade around the Czech Republic’s accession to the European Union, when foreign corporations entered the Czech market — but don’t imagine that they were bringing in capital. Local governments paid multinational corporations to come in and take a business, a bank, a water pipe, and so on. Often the next step was for the multinational corporation to close the Czech business to get rid of the competition. Sophisticated manufacturing, which often had a tradition of 150 years or more, disappeared. It was replaced by the production of simple components. For the Central European countries this meant economic disaster, but for the individuals who worked for these corporations locally, it meant personal enrichment — not on the same scale as the privatization wave, but still very respectable.

George Soros’ non-profits and many others were likewise entering Central Europe at that time. Today they effectively control Czech education, Czech public media and have a strong position in the Czech judiciary. Their first local managers have also become quite wealthy. So have the owners of the law firms that worked for them.

But that period is also now over. There is nothing left to privatize and nothing to give away to foreigners. Everything important belongs to them. All the important decisions are taken abroad. Thus, the other contenders for membership in the elite have only one option: to get into the global structures, such as by getting a position at a corporate headquarters, the United Nations, the World Health Organization, or the European Commission. But they’re finding it extremely difficult to do this. There is a lot of competition, and there is no interest these institutions in bringing in more competitors from Central Europe — especially if those people are white.

Two strategies to get to the top

In such a situation, there are two strategies to choose from. The first is that such contenders can network and support each other. A Pole who becomes a global marketing director can start recruiting Poles, Czechs, and Hungarians into his department. In meetings, he will help to promote ideas that will strengthen his colleagues from the same region. After all, members of certain ethnicities and religions have been doing this for generations, and quite successfully.

But this requires an ideology that unites them, and it also involves risk. Your Central European fellow tribesmen will support you, but you can expect a more cautious or even dismissive attitude from others, so it’s a strategy that is only suitable where some of you are already at the top, but problematic in cases where all of you are trying to climb the ladder.

And then there is the second option: Ditch your own country and try to draw attention to yourself. Be much more radical than your Western competitors. Demand things that they are reluctant to demand. Attempts to go down this road on migration and the Green Deal have been met with mass popular resistance in Central European countries, but time is passing, those countries are gradually adapting to the West, and their elites are no longer reluctant to repress their populations — much like the Communist ones. And most people absolutely don’t care about such things until they see it reflected in their utility bills — so it’s an opportunity to get off the ground.

My guess is that it will be successful and that there will be more Polish, Czech, and Slovak names in the world headquarters over the next few years — but it won’t be nearly as successful as today’s Central European leaders imagine. When you hear them speak again, do not let them tell you that they are defending their countries.

After all, it is no different with the Ukrainian leadership.