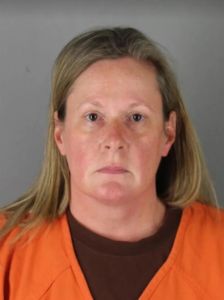 Kimberly Potter, the former police officer who was recently sentenced for accidentally shooting future doctor Daunte Wright while he was fighting with another officer.

On April 11, 2021, white Minneapolis police officer Kimberly Potter shot and killed Daunte Wright, a 20-year-old mulatto male who was driving with an expired license and an air-freshener hanging from his rearview mirror (which is apparently illegal in Minnesota). The entire encounter was captured on police dashcam video, which was played during Potters’ trial late last year.

After pulling Wright over, she and her fellow officers realized that Wright had an open warrant out for his arrest. He had allegedly taken part in a robbery and had then skipped out on his court date, fled from officers, and was charged with illegal gun possession. As black officer Mychal Johnson was attempting to cuff him by the side of his car, Wright squirmed free and hopped back into his vehicle, seemingly intent on driving off and once again eluding police.

As Johnson reached into the car and attempted to restrain Wright, Potter pulled out what she thought was her Taser, and shouted “Taser! Taser! Taser!” Wright, however, ignored her and continued struggling with Johnson. Realizing that her partner was vulnerable and would be dragged to certain injury or death were Wright to step on the gas, Potter fired her weapon. It was her pistol, however, not her Taser, that she had inadvertently drawn.

It was the worst possible mistake she could have made — aside from risking her partner’s life by not firing a weapon at all.

At this point in the encounter, two things had become clear. First, Potter was justified in her concern that Wright would drive off, because he did exactly that moments after being shot. Second, she had struck him in the chest. Wright died soon later. After this, the poor woman collapsed in tears by the side of the road, inconsolable to all around her.

The resolution of these events played out as one would expect. Blacks everywhere were outraged and called for Potter’s head. Potter and the police were abjectly apologetic and grief-stricken, while politicians and the media wasted no opportunity to sing the praises of the deceased criminal Wright while blaming his killing on” systemic racism” in America. They also reminded white America of its collective guilt in the death of black saint-felon George Floyd the previous year. (Justine Damond, a victim of actual police malfeasance in Minnesota, unfortunately attracted less attention).

In her trial last November, Potter was found guilty of first- and second-degree manslaughter, but in a mildly positive turn of events, was only sentenced to 24 months in prison at the sentencing hearing this past February. (Of course, she should have been sentenced to zero months in prison, but the days of giving whites the benefit of the doubt in such matters are long gone.) The Minnesota Attorney General’s office had sought an overly punitive sentence of seven years.

Thankfully, Judge Regina Chu chose leniency, apparently swayed by the mountain of mitigating evidence in Potter’s favor. This includes Potter’s effusive remorse, cooperating with the authorities, not being a threat to society, and having a squeaky-clean record. Furthermore, hundreds of people had written letters to Judge Chu on Potter’s behalf. With good behavior, Potter is expected to serve only two-thirds of her sentence.

Having viewed the dashcam video, I can safely say that Kim Potter did not behave recklessly or negligently, as the prosecution had claimed. She was placed in an extremely difficult and dangerous situation by the illegal behavior of a suspected criminal and fugitive. She had seconds in which to act in order to do her job, save her (black) partner from harm, and perhaps save herself as well. Who could have known whether or not Daunte Wright was diving into his car to grab a firearm?

At this point muscle memory takes over, and trained individuals do what they are trained to do without thinking. There is no time to think. I’m reminded of a story a shooting instructor once shared with me. Sadly, I cannot find it on the Internet, but as I recall it involved a pair of armed guards at a bank who had recently been issued new holsters, after which pistols were situated differently than before. As bad luck would have it, their bank was robbed shortly after, and when the two men went to draw their weapons, they reached for where their guns used to be. Not only did they grab air, they aimed their non-existent weapons at the robbers as if they hadn’t drawn air. That’s how dominant muscle memory can be during times of crisis — and in this case, this mistake, which occurred within the all-too-brief span of two seconds, cost the security guards their lives.

I have no doubt that Kimberly Potter made the same kind of mistake in a situation which was potentially just as deadly. She’s innocent until proven guilty, after all, so why shouldn’t the Minneapolis District Attorney’s office have made the same assumption? We all know why: Kim Potter is white and Daunte Wright was black. These days, blacks are a protected class and whites are a demonized one, regardless of the vast disparity in crime rates between the two groups. If not for the anti-white stance of our political elites and of blacks in general, today Kim Potter would be the free woman she deserves to be.

But what I find so interesting about this story is not this racial double standard, nor the sheer vindictiveness expressed by the organized black community. Nor is it the crocodile tears that many in media and government professed to shed over the loss of this black thug. Such phenomena have been all too common since George Zimmerman killed Trayvon Martin in self-defense in 2012.

No, what I found most interesting was Daunte Wright’s mother.

This is a white woman who chose not to forgive Potter and was quite public about it. She not only gave emotional testimony at the trial, asking the judge for the maximum sentence, she also expressed her outrage over the sentencing to any reporter who would listen. In these interviews, she trashed the justice system and accused Potter of murder. She also (hilariously) played the race card:

After Friday’s hearing, Wright’s mother told reporters her family was “very disappointed” with the sentence.

“This is the problem with our justice system today. White women tears trumps justice,” Katie Wright said. She thought her own “White woman tears would be good enough,” she said, “because they’re true and genuine.”

We can expect some mama-bear bias here, of course. Katie Wright isn’t the first grieving mother to attest that her deceased criminal progeny “had a smile that was worth a million dollars.” But spitting pure venom at the obviously remorseful culprit, as well as associating with Black Lives Matter terrorists — even after they attempted to intimidate Judge Chu — goes well beyond that.

Katie Wright strikes me as the kind of white person that is so common these days who fetishizes the outgroup. She’s a race-mixer, so that much is clear. But to lose all compassion for the police officer who made a grave, yet honest, mistake during an avoidable situation that her criminal son had created when he foolishly resisted arrest indicates that she’s gone over to the other side. That she claimed that Potter received a less harsh sentence because of her race rather than admitting that it was Potter’s race that got her in such legal trouble to begin with only seals the deal. Katie Wright, like so many whites these days, might as well be black.

When you fetishize any group of people, you expand their virtues as far as possible and downplay their vices to insignificance. This seems to grow out of the herd instinct of self-preservation we all have. Since no man is an island, membership in some kind of community is something we all seek out and require for a stable, productive life. Fetishizing — as opposed to merely identifying with — a group turns identity into an obsession. Did William Wallace fetishize the Scots? Did John Calhoun fetishize American Southerners? Did Adolf Hitler fetishize the Germans? Better yet, do Abraham Foxman and Jonathan Greenblatt fetishize Jews?

Do we, as White Nationalists, fetishize whites? Maybe some of us do. I’d like to think that the leaders who have risen to the top of our movement through hard work, talent, and persistence over the course of decades have avoided this trap and instead keep their white identity sound and healthy rather than obsessive. Whites — that is, self-identifying, race-realist whites — are not always right and can behave, for lack of a better term, deplorably. We need to remain clear-eyed about this when we consider what’s best for our group. But fetishizing the in-group has the advantage of keeping it all in the family, so to speak. If a fetishizer can keep his obsession under control, he can still most likely find a home within his natural ingroup.

Fetishizing the outgroup, however, carries with it the danger of the burned bridge. Once you go black, you never go back, to appropriate a vulgar expression less vulgarly. Outgroup fetishizers like Katie Wright — or more articulate examples such as Shaun “Talcum X” King and Jessica “La Bombera” Krug –fetishize to extremes because they know they have no home to return to. I imagine half-breeds such as Frederick Douglass and W. E. B. DuBois faced similar dilemmas when choosing to fetishize one lineage over another. Such people make their outgroup their home by out-outgrouping the outgroup, if that makes sense. This isn’t healthy; it harms their former ingroup, and their relationship with the outgroup will always be somewhat shaky, despite all their enthusiasm.

This is the position increasing numbers of whites in Europe and America are finding themselves in these days: identifying more with the outgroup than the ingroup. This inevitably leads to the hard-hearted, unforgiving stance taken by excessive fetishizers like Katie Wright. She can forgive her son for being involved in armed robbery, for being a fugitive, and for willfully endangering police officers during his arrest, but she can’t forgive a white police officer for an honest and all too human mistake made in a dire situation that was created by her son’s own bad behavior.

Apparently, the time for forgiveness is over — but that cuts both ways. I think whites everywhere will take a significant step forward in our evolution as an independent people once we decide we can no longer forgive turncoat fetishizers like Katie Wright.