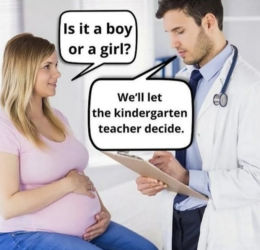 Author’s Note: In a recent livestream, Miko asked me to share my thoughts about Libs of TikTok. Hyacinth Bouquet transcribed my answer, and I have cleaned it up and expanded it. I want to thank Miko and Hyacinth for their help.

When I was in middle school, sex education consisted of three or four slide shows and question-and-answer sessions presented by our gym coach on days when it was too rainy to go out on the field. The classes were occasioned by the onset of puberty and focused on basic reproductive biology and hygiene. The classes were sex-segregated, and apparently the girls had these sessions a year or so earlier.

Even in those pre-internet days, I don’t think any of it was news. The purpose of the class seemed to be to fill in any gaps in what one’s parents had told us, in case students still thought that babies were brought by the stork. The whole thing was awkward. There was some nervous laughter. But the coach was very professional, and that was it.

None of these classes touched on sexual ethics or religious teachings about sex. Words like “gender” and “identity” were never mentioned. It was simply factual reproductive biology and hygiene, appropriate for a gym coach or biology teacher to cover.

I think such sex-ed classes are completely appropriate, and I tended to be dismissive of people who complained about them on religious grounds. Nobody was preventing them from passing along their views to their own children, so I suspected that their real objection was that their views were not being propagated to everyone at public expense. The same people were also complaining about teaching evolution in biology class.

For years, I tended to dismiss those who complained about sex ed as the same sort of proselytizers. Then I learned about Libs of TikTok. Libs of TikTok was a Twitter channel run by an Orthodox Jewish woman in New York. The channel simply reposted public TikTok videos without editing or editorializing. But the content was shocking enough on its own to provoke an enormous public backlash.

It turns out that sex ed has changed a lot since I was in middle school. In these videos, preschool and elementary school teachers talked about sharing their pronouns and concepts like gender fluidity with children as young as five. None of these people look wholesome or normal: wild eyes, unhealthy complexions, pink hair, blue hair, green hair, facial piercings. Some of them look like literal demons.

Most normal people who saw these videos were horrified, especially the parents of young children, who naturally want to protect their children from these freaks. No sensible parent would trust their children to such people.

In the minds of liberals, there is nothing wrong with these women — or whatever; I assume they’re women — bragging about introducing your five-year-old to their sexual neuroses and hang-ups. But there’s something very wrong about getting normal people to notice it. Libs of TikTok noticed it, and got other people to notice it, and that was her crime.

People noticed and pushback ensued. People started asking, why are these freaks being allowed to sexually indoctrinate preschoolers?

Naturally, the freaks were upset. They felt threatened. They started throwing tantrums. They decided that Libs of TikTok needed to be doxed. Then Taylor Lorenz, a lesbian neurotic working for Jeff Bezos’s paper, The Washington Post, doxed Libs of TikTok. I urge you to look at Tucker Carlson’s hilarious expose of the whole freakshow:

It has come out that Libs of TikTok is a Jew. Predictably, there are people in our sphere who immediately think, “If a Jew is involved, no good can come of it.” I don’t take that view. No matter what her ethnicity, religion, or ultimate agenda are, she did us a service. Jews are an objectively privileged group in America. If Libs of TikTok is willing to put her Jewish privilege and insider powers to work advancing things that help us, I say great! Use your Jewish social capital in a good way, not a bad way.

I similarly want to congratulate Amy Wax, a Jewish law professor at the University of Pennsylvania. Amy Wax was involved with the first National Conservative Conference and created some controversy saying things that are absolutely true about nonwhites in America. She’s recently made more controversy [2] saying more absolutely true things about nonwhite resentment against white civilization. If Amy Wax wants to use her Jewish social capital and insider cred for doing good things rather than nefarious things, I applaud her.

I also hope that the Orthodox Jewish community uses some of their social capital to go after the freak who doxed Libs of TikTok. They are a formidable force. I hope that absolute hell is rained down upon the scumbags who doxed her. It shouldn’t end with the reporter who wrote the story. It should end with the people who green-lit her investigations and published them. It should go all the way to the top, as far as the buck goes.

But most girls come out of sex-ed classes not knowing anything about their biological clock. Most girls come out of sex-ed classes thinking that the responsible thing to do is wait until they’re psychologically ready to have kids, which basically means when they feel like it. They are not taught that when they get pregnant, nature will make them feel like it through hormonal changes. So women who wait until they feel like having kids often never have kids. They will run out their biological clock waiting for a feeling that never comes.

Kids today learn a lot in sex ed, but they don’t learn absolutely essential information about reproducing the race, and they are being exposed to it much too early. It simply needs to be stopped.

If teachers insist on sharing their pronouns and their gender fluidity with five-year-olds, they need to be fired from their jobs, barred from teaching, and be put on a sexual predators list, so they won’t even have kids coming to their house to Trick-or-Treat.

The “okay groomer” meme is overblown, but there is a lot of truth to it. Some of these freaks really are trying to recruit. Others are “merely” trying to corrupt. Some of them, surely, are not literal child predators. They “merely” wish to share their misery and confusion with impressionable and vulnerable children. But better to err on the side of caution and get them all out of the classroom.

Most people don’t care about what schoolteachers do in their private lives. But they need to be professional enough to keep it private.

Thus far, the legal pushback — for instance, in Florida — has been extremely weak. The idea that it is controversial to say that you can’t expose children to vibrators and gender fluidity until they’re eight is itself a sign that we are an insane society. How about we wait until puberty and confine sex ed to biology and hygiene? “Gender” is a concept from grammar; it has no place in sex-ed class.

Libs of TikTok has performed an important service to the nation. Like everyone who is doxed, she needs to double and triple down. She needs to go from being a part-time and furtive activist to a full-time and open one. I hope she is followed by an army of imitators. We should never cower in the face of doxing. We should go on the offensive and make the Left regret trying it in the first place.

[3]If you are already behind the paywall and want to share the benefits, Counter-Currents also offers paywall gift subscriptions. We need just five things from you: