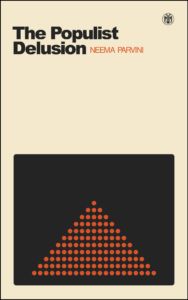 Neema Parvini, Ph.D., is the author of five books on Shakespeare who in recent years has turned his attention to political philosophy, including the broader Dissident Right. In our sphere, he is known as Academic Agent.

Parvini’s The Populist Delusion is a critique of populism and democracy from the Right. Parvini devotes eight of his ten chapters to the views of important “elite theorists” (Gaetano Mosca, Vilfredo Pareto, Robert Michels, James Burnham, and Samuel Francis) as well as allied thinkers (Carl Schmitt, Bertrand de Jouvenal, and Paul Gottfried). Parvini’s book is brief (145 pages of text plus front and back matter), so his discussions are necessarily brief as well, serving as introductory overviews (or refresher courses) on a number of very important thinkers of the Right. For this, I can recommend Parvini’s book, which is lucidly written and focuses on essential issues.

However, I disagree with Parvini’s overall thesis about the delusional nature of populism:

The thesis of this book has been that democracy is and always has been an illusion, in which the true functioning of power where an organised minority elite rule over a disorganised mass is obscured through a lie that ‘the people is sovereign’. I have called this ‘the populist delusion’ because of the number of lies that this central lie conceals, chiefly the myth of bottom-up power or ‘people power’ . . . (p. 143)

Parvini uses democracy and populism as interchangeable throughout his book. I have no quarrel with this, since both terms have been used to refer to the idea of popular sovereignty: to use Abraham Lincoln’s words, “government of the people, by the people, for the people.”

Why does Parvini think that the idea of popular sovereignty is a delusion? Simply because he looks around the world and does not observe self-governing peoples (government of the people, by the people). Instead, he sees some people governing other people, specifically minorities governing majorities. Therefore, majority rule or popular government are illusions. But this doesn’t follow.

One could try to counter Parvini’s argument by pointing out instances of popular sovereignty at work: New England town meetings, the popular protests that brought down communism, and populist referendums, plebiscites, and movements that confound and upset elites.

But the deeper problem with his argument is methodological. Popular sovereignty is not the sort of thing one can observe empirically, because it is a norm, an ideal, and empirical realities only imperfectly instantiate ideals.

If this is true, then there is no necessary conflict between elitism and populism, so as long as elites are merely means for serving the end of the common good. (See my essay “Notes on Populism, Elitism, and Democracy” reprinted in New Right vs. Old Right.)

Although populists wish to empower the majority and increase their political participation, they recognize that direct rule by the full people is an impossibility.

First of all, some people are incapable of participating in government because of age or inability. But they are still part of the people. They still have interests. And since they cannot look out for their interests, others will have to look out for them. In short, some form of political representation is unavoidable. (For more on the necessity of representation, see my essay “In Defense of Populism,” reprinted in White Identity Politics.)

Furthermore, government by the people still requires officials who will carry out the popular will. Since people are not equal, it is better for everyone if those who execute the public will are better than average in terms of character, knowledge, and skill. In short, the ideal of government “by the people” can never be fully realized.

However, the ideal of government “for the people”—for the common good—is more easily realized. It can be accomplished by monarchical, aristocratic, popular, or mixed regimes. But it is more likely to be accomplished if the rulers are part of the people, rather than foreigners, and if as many of the people as possible are politically empowered, which means an Aristotelian mixed regime in which the one, the few, and the many have power, but the regime as a whole serves the common good. In other words, populists recognize the inevitability of elites, but they have no objection to elites as long as they serve the common good.

Now if you are empirically minded, this is actually an accurate description of the “really existing” populism that has today’s liberal democratic elites in a tizzy. Really existing populists do not demand that the full people exercise direct sovereignty. Such a notion would never occur to them. Instead, they accept that societies are inevitably split into ruling elites and ruled masses. They simply think that their elites are arrogant, corrupt, and govern for factional (and foreign) interests rather than the good of the nation as a whole. Therefore, they support a diverse array of tactics—populist referenda (Brexit), populist parties (Fidesz), populist strongmen (Trump, Orbán)—to bring government in line with the interests of the people. In short, really existing populists recognize that government “for the people” (the ultimate end) is more important than government “by the people” (the means), although they recognize that more involvement by the people can’t hurt. (For more on contemporary populism, see my speech “National Populism Is Here to Stay,” reprinted in White Identity Politics.)

If actual populists have no objection to elites as such, merely to corrupt, arrogant, and estranged elites, then simply rehearsing the arguments of various elite theorists does not prove that populism is a delusion. Indeed, many of the thinkers Parvini discusses (Pareto, Michels, Schmitt, De Jouvenal, Francis, Gottfried) openly aligned themselves with populist political movements and figures, from Mussolini and Hitler to Patrick Buchanan and Donald Trump. Others like Mosca and Burnham upheld the idea of the mixed regime, believing that elites governed better if the masses had political power. Thus populists should pay careful attention to Parvini’s analyses of these thinkers, who are actually very useful to populism. But Parvini’s conclusion that populism is a delusion simply does not follow.

Even though Parvini’s central thesis does not follow, his approach to political philosophy is very much in harmony with the elite theorists: Mosca, Pareto, Michels, Burnham, and Francis. All of them are Machiavellians, which is to say political “modernists,” whereas I am a follower of classical political philosophy, primarily Plato and Aristotle.

For instance, all of the elite theorists would sign off on Burnham’s claim that:

. . . The primary subject-matter of political science is the struggle for social power in its diverse open and concealed forms.

(Contrary views hold that political thought deals with the general welfare, the common good, and other such entities that are from time to time invented by the theorists.)[1]

This methodological principle explains why Parvini regards popular sovereignty as a putative empirical fact, which can be falsified by empirical study, rather than as a norm or ideal.

The Machiavellians hold that material interests—primarily the struggle for power and wealth—rather than ideas and norms are the driving force of history. As Burnham puts it, “The primary object of every élite, or ruling class, is to maintain its own power and privilege. . . . The contrary view is that the primary object of the rulers is to serve the community.”[2] Note that Burnham’s language simply ignores that the “contrary” view is a norm, not a factual statement. Like Parvini, he then refutes the classical view by pointing out that actual statesmen seldom live up to the norm—as if this would surprise Plato or Aristotle.

One of Burnham’s basic principles is that “The laws of political life cannot be discovered by an analysis that takes men’s words and beliefs, spoken or written, at their face value.”[3] This is because Burnham regards ideas not as driving forces of history but merely as tools of the struggle for power, which is the real force behind historical events. For instance, Burnham states that ideas like the common good are usually put forward by “spokesmen for an élite” to justify its power.[4] Another of Burnham’s basic principles is that “The rule of the elite is based on force and fraud.”[5] Of course, if ideas don’t matter, why would one have to peddle fraudulent ones? One also wonders if Burnham’s ideas are fraudulent tools of elite power. Should we take his ideas at face value, or should we ask what power interests he was serving?

The creators of modern “political science” like Machiavelli knew that not all men are cynical, self-interested materialists, but they wanted them to become that way, because they thought it would make the world a better place: it would remove the principal causes of social conflict and reorient society around the pursuit of material wealth. They were not describing facts. They were creating them by upholding new ideals, new norms of behavior, while pretending that they were just describing the way things always were.

Modern “political science” is first and foremost a form of political legislation that cloaks itself in the language of value-free science. Of course, most advocates of political modernism sincerely believe that what they are saying is true. And increasingly, it is true, because of the steady advancement of the modernist project.

But once we are wise to Machiavelli’s trick, the question again becomes about how men and societies should be. We return, in short, to the questions of classical political philosophy. If, in that spirit, someone wishes to write a book entitled The Populist Ideal, he will find Parvini’s The Populist Delusion to be a useful starting point.