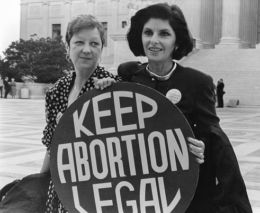 Norma McCorvey (left), who was Jane Roe in Roe v. Wade, with her attorney, Gloria Allred, in front of the Supreme Court in April 1989.

The Supreme Court (SCOTUS) will soon end Roe v. Wade, the famous 1973 case that made abortion legal throughout the United States. The new decision [2], revealed in an unprecedented leak from the high court this week, would not ban abortion; it would simply revoke the precedent that prevented states from banning the procedure. Abortion will still be legal for most Americans after the SCOTUS ruling. There’s even a chance the ruling won’t lead to any bans at all.

The most likely scenario is that the ruling codifies the situation that de facto exists across the country. It’s already very difficult to get an abortion in a few deep red states such as Mississippi. For their part, solid blue states like New York allow abortion in the third trimester. America will still be a place where a handful of red states don’t allow abortion while a dozen or so blue states have the most liberal abortion laws in the world.

This one decision has roiled American politics. Conservatives see it as a major victory after 49 years of trying to overturn the precedent, and are gleeful about what may happen next. Liberals see it as a harbinger of The Handmaid’s Tale becoming reality. Both sides are reading more into this decision than what’s likely to happen. Yet, if this is in fact the court’s decision, it will impact the upcoming election. The “if” is important. It’s unclear why the decision was leaked, or who did so. The opinion, authored by conservative Justice Samuel Alito, may not be the majority opinion when the court officially delivers its verdict this summer. It might possibly have been leaked to pressure one of the conservative justices to switch sides. We don’t know. But it’s likely to hold.

A crucial question we should ask is if this is a victory for us. Probably not. It’s not necessarily a defeat for us, either. If you’re a conservative Christian who sees abortion as murder, then yes, it’s a huge victory for you — but it’s not an identitarian issue. If you look at the demographics of who gets an abortion, some identitarians think we need to be pro-abortion. Despite still being the majority in America, whites are in the minority of those who get abortions. Black abortions far outstrip their percentage of the population [3]. This fact is used to argue both for and against the practice. Liberals say it’s racist to deny minorities an abortion, while conservatives say it is black genocide. Each side appeals to the sacred icon of anti-racism to fortify their position.

Identitarians could offer a racialist argument for abortion, but it would likely alienate many of the people we want to reach. Most white conservatives, even the ones who are race conscious, see abortion as baby murder. They don’t care that it affects blacks more than whites and that its abolishment may lead to an even worse demographic situation. They view it as a moral issue, and any pro-abortion argument repulses them. We could spend what little capital we have to persuade them to come to our view, but it would distract from our main issues and make us lose followers in the process. Many nationalists and identitarians are avowedly pro-life as well, so it would inevitably lead to messy infighting within our own circles — not that Right-wing infighting is ever at a low ebb.

It would make tactical sense to proclaim ourselves as pro-life, but abortion isn’t really our issue. Plenty of other groups, much more powerful and respectable than ourselves, dedicate all their time and resources to it. They don’t need us “racists.” We could also potentially alienate some within our ranks, as well as potential converts. There’s no real need for us to get involved as a movement or to have an official stance. It’s best to just assume it’s not our fight and leave it at that. Individuals can of course advocate strongly on the issue in their private capacity, but it’s still not the main concern for nationalists. Most importantly, abortion shouldn’t serve as a litmus test. Our guys can take either side on the issue. It shouldn’t be used as a reason to drum someone out or castigate them as a traitor.

With all that said, we should still take note of this development, as it will impact American politics for years to come. It will further polarize America and inflame political tensions. That’s a good thing for us. But how will it play out in the political sphere?

It may turn out to be a dud in the short term. It all depends on how many Republican-controlled state legislatures attempt to enact full bans on abortion. 13 states [6] have trigger laws on the books that will immediately ban abortion if Roe v. Wade is overturned. There are other red states that don’t have trigger laws but which would likely ban abortion. One such is Alabama, which passed a full ban in 2019 [7] that was overturned by the courts. Whether these states will actually enforce these trigger laws is another matter. It’s one thing to pass a law when there’s a dim chance it will ever be enforced and it’s not on voters’ minds. It’s quite another to enact it when it will be enforced and weighs heavily on voters’ minds.

There’s a chance this effort may jeopardize Republican prospects in the midterms. At the moment, the GOP looks like it will win back Congress in November, but outrage over abortion bans could alter that in battleground states. It needs to be kept in mind that roughly 60% of Americans [8] believe abortion should remain legal in most cases; 39% say it should be illegal in most cases. Polling regarding heartbeat bills, which restrict abortion after six weeks of pregnancy, show a similar divide among the American public: 55% oppose the laws while 45% support [9] them. But these numbers change dramatically in favor of the legal side when it comes to full bans. Only 14% of Americans [10] say they support Alabama’s full abortion ban, which grants no exceptions even in cases of rape or incest. It’s not even a popular idea in one of the reddest states of the country: Just 31% of Alabamians [11] told pollsters they supported an abortion ban with no exceptions.

The bad news for conservatives is that young people are more likely to call themselves pro-choice. 56 percent of Americans between the ages of 18 and 29 say they are pro-choice. This contradicts the conservative narrative that millennials are the “pro-life generation [12].” Based on the evidence, millennials may in fact be the pro-choice generation. And a recent survey from the Public Religion Research Institute [13] found that 65 percent of young adults (18-29) believe abortion should be legal in most cases. Only 44 percent say it offends their personal values.

Deep red states also boast [14] surprising figures on abortion. The majority of adults in Montana, Nebraska, and Oklahoma believe abortion should be legal. The only states where strong majorities believe it should be illegal are in the South.

At one time, it wasn’t unusual for some Republican politicians to be openly pro-choice. It was also the common position for Republicans to support exceptions to abortion in the cases of rape, incest, or threats to the mother’s health. That’s not the situation today. The pro-life movement has insisted that there shall be no exceptions to an abortion ban, and the party has dutifully followed along. Thus, they won’t be content merely with heartbeat bills; they will push for the full bans with no exceptions. That will lead to an interesting battle within the GOP over what to do. Do they bow to the pro-life movement’s demands and risk electoral defeat, or do they try to strike a balance between voters and their pro-life backers? My guess is that they will do the latter. Republicans aren’t wont to risk their political fortunes over abortion. But hey, who knows? Maybe pigs will fly this summer.

There will be those on the Right who insist this court decision is a victory for two different reasons. One is that they take Leftists at their hysteria [15] and claim the decision will serve as a precedent to wipe away other liberal victories. Liberals worry and Right-wingers salivate over the prospect that this decision may set in motion the repealing of Obergefell v. Hodges, which made gay marriage legal throughout the country. Some dreamers even wonder if it could overturn the Supreme Court’s decisions on interracial marriage and school integration.

None of these things are likely to happen. A reversal of Obergefell was a realistic idea immediate after the ruling was made in 2015, but that moment is long gone. The GOP no longer cares about gay marriage. Neither does the Religious Right. Extremely online Right-wingers are the only people to bring it up these days. In order for gay marriage to be overturned, a state would have to challenge the ruling, and it’s doubtful that any state will vote to ban gay marriage in the near future. Pro-lifers sent “LGBT for Life” groups [16] to heckle pro-choice protesters, indicating their fealty to the gay cause. For better or worse, it’s an issue the country has moved on from. The same applies even more strongly to interracial marriage and school integration. Do you expect Clarence Thomas to outlaw his own marriage? These are just fantasies.

The second argument is that striking down abortion is good because the issue is an idol for the Left. This is true, but the arguments used to strike at this idol reinforce other idols. Conservatives are more comfortable being radically pro-life than radically anti-immigration or anti-gay marriage because many of the arguments against abortion fit nicely within modern liberalism: “It’s racist.” “It’s black genocide.” “It’s eugenics.” “It preys on women.” Abortion is attacked for violating the norms of modern liberalism. Tearing it down doesn’t necessarily undermine the regime’s dogmas; it reinforces racial egalitarianism and fealty to anti-racism. Those are more our concern than abortion.

It’s doubtful this decision will shake the regime to its core. Corporations don’t even bother to boycott states [17] that pass heartbeat bills — but they will do so against states that try to reform election laws or honor the Confederate flag. Some idols are more important to the system than others.

Again, abortion is not our fight. Let the mainstream conservatives handle it. If most states keep abortion in place, it will have negligible demographic effects. There’s no chance of a nationwide ban passing, and many of these red states will falter in banning the practice. Much will remain the same in a post-Roe America. We shouldn’t allow it to distract us from the real struggle.

[18]If you are already behind the paywall and want to share the benefits, Counter-Currents also offers paywall gift subscriptions. We need just five things from you: