If I Lost Hope 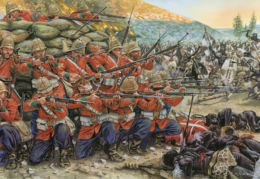 The Battle of Rorke’s Drift, one of the unexpected victories of history.

Author’s Note: In a recent livestream, a long-time listener, Sutton, asked me, “Greg, what would you do if you decided that the cause is hopeless?” I revisited this question in a later livestream. Hyacinth Bouquet transcribed my answers, and I combined them and cleaned them up a bit. I want to thank both Sutton and Hyacinth.

That’s a very interesting question. “The cause,” of course, is saving the white race.

Believe me, I often wonder if there are enough serious people to save our race in America and around the world. However, I believe it is still possible to win; therefore, I’m still here.

So what would I do if I lost hope?

My first answer is very simple. It doesn’t require any nuance. If I believed the cause is hopeless, I would quit.

The only reason anybody would stay involved in White Nationalism in a public way if he believed that it was hopeless, would be for selfish reasons.

Nobody gets involved in White Nationalism for the money. Most people get involved because of conviction. But some of them lose their conviction, and since they can’t go back to mainstream life, they are forced to stay involved. So they go from fighting for what’s right to sticking around just because there’s money in it. It might not be a lot of money, but it might be the only money that they can hope for. If such a person doesn’t need money, but sticks around after losing hope, chances are it is for simple ego-gratification. He might simply enjoy being a big fish in a small pond or playing the villain to the mass media.

So the simple answer is: If I believed that victory was impossible, I would quit; and if I didn’t quit, I would be a grifter.

However, there is a more nuanced answer: If you are doing something that you think is your duty, you don’t really calculate the chances of success at all. Even if it seems hopeless, you are still obligated to do your duty. Do your duty, and let God sort out the rest. To do what’s right, regardless of the consequences, is a noble attitude, so maybe you could carve out some kind of exception for people who say, “I really do believe in my heart of hearts that it’s hopeless; but I believe it’s my duty to fight to the last man.” Maybe you could say that person isn’t just being a grifter.

You have to believe that victory is at least possible. You can’t know for sure, because nobody can be sure about such things. But if you have a solid conviction that it’s hopeless, that’s going to infect everything you say and do, and you’re not going to be an effective spokesman, or an effective fighter, and you should get out of the way of people who are unencumbered by hopelessness.

You might want to stay in the fight somehow, but if you don’t believe that victory is possible, you should get off the stage and cede place to somebody who does; because people who have that conviction are more likely to produce a victory than you are. If you’re really concerned about doing your duty, that’s the duty that you should perform.