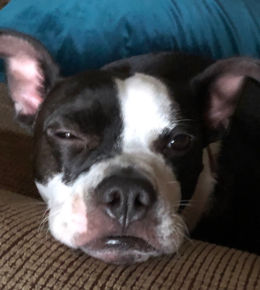 My dog Junior is a 35-pound Boston Terrier/Boxer mix with the most consistently sweet disposition of any animal I’ve ever owned. He’s a great little guy, and except for his occasional bouts of gassiness, I can’t think of a bad thing to say about him. Yesterday morning while taking him for a walk through my slowly decaying lakeside Georgia community, I was suddenly forced to risk my life in an attempt to save his.

I wouldn’t do such a thing for many people besides my wife and son. In fact, my wife and son are the only two humans on Earth whom I’d choose to save over Junior. The rest of you are on your own.

About a year ago and a block away, a black family moved into a previously unoccupied house with their three pit bulls, whom they keep chained in the backyard all day and all night, all summer and all winter. Since neither the Homeowners’ Association nor the local police seem to ever do anything about overgrown weeds or garbage strewn across front lawns or dogs who bark as loud as cannons all night long, we’ve had to bite our lips and lose sleep and endure the vibrant enrichment of what sound like howling concentration-camp dogs for a year now because to protest would be considered racist, with all of the risks attendant to being considered racist these days.

Figuring that the trio of canine public nuisances were safely chained in their backyard, I made the intrepid decision to finish my half-hour walk with Junior by taking a homeward course that brought us right past the front of my rude, messy, obnoxious, and inconsiderate neighbor’s house.

I did not expect to see all three pit bulls in the front yard, unchained and ready to strike. There was also a little black girl, maybe eight or nine years old, standing out front with the dogs.

When a black family owns pit bulls, I automatically assume the pit bulls are black, too. It’s one of the most racist things I do.

Realizing I’d inadvertently exposed Junior to a potentially fatal encounter, and also realizing that a pack of pit bulls can smell fear like it’s a bad cologne, I promptly picked up Junior, cradled him in both arms, and started walking the remaining block to our house.

The little black girl tried assuring me that the dogs wouldn’t hurt us. She tried assuring me of this while the dogs were nipping at both me and Junior. I exasperatedly said something like, “Jesus fucking Christ, if those dogs try hurting either one of us, I’ll do everything I can to kick their heads in. You should also know that letting the dogs run free like this is illegal!”

And I was serious. Even though I knew that me and Junior were no match for three pit bulls, I was willing to fight for both of us because fate had suddenly left me no choice. For reasons I’ve never quite been able to untangle, I am psychotically fearless in moments of great danger, whereas most of the time I’m hovering at Larry David levels of neurotic.

Junior and I got home safely and I switched back into neurotic mode, wondering what the girl would tell her father. I’m under the impression that black people don’t like when white people tell them they’ve done something illegal. And I wasn’t being purely paranoid; I had a legitimate reason to worry. In Portland back in the 1990s, a black guy tried (and failed) to break into my car, and when the police came, he lied and told them I’d called him a nigger. Luckily, there were witnesses to corroborate that I hadn’t dropped any N-bombs. But whites currently live under a cultural regime where any kind of self-defense against a black person opens them up to hate-crime accusations. I was faced with such a dilemma one dark night in Brooklyn a few years back when a sketchy black dude walked alongside of me for nearly a mile and wouldn’t say why — while I was worried about being murdered, I was equally concerned about how it might look if I were to defend myself.

So in the current scheme of things, there was nothing protecting me from winding up in the news for being mauled by pit bulls because they got scared when I called a little black girl a nigger. That’s just how the cookie crumbles these days.

It was hard to feel angry at the little black girl, because she’s not responsible for the fact that her dad is a slovenly, child-endangering lunatic. But if I had to rank whose lives mattered most in that situation, it’d be: 1) mine; 2) Junior’s; 3) the black girl’s; 4) the three ghetto pit bulls.

I would have fought to protect Junior, but if those dogs started gnawing at my throat, I’d have to defend myself. And if somehow the pit bulls had killed both the little black girl and Junior in the emergent fracas, I would have felt bad about the black girl but utterly furious about losing Junior. The black girl may be the same species as me, but Junior is a family member.

The entire situation raised the topic of why many people, myself included, respect most other animals more than I respect my own species. And I say “other animals” because I think a primary human delusion is the ditzy notion that we aren’t animals. We are, in many ways, the basest of all animals. People who rank human beings above other animals on some arbitrary moral hierarchy tend to hold human nature in much higher esteem than I do.

I’ve always found animal torture much harder to stomach than the idea of adult humans being tortured because I assume that every last human is guilty of something and at least deserves the punishment on some level.

Sure, animals aren’t capable of doing calculus or writing software scripts or developing vaccines against rabies. But neither are they capable of hypocrisy or guile or self-righteousness, which is why I’ll always consider them to be fundamentally more ethical creatures than the mutant fallen pervert breed known as Homo sapiens.

Apparently, I’m not alone in this sentiment. A recent poll found that overwhelming majorities of all generational cohorts “say they love their pet more than at least one family member.”

The typical reasons offered for this, at least among pet-lovers, is that animals love you unconditionally, no matter how badly you smell or how ugly you are or how repulsive your personality is or how much you hate yourself.

Ehh, try not feeding them for a week and see how unconditionally they love you.

A 2013 study by psychologists at Georgia Regents University polled 573 participants as to whether they’d save an animal or a person if they found both standing in the path of an oncoming bus. Two out of five respondents said they’d save their own pet and let a foreign tourist get creamed by the bus. But when given the choice between saving a generic dog and a generic human, a majority opted to save the human. If given the choice between sparing a close family member and letting an unfamiliar dog get killed by the bus, they’d save grandma every time.

A 2017 study by sociologists at Northeastern University set out to determine whether humans actually feel more empathy toward animals than toward creatures of their own ilk:

In this study, the participants were asked to respond to a fake news story about a victim who was assaulted with a baseball bat, leaving him or her unconscious with several broken limbs. While the story was the same, it differed in one crucial detail: the identity of the victim, which was either a one-year-old baby, an adult human, a six-year-old dog, or a puppy.

Respondents were most disturbed at the idea that a human infant was the crime victim — only a little bit more upset than they were when the victim was a puppy. Pulling in at third in the Empathy Sweepstakes, but still not far behind the infant and the puppy, was the adult dog. Coming in at a “distant” fourth was the adult human.

Researchers concluded that adult humans were the only group not considered entirely helpless and vulnerable. But the fact that infant humans got the most empathy led them to conclude that empathy was based on a victim’s perceived helplessness. And whereas a needy baby, puppy, or dog evoked feelings of compassion, very few people want to be around a needy adult human for very long.

I feel that study confirmed my prejudices: It’s much less unsettling to conceive of a human being getting clubbed with a baseball bat, because at that point in their lives, whether by design or neglect, there’s the nagging sense that they had it coming.

Most adult women are not only needy as hell, they are also guilty as sin. Because of this, in times of danger we need to amend our hoary old cultural tradition of “women and children first” so that the default policy becomes “animals and children first.”

Okay, all animals except those three pit bulls. I always thought they were assholes.