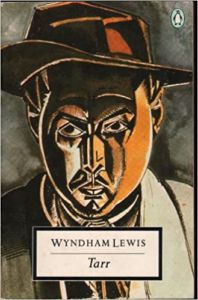 Finally getting to Kerry Bolton’s Artist of the Right was an honest realization of how little I knew of the history of dissident, Right-wing art and literature. One of the artists I was most intrigued by was Wyndham Lewis, and particularly his first novel, Tarr. Though it was originally published in 1918 and later revised in 1928, what makes this piece of literature as timeless and as relevant as ever is its inclusion of not only a place – Paris –, but an entire ideology and way of life as a main character in the story.

The eponymous protagonist is a young English painter living in the City of Light a few years prior to the outbreak of the Great War. He is loosely engaged to a middle-class German woman named Bertha Lunken, but quickly finds himself enmeshed in a complex shifting of relationships with two interlopers: another German — also a painter — named Otto Kreisler, and an American-raised Russian called Anastasya Vasek. Tarr considers himself a pure artist, but seems to be embroiled in discussions on the matter more than he actually paints. He laments his attraction to Bertha, who he considers a “bourgeois bohemian” — something Paris was teeming with at the time of writing. This is the fifth character mentioned above: the faux arts movement and all of its associated charlatans. Tarr detests this almost as much as his fatal attraction to it in the form of Bertha, and it is in part one of the primary catalysts of his fascination with Kreisler and Miss Vasek. The German painter — an artist lacking in talent — is clearly an outsider, and Tarr sees him almost as a sort of wrench thrown in the machine of the milieu he bemoans. Anastasya, on the other hand, is an intellectual equal to Tarr, and he is mesmerized by her beauty, wit, and authenticity.

From a present-day perspective, the novel is not without its faults. For example, Louis-Ferdinand Céline’s Journey to the End of the Night — which takes place and was written in the same era as Tarr and translated from French — is a surprisingly easier read. In my opinion, the same goes for most Balzac novels, which were written decades earlier. The 2010 Oxford World’s Classics edition of Lewis’ Tarr (the 1928 version of the novel), however, requires 40 pages of explanatory notes in addition to a four-page glossary of foreign words and phrases just to know what he’s talking about. Depending on your knowledge of a century-old way of thinking, the 2010 edition also has a somewhat required introductory essay to correctly prepare the reader’s mind for the story. The essay’s author, Scott Klein, attributes the need for all the notes and indexes to the “international” style in which the novel was written, and this is not without merit.

This brings us back to the concept of a place and its associated ideology as a character. Pre-war Paris is highly reminiscent of today’s Left-leaning globohomo culture that is prevalent in every urban center throughout the West, and increasingly across the entire world. One minor example of this in the narrative is Tarr poking fun at Bertha’s plaster bust of Beethoven, prominently displayed in her apartment; the way it’s described is the modern-day equivalent of a sorority bimbo wearing a Black Flag T-shirt, or maybe brandishing a tattoo of Joy Division’s Unknown Pleasures artwork on her wrist. Aside from her cliche knick-knacks, Bertha and all the other primary characters represent an even larger symptom of bourgeois bohemianism: foreigners flooding a Western capital of culture. It’s almost hysterical to realize that none of the main characters are actually French, the same way that most writers in New York or actors in Los Angeles are from elsewhere. Artists do migrate for pragmatic reasons — whether it be publishing houses in New York, film studios in Los Angeles, or painting schools in Paris — but it is the conditions that arise around this that Tarr holds in contempt. Furthermore, it’s usually unnecessary. Written 50 years after Tarr, Tom Wolfe hit the nail on the head in The Painted Word when he stated, “Believe me, you can get all the tubes of Winsor & Newton paint you want in Cincinnati, but the artists keep migrating to New York all the same.”[1]

Lewis had much personal experience to draw from when describing this environment. An early associate of the Bloomsbury Group — a coterie of artists living in London –, he quickly came to despise the stifling conformity and group-think associated with their so-called unconventional, artistic existence. Writing on Lewis’ life, Bolton expertly describes the Bloomsbury Group as “parlor pink liberals,” and says they had the ability to “make or break an aspiring artist or writer,”[2] oddly resembling the dominance which modern liberal culturati have over the arts industry. Lewis quickly broke with this clique and founded his own art movement, which eventually morphed into Vorticism. In the original 1918 version of Tarr, Lewis pens a thinly-veiled critique of the Bloomsbury Group and wannabe artists in general when he writes:

You are systematizing and vulgarizing the individual: you are the advance-copy of communism, a false millennial middle-class communism . . . You should be in uniform and at work, not uniformly out of uniform . . . The only justification of your slovenly appearance it is true is that it is perfectly emblematic.[3]

What makes writing like this so exciting is the embarrassing truth of it. As stated earlier, the current equivalent of a lack of any Frenchmen in a novel set in Paris coupled with the stifling conformity of in-vogue ideas — always prevalent, as Tarr shows — is the same thing on steroids today. One only has to think of the sheer number of Midwesterners in Brooklyn or pushy Asians stampeding through the Louvre to implicitly understand Tarr’s woes — who is also, ironically, an expatriate. Though this may deduct some points from his authenticity score, Lewis, through Tarr, does the opposite of what most famous expatriate writers have done concerning life abroad: Whether it’s Henry Miller, Ernest Hemingway, or any other Lost Generation literati, they all — to one degree or another — romanticize the chic life of the creative individual holed up in some European capital city. Even when they delve into the grit of the impoverished artist’s life, it only reinforces the supposed authenticity of it all. Instead of lionizing, Tarr subtly lambasts. Klein echoes this when he says, “Where other once-shocking novels of the Modernist period have become domesticated by the universities and comfortably assimilated by contemporary taste, Tarr still snarls . . .”[4] This doesn’t mean that the protagonist doesn’t have his faults. As already mentioned, Tarr, by the very nature of being an Englishmen abroad, is by default part of what he despises. His game-playing with Bertha and Kreisler gets to the point of absurdity, and the average layman might roll his eyes rather quickly at Tarr’s near-constant artspeak.

This leads to another major theme of the novel: authenticity. Early in the story, Tarr conversationally spars with colleagues on the impasse created by women in the life of a true artist. He sees his fiancé, Bertha, as an obstacle to achieving authentic painting. The novel takes place in what may be one of several summits of authenticity as opposed to sincerity (in Lionel Trilling’s Sincerity and Authenticity, sincerity is described as a public virtue, while authenticity is broadly defined as being true to oneself).[5] In “Masks Off: The Politics of Sincerity and Authenticity,” author Charlie Riggs describes the path to authenticity as “deep, dark, and isolating.”[6] It sounds just like the dedicated artist, hovering over his work through late hours in a cramped attic studio; something Tarr desperately wants to achieve for himself. Klein again accurately portrays the novel — and Tarr’s — paradox: “No one, including the critic of inauthenticity in society and art, can step outside the analytic gaze: the avant-gardist looks directly into the mirror when he condemns the world around him.”[7]

It is worth noting the comforting nature of sanctioned thought and ways of life while simultaneously getting to feel unique and authentic. I somewhat embarrassingly admit to enjoying most of the clichés associated with the modern liberal hipster: going to museums, taking liberal arts courses, and maybe even hanging out in a coffee shop. The idea of the flâneur,[8] sauntering around a cityscape, wandering in and out of cafés and engaging in discourse with like-minded individuals, or — at a minimum — intellectual equals, is enticing to anyone prone to thought over action. But if you’ve been to college, wandered into a museum, or overheard a coffeeshop conversation in the past several decades, you already know that they’re filled with prefabricated ideas and decadent bullshit. Again, Tarr shows us that this is certainly nothing new.

Another reason Tarr might not have the current draw of other Modernist novels is because of its treatment of ethnicity. It won’t be a shock to anyone reading Counter-Currents, but Tarr explicitly examines the polarity between different groups of people. Though all the novel’s separate groups hanging around Paris adhere to a transnational cosmopolitanism, lo and behold, the Germans still look and act differently than the Russians or Poles, who are even more different than Tarr and his fellow Englishmen. It should be noted that Lewis began work on his first novel before the war, but his role as an officer in the Royal Artillery on the Western Front against the Germans does not seem to have negatively impacted his treatment of them in his writing. If anything, the eventual post-war impoverishment and disillusionment of the German people appears to be codified in the character of Kreisler; Lewis himself later speculated that Kreisler may have been a bizarre prediction of Hitler’s rise to power.

Although the above-mentioned drawbacks of the novel’s age and style — the adjectives of “hulking,” “massive,” “weight,” and “bulk” frequently used to describe beautiful women made me wince — can at times be annoying, Tarr is absolutely worth reading for anyone interested in a deeper dive into Right-wing art and literature. Lewis is an embodiment of everything Bolton writes about in Artists of the Right; he’s a true writer, painter, and thinker. Later in life, Lewis did repudiate some of his political stances, but his work — Tarr in particular — still stands as something unique, especially compared to the uniformity of his time, as well as ours.

[5] Trilling traces a civilizational drift away from sincerity, starting in the post-Enlightenment era, toward individual-oriented authenticity, so common in the twentieth century. The twenty-first century — the age of unlimited virtue-signaling — seems to have reversed this course.

[8] Flâneur: A modern male of urban affluence strolling around a city. Though Tarr uses the term boulevardier instead, the novel must have rubbed off on me . . . I couldn’t resist the urge to use a foreign word.

» The Counter-Currents 2022 Fundraiser
The Bowden Buzz