What Good is a Town Square if You Live on Different Planets? 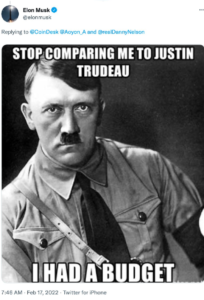 When renegade weed-smoking transhumanist wannabe Martian Elon Musk announced his $46.5-billion takeover of Twitter on Monday, he said, “Free speech is the bedrock of a functioning democracy, and Twitter is the digital town square where matters vital to the future of humanity are debated.”

Musk had also compared the site to a “town square” a month ago on Twitter, when he asked his 85 million+ followers: “Given that Twitter serves as the de facto public town square, failing to adhere to free speech principles fundamentally undermines democracy. What should be done?”

Democracy seems like a nice concept. We’re told that it depends on a fully informed public. But it also depends on a public that’s able to be informed. It rests on the shaky assumption that most of the public isn’t superstitious and overemotional. Most importantly, democracy demands that you have only one public square and, by implication, only one “public,” one tribe, one nation, one demos. If you have more than one, you don’t have a democracy, you have a looming civil war.

Free speech also seems like a nice concept. To make it work, though, everyone needs to be speaking the same language.

Just like democracy and free speech, debating also seems like a nice concept. But I heard someone opine a few years ago that debates should only be arranged between people who share the same goals, and the debate should only involve choosing the best strategy for achieving those goals. This is why most online “debates” devolve into a poo-flinging contest rather than an honest exchange of ideas — because the two combatants can’t even agree on what’s best for the world. They might as well be different species.

When I first heard of Musk’s swaggering takeover of Twitter, I will confess to a brief squirt of springtime optimism. For all of the site’s flaws, it is still the only website on the planet that I know of where you can follow any breaking news story as it happens up to the second from multiple sources. As is inevitable, some of the breaking news is false and some of it is true, but as more and more information flows in, a clearer picture of truth starts to emerge — that is, if the site isn’t actively burying some sources and promoting others.

But that’s what Twitter has been doing for years, and many suspect it’s because Donald Trump’s presence on the site was a yuge factor, if not the yugest, in his 2016 election to the presidency. Before Trump was elected, the site had already begun banning “dissident” voices it found objectionable such as Chuck Johnson, Milo Yiannopoulos, Jared Taylor, and Andrew Anglin, who had all garnered media attention but were hardly considered anywhere near the mainstream.

But only four years after his election, Twitter banned Trump himself for allegedly promoting terrorism on January 6. Only last month, it banned Tucker Carlson — the most-watched personality on cable news — for accurately referring to Assistant Secretary of Health Dr. Rachel Levine as a man.

Twitter went from banning “extremists” to banning a sitting President and the country’s most popular cable news host. That’s because sometime after Trump’s election, there ceased to be an American mainstream. The center collapsed. There were only two sides, both of them extreme, and both of them convinced that the other side represented the extremists.

But almost immediately after Musk’s takeover of Twitter was announced, Carlson’s account was back up, as were many other accounts that had been banned under the previous regime.

In late 2020, Twitter locked the New York Post’s account for correctly reporting about Hunter Biden’s laptop, which many see as a blatant attempt to steer the 2020 election in Joe Biden’s favor. The same year it suspended the account of Li-Meng Yan, a Chinese virologist who alleged that COVID-19 was manufactured in a Wuhan biolab. Twitter had ceased even pretending that it was an open forum for debate and instead took on the role of a debater who decided he’d already won and had paid off the security guards to forbid his opponent from even entering the debating hall.

Elon Musk has promised to change all that. Just like democracy and free speech and robust debating, it sounds like a nice idea. I’m wondering if it’s too late, though.

In an April 11 article for The Atlantic titled “WHY THE PAST 10 YEARS OF AMERICAN LIFE HAVE BEEN UNIQUELY STUPID,” Jonathan Haidt writes:

The story of Babel is the best metaphor I have found for what happened to America in the 2010s, and for the fractured country we now inhabit. Something went terribly wrong, very suddenly. We are disoriented, unable to speak the same language or recognize the same truth. We are cut off from one another and from the past.

Haidt cites the 2014 book The Revolt of the Public by former CIA analyst Martin Gurri, who’d noted that before the Internet, the American public perceived itself as a single “mass audience” who were all looking at the same society through a single mirror. In an interview with Vox, Gurri said:

The digital revolution has shattered that mirror, and now the public inhabits those broken pieces of glass. So the public isn’t one thing; it’s highly fragmented, and it’s basically mutually hostile. It’s mostly people yelling at each other and living in bubbles of one sort or another.

Ironically, the Internet — which was supposed to bring the whole world together on one stage — is precisely what made such a thing impossible. No, Rodney King, we can’t all get along. Things such as Twitter proved exactly how much we can’t get along. We can’t get along at all.

I understand the enthusiasm for Musk’s ballsy buyout of Twitter. But when I hear people insist that once everyone is allowed again to tweet whatever they want so long as it’s not a violent threat, we will finally have an honest, robust exchange of ideas, the libs will be owned, they will admit it, we will all hug, everyone will come to their senses, order will be restored, democracy will thrive again, people will be judged on their ability and character rather than their ideology, everything that went wrong in America the past half-century will be reversed, peace will reign once more throughout the valley, and clog dancers will once more perform at the town square this Oktoberfest, I appreciate their optimism but pity their naïveté.