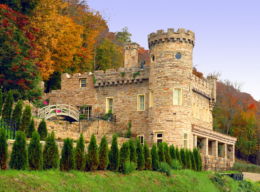 After ten conference cancellations with hotels, VDARE finally hosted their first, UnCancelled conference on April 23. Instead of using the pop-up conference model, where none of the attendees knows the venue until hours before the event, VDARE took a no-nonsense attitude. They put their foot down and bought their own venue — not just any venue, but an honest-to-God 137-year-old stone castle in the small, conservative town of Berkeley Springs, West Virginia.

Perched in the hillside over the state park, the castle is its primary landmark. Despite some minor Internet brouhaha after its purchase in 2020, the town has been very friendly to VDARE and its owners, Peter and Lydia Brimelow. If there were protesters this last weekend, nobody knew about them. VDARE wisely bought not only the castle grounds but also the three houses next to it, the 40 acres behind it, and the land across the highway.

It was rumored that there was an International Day at the state park far below the castle. Theoretically, this was a protest against the conference, but Lydia Brimelow was relaxed about it: “I have no problem with that. That sounds like something I’d take my kids to.” My own husband dropped by Saturday afternoon, and indeed, the “protest” was two ladies in a gazebo wielding sidewalk chalk. This “protest” was said to have been organized by a coffee house that has been screeching about VDARE on Boomerbook for two years. According to the locals, it’s been struggling since it began bringing in drag performers. As it turns out, there’s no existing market for drag shows in West Virginia.

The nationalist community, however, is thriving. Conference attendees and volunteers from the area had recently participated in the Berkeley Springs’ cleanup days and tree planting. During the generous lunch and dinner breaks, guests were pulling up real-estate apps on their phones and discussing business opportunities.

It was a boutique conference with about 40 guests, all of whom were successful or influential in one way or another. While the conference was livestreamed to reach a wider audience, keeping the number of in-person attendees low allowed us to have meaningful conversations with each other and hatch plans that otherwise would have required a separate, private dinner.

The talks began on Saturday after a generous continental breakfast. We were celebrating two anniversaries: the ten-year anniversary of John Derbyshire’s “The Talk, Nonblack Version,” and the 30-year anniversary of Peter Brimelow’s National Review cover story, “Time to Rethink Immigration.”

“The Talk, Nonblack Version” was the reason John Derbyshire was fired from National Review and has been with VDARE ever since. It was also one of my first experiences with race realism. I was riding the bus in Seattle when my husband texted me the link. TakiMag’s pink title lettering is disarming, but still, I hoped no one was looking over my shoulder. By the end of it, however, I remember thinking, “This is totally sensible. I don’t disagree with any of this.” From there, it was ¡Adios, America!, The Bell Curve, and The White Nationalist Manifesto.

The other presentations yielded some excellent gems:

The Democrats have become the party of constant screeching. — Washington Watcher II

There are some facts about race I don’t like . . . If we’re not ready to deal with facts that make us uncomfortable, then we’re not really growing up. — James Kirkpatrick

James Fulford, managing editor of VDARE, has an incredible talent for tackling even the most serious subjects in an amusing way. Describing his aptly-titled concept of Immigrant Mass Murder, he explained,

It’s not our racism. It’s their racism. They moved here. They felt isolated. They started shooting. It’s the Chechen American dream . . . That’s not the preferable way of doing The American Dream.

The evening culminated in a debate: “We Are Doomed.” In honor of John Derbyshire’s book, We Are Doomed, participants either argued the affirmative, “Yes, we are doomed,” or negative, “No, we are not doomed.”

For the affirmative, James Kirkpatrick and of course John Derbyshire, who explained he had actually wanted to title the book We Are Doomed, Doomed but that his publisher protested this was “too many dooms.” James Fulford and Peter Brimelow argued the negative.

Each of the presenters had the opportunity to provide a statement, and then they were asked a series of questions by the audience in panel style. I would have liked to see a back and forth among the participants, but we had a schedule to keep, and I was glad to see the audience jump up to the mic.

Afterwards, the audience was polled. The room came down 15-11 on the affirmative, “We are doomed.” It seemed the younger participants leaned toward the “doomed” conclusion, but this isn’t necessarily a bad thing. They understand what it’s like to be a minority already, and are more inclined toward a revolutionary mindset. They are more likely to understand what James Kirkpatrick had said in his speech: “When your leaders tell you that you need to behave like a conquered nation (like Germany), you are a conquered nation . . . Our founders rejected their orders.”

But I still wondered, what exactly is doomed? The fifty United States of America? The Historic American Nation, otherwise known as the white demographic majority? The immigration restrictionist movement?

I do not believe the immigration restrictionist movement is doomed — but if an immigration moratorium is passed, whites will still be a minority. Whites in the next generation are already a minority. Thus, there are only two ways to halt the dispossession of American whites: for majority-white cities, counties, and states to secede, or the United States as a whole must rethink the citizenship question and consider repatriation.

I suppose if we fail in either of those, we could become a persecuted but fierce diaspora. But I’m not sure we as a race have this temperament in our genes.

Peter Brimelow entertained the idea: “We are doomed. But we persevere, nonetheless . . . You never know what’s going on in the enemy camp.”

The next morning, we were thrilled to see that the elusive Paul Kersey was our surprise guest! He actually changed his entire presentation to assert that no, we are not doomed.

Attendees were in for another bonus: The special, first-ever address from VDARE’s video producer, Noah Arnold. Known for his work behind the lens, the audience was pumped as he told us, “Entertainment is propaganda. We need to create our own.” Even better, we can do it on a shoestring budget. As Paul Kersey reiterated in his own talk, CNN+, CNN’s short-lived streaming service, had a $300 million investment and 500 employees, but they had to close up shop after 23 days because they only had 10,000 subscribers. VDARE has one videographer and 46,900 followers on Twitter. Not a bad ratio. Clearly, Arnold is tilting the propaganda war in favor of truth.

I thought back to James Fulford’s optimistic attitude concerning our future, which was one of the highlights of the conference:

Perhaps there are other things we can do to un-doom ourselves.

Even if we don’t, James Kirkpatrick said something I will never forget:

While I think America, and the West, is doomed, I think we in this room are not doomed. And on that note, I am more optimistic, more enthusiastic than ever. Because every single person who enters this movement now knows this isn’t a game, knows they’re going to have to pay costs, and they’re willing to go through with it ‘til the end.

VDARE and their conference-goers know the stakes. Putting on this kind of all-inclusive conference is extremely expensive, and renovating a historic property even more so. (You can donate here.) The castle is not just an event venue; it is a statement of permanence.

On Sunday we brought items to be placed in a time capsule which will be opened in 2087 on Virginia Dare’s 500th birthday.

Someone asked me, “Do you think they’ll still own this in 2087?” I’m sure of it. Like the Historic American Nation itself, they’re not going anywhere.