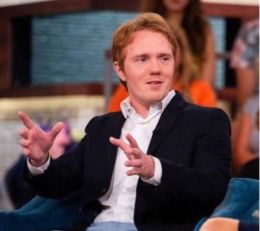 Derek Black, a rare example of a former White Nationalist who “unlearned” his views.

A common sentiment one encounters among Leftists is that their opponents have a moral obligation to “unlearn” their views (see this post). Leftists from conservative backgrounds insist that they changed their minds because they “thought for themselves,” and order all Right-wingers to do the same — or else.

The claim that they “thought for themselves” is easily disproven. Truly thinking for oneself is difficult. Shedding old beliefs in the pursuit of truth is an arduous, even painful process, like summiting a mountain. Anyone who has embarked on this path would realize that beliefs cannot simply be discarded overnight and that ordering someone to “unlearn” his views and providing no further direction is far from helpful.

In most cases, people who reject the value system instilled in them by their upbringing did not arrive at their views through reason. They were simply initiated into a peer group/subculture whose ideology they absorbed, or they consciously decided to rebel against their parents. Swapping one ideology for another via peer pressure or rebellion is relatively easy. It’s akin to memorizing a formula instead of actually deriving it oneself and understanding why it works. This explains why Leftists scoff at those who struggle to leave old beliefs behind and proclaim that “it’s not rocket science.”

If you genuinely wanted people to think for themselves, then you would not order them to arrive at a particular position. You would not shame them (“there is no excuse”) into falling in line with your ideology. You would simply urge them to question everything and come to their own conclusions

Finally, if you really cared about timeless truths, you would be indifferent to social fads and would not invoke the Current Year as an argument. Many Leftists from conservative backgrounds are upwardly-mobile strivers afflicted with status anxiety who prize their social standing over truth. This also explains their eagerness to intimidate conservatives: It is an attempt to distinguish themselves from classmates and relatives who never left their hometown. One sees similar behaviors among affluent urban white people who are anxious about retaining their status.

Leftists are resistant to the idea that they did not arrive at their views through reason because it threatens their unspoken belief that they are innately morally and intellectually superior to lesser white people. They are quite confident that they would have been the “good guys” in the Civil War-era South or National Socialist Germany, despite the fact that only a tiny fraction of people actively resisted those regimes at home. It is rather ironic because their conviction that they are somehow better is not exactly an egalitarian sentiment.

Derek Black, the son of Don Black of Stormfront, is a good example of someone whose political transformation was a product of peer influence. He was raised a White Nationalist and was active in the movement from a young age. Upon going to college, he was suddenly surrounded by Leftists. When his political activities were exposed, a Jewish friend started inviting him to Shabbat dinners and held him by the hand as he coaxed him out of White Nationalism. Black soon did a 180 and is now an anti-racist activist.

Unlike most Leftists, Black actually seems self-aware and credits his friends with converting him. In one TV appearance (which I cannot locate now), he mused that perhaps his parents would cease to be White Nationalists if they had different friends. Regardless of whether this is true, it reveals a lot about his own psychology.

Other “former racist” stories are similar. Jeff Schoep abandoned his worldview after befriending a nice Jewish woman and a black guy who fixed his car. I can’t think of a single case of someone who disavowed White Nationalism on intellectual grounds.

To anyone who has spent lots of time thinking about politics and philosophy and forming a worldview, cases like these are nothing short of baffling. But it is not surprising when one takes into account humans’ powerful desire for belonging, community, and social status. If all of the above are contingent upon their espousing certain views, they will unconsciously conform and brainwash themselves into adopting such views — unless they have a quasi-autistic immunity to social pressure or are naturally dominant, high-status males.

Leftists’ general assumption is that White Nationalists cannot possibly have arrived at their views through reason. They were instead infected by the “virulent” mind-virus of racism. Even if they grew up in liberal or anti-racist households, White Nationalists somehow magically absorbed the racism that supposedly pervades our culture. In reality, loners and “spergs,” who have a heightened immunity to peer pressure and are driven by a desire to know the truth, are overrepresented in the movement.

This brings me to my next point. Even loners and spergs are products of their biology and environment. I evolved beyond my conservative, religious upbringing and rejected much of it, but it influenced my political trajectory. The reason why formerly conservative Leftists strayed further from their upbringing than I and many other White Nationalists is not that they are smarter or more independently-minded, but that they were subjected to peer influences and social pressures to which we, being loners, were not. So to the accusation that I have not fully outgrown my past, I would simply reply, “Yes.” There is, after all, nothing wrong with adhering to traditional values instilled in you by your family.

Furthermore, political affiliation, like all psychological traits, is heritable. Up to 60% of variance in political ideology can be explained by genetics. Racial loyalty and ethnocentrism have a biological basis. No one can ever fully emancipate oneself from his biology.

It takes intellectual humility to acknowledge the limitations of one’s own reasoning. I am not surprised that the post linked at the beginning of this article was shared by a page entitled Science & Atheism, since atheists are not known for their humility, despite proudly referring to themselves as “skeptics.”

If the vast majority of people will never be able to independently and organically experience a radical shift in their worldviews, then telling them to do so amounts to telling them to find a new peer group. The irony, of course, is that Leftists ostracize their political opponents, preventing them from achieving this, so they end up mostly recruiting upwardly-mobile striver types who were determined to ingratiate themselves into their circles, anyway. Derek Black’s Jewish friend was shrewd enough to realize that inviting Black to his home would be more likely to effect a change in his worldview than punching him in the face, but most Leftists don’t share his approach. (Ostracizing and shaming your opponents only brings them to your side when it is paired with a more inviting approach. They must be given space to retreat.)

What do Leftists really want? They certainly do not want you to “think for yourself.” Most of them do not even necessarily want you to experience a change of heart, otherwise they would actively engage with their opponents and foster a culture of debate. Even apologizing profusely is not enough. They will never really forgive you, and apologizing actually heightens their contempt for you. One can only conclude that all they really want is to bully their opponents and remove them from public life.

Whenever mainstream Leftists style themselves as independent thinkers and urge their opponents to “think for themselves” or “read a book,” they must be mocked and exposed as the conformist bullies that they are.

« The Birth of Post-War American Conservatism in Detroit