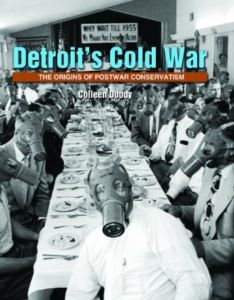 In 1945, with the exception of the United States, Canada, and a few other places, the civilized world was in ruins. While the industrial centers of the United States were not burned-out husks pocked with bomb craters, the economy was not well-functioning. There was inflation and a shortage of consumer goods. Due to these grinding problems, the Republicans won the House and Senate in the 1946 mid-term elections. It was the first time the GOP had won any major victories since the 1929 stock market crash.

There was not much of a conservative ideology at that time, however. The Republican Party’s platform was just an echo of the Democrats’. The general consensus at the center of the American political spectrum was to support FDR’s New Deal, most especially government control of industry through war production boards and price/wage controls.

Colleen Doody [2] of De Paul University has written a book that argues that today’s conservativism — the ideology of Barry Goldwater and Ronald Reagan — starts in the local political struggles of Detroit, Michigan in the years just after the Second World War.

The Reaction to Big Labor

It was a reaction to the excesses of the big labor unions which started to crystalize into what would become Goldwater/Reagan conservativism. At the end of the war, Detroit was a boomtown and the fourth largest American city. The city had drawn laborers from all over the United States and its unions were well-organized and powerful.

The extraordinary growth of unions had occurred due to the encouragement of a wartime US government agency called the National War Labor Board (NWLB). The NWLB pressured employers to allow unions to organize in their factories and made union membership mandatory for all employers. In exchange, the unions agreed not to strike for as long as hostilities were ongoing.

When the hostilities ended, Detroit led the nation in strikes:

Work stoppages became so common that the Detroit News ran a Strike Box Score, modeled after a baseball box score [3]. In it, the paper listed which companies experienced strikes, how many employees were affected, when the strike began, and when or if it had ended. (p. 25)

While strikes and work stoppages can be effective at creating social change or better working conditions, they have the drawback of inconveniencing a large proportion of the public who have no stake in it.

There was also Communist influence within some of the unions. The United Public Workers of America, a union made up mostly of sub-Saharans who worked for national, state, and county governments in some capacity, was led by Communists. The Congress of Industrial Organizations (CIO) was also heavy Communist-influenced. During the early days of the war, before the Soviet-German Non-Aggression Pact fell apart, CIO-affiliated unions went on strike to deliberately harm production for the war effort on Moscow’s orders.

Michigan’s 1946 election hinged upon the politics of unions, their strikes, and Communist influence. It led to the election of Kim Sigler [4], an anti-Communist, as Michigan’s governor and the reelection of the anti-union/anti-Communist Edward Jeffries [5] as Detroit’s mayor.

The Migration of the Sub-Saharans

Another ongoing event was what historians have come to call the “Great Migration” of sub-Saharans to the cities of the northern United States. The main victims of this migration were the people and city of Detroit.

The book shows that many of the “civil rights” battles and their outcomes fully took shape in the Detroit of the 1940s, and were replicated nationwide in the aftermath of the Johnson administration’s disastrous social reforms that led to the 1964 Civil Rights Act.

Whites reacted to sub-Saharan activism by moving to the suburbs. Sub-Saharans protested police “brutality” even when the crime statistics were the same as today’s. In the early 1960s,

Detroit’s white population had fallen by 360,000 while the black population grew by 180,000. Many whites felt under threat by the burgeoning black community and its demands for equality. One response to this seeming peril came from the city’s newspapers, which increased their reporting on crime and race. The Detroit News, for example, wrote that “blacks constituted 26 percent of the city’s population, [but] they were responsible for almost 65 percent of serious crime.” (p. 67)

White resistance had metapolitcal backing by Floyd McGriff [8], a newspaper publisher who spread the ideas of the then budding conservative movement. McGriff argued that programs like public housing projects for sub-Saharans lowered the property values of white homeowners and that all “civil rights” demands amounted to an economic attack. At the same time, sub-Saharan activists employed a variety of methods to achieve their goals. Communist groups in Detroit tried to organize sub-Saharan activism, but other Negro activists distanced themselves from the Communists and pushed their narrative of oppression through the mainstream media outlets headquartered in New York.

“Civil rights” ended in Detroit in the same way as in any other place: The whites gave up critical territory, leading to long commutes and disruption, and put a stop to official segregation efforts through various legal subterfuges, such as setting up suburbs, while all the areas conquered by sub-Saharans fell to rack and ruin.

The most interesting element in Detroit’s conservative revolution was the swerve of Roman Catholics in Michigan away from supporting Big Labor and of being (somewhat) anti-capitalist in outlook and into becoming fervent anti-Communists. It started when an anonymous Roman Catholic housewife organized a campaign with her neighbors to pray the rosary for Russia’s conversion. This show of Catholic identity didn’t alienate Protestants in any way; instead the two branches of Western Christianity allied along an anti-Communist, anti-secularist axis.

The story of Roman Catholic anti-Communism is the story of ethnic assimilation to Yankee norms. After the states of Connecticut and Massachusetts disestablished their official religions of Congregationalism and Unitarianism, Northerners didn’t stop attending church; they created a vast new array of religious denominations. As a result, Roman Catholicism ceased being an alien religion linked to the Spanish Armada and became simply one of many spiritual options. Church attendance also increased. Only half of recent ethnic Catholic immigrants attended mass at the time, but third-generation Catholics attended church at rates upwards of 80%. Today’s Roman Catholics in the northern US can unironically call themselves Yankees with a Puritanical mindset.

Another reason for the fusion of ethnic Catholics with Yankee Protestants was the fact that many of the ethnic Catholics were Polish. Poles were present in the Jamestown Colony, and Wilmot Robertson [9] called Poles an assimilated minority [10]. Furthermore, many anti-Communist Protestants such as Gerald L. K. Smith [11] had their metapolitcal ideas translated into Polish. This is besides the fact that the Soviet Union’s policy of ethnically cleansing Poles enraged Michigan’s Polish community.

Detroit’s business elite also put forward their own ideas. They supported the theories presented in Frederick A. Hayek’s book, The Road to Serfdom [12] (1944). They were also able to split Big Labor’s hold on their members by pointing out that nearly half of them were affiliated with the Republicans. The union leaders were typically Democrats. This split led to much frustration, and that frustration eventually led to the Right to Work laws. This meant that workers were no longer required to join a union.

Ronald Reagan was elected by promoting ideas that had been developed in Detroit’s local political scene in the years just after the war. His administration ended many of the 1940s’ most pressing problems. Unfortunately, however, his revolution didn’t address newer problems such as mass deindustrialization [13], which had been but a cloud the size of a man’s hand in 1951. Deindustrialization [14] is mentioned in this book, which also points out that the Korean War was the tipping point when manufacturing jobs started to leave America’s heartland foundry.

This book demonstrates that that Ronald Reagan’s bold domestic moves, such as firing all the striking air traffic controllers in 1981, was only accomplished after decades of grassroots political organizing and support, as well as long-running metapolitcal efforts. There isn’t an easy way for today’s Rightists to address our current problems merely with a Hail Mary pass, such as the Trump administration. We must organize, persuade, and develop metapolitical content every day until a great many minds are changed.