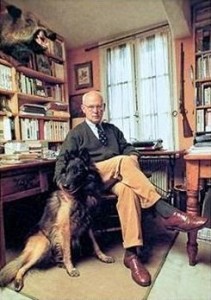 La Nouvelle Librairie has begun publishing Les Carnets Rebelles (The Rebel’s Notebooks) by Dominique Venner [2]. The first volume, which was published at the end of 2021 and is an anthology of observations and autobiographical anecdotes, reveals the passions and lucidity of this unique historian. The editorial staff offers its readers an extract, probably dating from the beginning of the 1990s, in which Dominique Venner underlines the real issue of the fall of Communism in the East: “This emerging movement, which has no name yet, repudiates liberalism as well as socialism. It is a return to the sources of the peoples.” This is a reflection that sheds light, 30 years later, on certain tendencies of the Fidesz in Hungary and the PiS (Law and Justice Party) in Poland. Dominique Venner’s ultimate wish was to found the Iliade Institute [3]. — Ferenc Almássy

The great movement that exploded in Eastern Europe (including the Soviet empire) in the 1990s (but which became visible beginning in 1989) is not, as Western socialists pretend to believe, an aspiration for a sort of social democracy as a substitute for Communism. It is a fundamental movement, a national-conservative revolution in a way, which is not analogous to what is happening in the Third World (or former Third World). “Gorbachevism,” far from leading the way, tries to control and influence this movement to maintain the power of the Communist oligarchy under a liberalized (and therefore social-democratic) appearance.

But the popular uprising that is developing means something else that is also not a “victory for liberalism,” as others wish. It is a movement that combines the rejection of the socialist lie, the fundamental claim of national identity, the awakening of cultures, religious sentiment. It is not a religious feeling that has withdrawn into the individual sphere as it is in the West, but the expression of an identity through community, ethnicity, and nationality: all things against which the Enlightenment and its sister ideologies that were its heirs, French or Anglo-Saxon bourgeois rationalism and Marxist socialism, had risen. Powerful yearnings for freedom are not “liberal” yearnings, which are fundamentally individualistic, economic, and identity-denying.

This emerging movement, which has no name yet, repudiates liberalism as well as socialism. It is a return to the sources of the peoples.

Gorbachevism finds allies in the Western intelligentsia. It is characteristic — satirical, even — that the French and Western leaders publicly wanted an armed Soviet intervention in Romania during Ceausescu’s collapse (which had been programmed by the KGB) in the last days of 1989, then approved another intervention at the beginning of 1990 in Azerbaijan. The Western intelligentsia is tinkering with the concepts of a new social democracy, a label now claimed in the East: in Poland, Hungary, or in East Germany by all those Communist parties that are pretending to scuttle themselves in order to better maintain themselves. But the peoples of Eastern Europe will not let themselves be fooled.

The only voices that come from the West, those of the intelligentsia, are therefore only reinforcing this tyranny of lies that has enslaved populations since 1945. It is not from the West that aid will come to the great libertarian and national uprising, but from this uprising itself, and it is he who will perhaps help the West to free itself from its own lies and its own servitude.

The only voices that should be “allowed” in the West today are not those who in the past waited (and worked) for the success of Communism (with a human or inhuman face; these are artifices), but those who always fiercely fought Communism.

The only institution that appeared to be truly moribund at the start of the 1990s was not the KGB, but the European Economic Community [precursor of today’s European Union], a masterpiece of social-democratic and capitalist technocracy.

[8]If you are already behind the paywall and want to share the benefits, Counter-Currents also offers paywall gift subscriptions. We need just five things from you: