Ukraine: What Exactly is Hungary Being Reproached For? 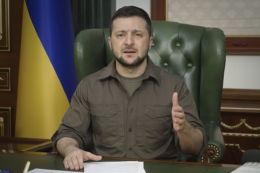 “There can be no Russian networks in Europe that split the EU from within, those that are trying to help Russia make as much money as possible even now. Everyone knows very well who in the European Union opposes humanity and common sense, and who does nothing at all to help establish peace in Ukraine. This must stop, and Europe must stop listening to any excuses from officials in Budapest,” Ukrainian President Zelensky said in a videoconference with the Danish parliament on 29 March.

Since the beginning of the conflict between Russia and Ukraine, Hungary has been singled out for its refusal to accept Ukraine’s demands, especially by the Ukrainian authorities, who are spending a lot of energy telling European countries what to do and issuing moral judgements after having armed civilians and refused serious negotiations with Russia for some time.

Zelensky speaks of humanity and common sense while demanding that Hungary give up Russian gas, which is a nice example of the pot calling the kettle black. At a time when the comedian from Kyiv is playing the sanctimonious commander and geopolitics seems to be rising from its ashes while becoming more democratic (allowing for an escape from the Covid narrative, which will no doubt only be temporary), let us recall a few basic elements of common sense and geopolitics:

It should be easy for everyone to follow up to this point, right?

But let us continue.

On the Ukrainian side of the border, there are some 100-150,000 ethnic Hungarians. Hungarians have been living there for more than 11 centuries, as that region only became part of Ukraine under Stalin’s rule. Arms shipments across this region could drag it into the conflict. It has been spared until now, but the Russians have warned they will strike Western arms convoys once they reach Ukrainian soil.

This gas is used for heating (60% of Hungarians heat their homes with gas), and also by the industrial sector.

During his three consecutive terms in office since 2010, he has also been the Hungarian leader who has done the most to diversify the country’s energy sources since the end of Communism, notably by engaging the country in the Three Seas Initiative (linking Croatian and Polish liquefied natural gas [LNG] terminals) and by negotiating assiduously with Serbia, Turkey, and Azerbaijan for the purchase and transport of gas from the South Caucasus.

Is this clearer now?

Hungary is also 65% dependent on Russian oil and uranium.

But let us go even further.

The gas shortage that will strike Europe will, in the best-case scenario, send gas prices through the roof. In the worst-case scenario, people will be unable to heat their homes, and some industries will have to be shut down.

This means that Europe is entering a major crisis against which no national political measure can fully protect its citizens in the long term, due to the European markets’ economic and energy interdependence.

What the measures taken against the Covid pandemic began, the sanctions against Russia are continuing wonderfully as well: the price rises in energy, fuel, food, construction materials, and electronics are only just beginning.

But even this is not enough for the United States and Ukraine, who are ready to fight to the last European, respectively for its strategic interests and for the survival of its regime. The Europeans follow them, driven by fear and emotion, and unaware of such a choice’s consequences . . . It is pure madness.

“I know that eliminating Russian gas will have costs for Europe,” President Biden said, rubbing his hands together at the prospect of selling us three times as much overpriced American LNG. “But it’s not only the right thing to do from a moral standpoint, it’s going to put us on a much stronger strategic footing,” he explained. Forget about the moral justification, which is absolutely obscene coming from the leader of the nation that has invaded more countries than any other over the last 100 years, as well as the country of Little Boy and Fat Man, of Guantánamo, of the Patriot Act, of wiretapping and economic warfare against its own allies, and on and on. Biden is right, however, about the strategic dimension of the present situation. Europe is submitting completely to Washington’s will, and the United States is seeing its position being strengthened there after having gradually disengaged from Europe to focus on the Pacific. This is a golden opportunity for the United States, which understands it as follows: it is taking Europe back into its fold and subjugating it even further by imposing US LNG on the Old Continent, thus winning not only new and juicy market shares but also considerable leverage for influence.

So, little Hungary, which has known many misfortunes over the last hundred years – two lost world wars in which it was embroiled against its will, a Bolshevik revolution, German and Soviet occupations, the carving up of its historical territory in an unbalanced and unjust treaty, enormous destruction and the displacement of its population, the revolt and repression of 1956, – does not need any lessons while trying to find a way to survive in a storm. It especially does not need such lessons from Ukraine, a captive state and a Jacobin country that cares nothing for its indigenous Hungarian minority, and whose MP, Serhiy Melnychuk, threatened Hungary in 2019 by saying that the Ukrainian army could invade the country in two hours.

And yet, per capita Hungary is the country that has welcomed the largest number of Ukrainian refugees, giving them help, support, care, and accommodation without hesitation, neither on the part of the authorities or the population.

And there is no grievance or problem being held against these Ukrainian refugees that Hungary is proud to help.

So, if defending our interests is something that anyone still cares about, and if anyone still assigns some importance to the notion of national sovereignty, then it is high time to put reason back into the heart of politics and to get rid of emotionalism, which has always been a tool of manipulation.

Yes, Russia has declared war on Ukraine and invaded it. Soldiers and civilians are dying, and refugees are losing everything and fleeing their country. It is a genuine human drama called war. It is only a conventional war so far, thank God. It is a crisis, just like so many in the history of mankind. And in crises, it is imperative to keep a cool head. Any overreaction, any hysteria, any decision determined by intense and circumstantial emotions is a mistake. Even worse, it is a fault in a political leader, whose first and foremost mission is to preserve his or her country’s interests. Out of a sense of esprit de corps and in the hope that this could be used to pressure Russia into bringing peace faster, Hungary has agreed to the sanctions package, even though doing so is against its own direct interests considering that these sanctions are hitting Hungary harder than Russia . . . As for the grotesque accusations of Hungary being “pro-Russian” or of being a Russian pawn, they are not worth wasting one’s time with; they are just a rehash of the Western “woke” conspiracy theory that sees Russian agents everywhere as soon as one does not march in the gay pride parades or when one does business with Russia. These same people have no problem with those countries where slavery still exists, where homosexuals are thrown off rooftops and women are stoned to death for suspected adultery, where social credit is the norm, where peaceful demonstrators have their eyes gouged out by the police, where Christians are killed only for their faith, where Covid “contact cases” are forcibly interned and deprived of their constitutional rights, and so on. They are hypocrites.

Finally, here is a secondary, yet practical question: Ukraine produces two-thirds of its own gas, but as for the rest, Hungary is its second-largest supplier, just after Poland. Shall our gas tap be turned off, too? After all, it is mainly Russian gas . . .