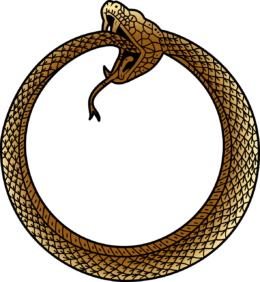 It was said by sages of old that matter is an illusion — not because it “isn’t real,” whatever that means, but rather because it is always in motion and always changing. Therefore, as soon as one perceives and understands its state it has already changed, and the idea one has about it is no longer true. At best, one perceives what it was, but never what it is.

It was also said that matter is not as it appears; that is to say, that it deceives, as for example when one sees a mirage in the desert. Now, Plato tells us expressly that the Soul precedes the body, and even the most abject materialists say that the brain commands the body, which is why if one begins lifting weights, before the body adds muscle, it adds the nerves that supply those muscles, for why build what it cannot move? The Soul is a Mind, so that the Mind moves the body of material things.

If philosophy is the method by which the Western man attains an understanding of Truth, then art is how it is propagated to the common man, since philosophy is a subject for a very few of the most divine rank. The most common sort of intellectual — I mean the true intellectual, not the philosemitic automatons who inhabit the centers of “learning” called universities — is the artist, for the artist frames the mystic truths in a manner that motivates and inspires the common man. Art, not “science,” develops and propagates the moral frameworks that permeate a society and determine its direction.

Thus, we see in the last cycle that the artistic revolution that was the Renaissance preceded the Scientific Revolution, and likewise that the decay in the arts which could already be seen in some places in the nineteenth century, but which culminated in the postmodernism of the twentieth century, preceded the real collapse in scientific progress, or at least its technological branch. This is so because the idea that any progress in the understanding of the way things are or of the structure of nature can ever be made through material methods is a dubious assertion under any circumstances.

There’s been much talk for some time of the idea of the Great Replacement as the substitution of European man with Third World alternatives in his own countries, but in reality, the most important replacement has already occurred: the replacement of Western man’s mind, which was formerly built upon his great heritage and the sublime truths of his most profound thinkers, with a corrupt understanding promulgated by alien elements that crept in like parasites and poisoned him. These alien elements first salted the earth that was his mind, and later the soil of his political institutions, academies, businesses, public life, family, even his very body via the unnatural foods with which he came to feed himself — in short, his entire physical and social environment. 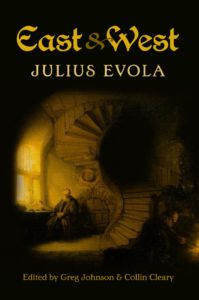 What’s needed, then, is a Great Replacement — not in the Typhonian fashion of spiraling downwards into some Tartarean abyss of cosmic horror, but rather a replacement of that which is evil with beauty, and of evil with good, as the old Egyptian tale of Ra cutting the serpent Apep to pieces every night and then rising again to light the world with Virtue and Truth. And here is a great mystery: Wherever there is light, there is inequality. If we look outside in the daytime, we see trees, grass, birds, and squirrels, and also buildings, cars, and people. One thing is not necessarily “better” than others, though certainly some are, but each is different and distinguishable, having its proper place and function. But in true and absolute darkness, where Apep dwells, nothing can be distinguished by sight from anything else: All is equal in the impenetrable black abyss.

The first opportunity to replace darkness with light that is within every man’s grasp is with the darkness in his own soul. If a light is kindled there, even though it is only a candle, it can shine outwards to others, and perhaps even set what it touches on fire until all the monsters of the modern world perish together in a great conflagration of cleansing fire.

But that would be Chaos! Indeed, Hesiod tells us that all things in the beginning sprung from Chaos, both gods and men, beings of supreme order and goodness. But should we fail, Ovid offers some comfort:

If sea and land do go to wreck and heaven itself do burn,
To old confusèd Chaos then, of force we must return.

And where does Ovid tell us this but in the Metamorphoses, nothing more or less than a book of changes and transformations! We’re told in the myths that one of the labors of Hercules was the cleaning of the Augean stables, which had soiled all the land with dung because of the great multitude of cattle Augeas kept there. The mind of modern man is very much like a dirty stable and the men themselves not so different from cattle — that is, unable to clean up their own mess. Thus, for those men who remain less than entirely domesticated, let them first clean their own minds, and then the rest of the world afterwards.

But to clean is to remove sources of pollution, and this means all those things that deceive and demoralize; that is, every written word by every enemy with no exceptions. There has not, is not, and never shall be any salvation from outside, be it material, intellectual, and most of all spiritual. The mind will fill itself with something, regardless, and so it’s not enough for the sources of pollution to be removed. New sources of contemplation, derived from things beautiful and true, must replace that which is cast out into the mire in order to remoralize ourselves in a way tending toward Order. Beauty and Truth are virtuous; hence, they cultivate Virtue, and the only two things in the history of Western man that can cultivate Virtue in his mind are philosophy and art, for it is through these that he beholds beauty and comprehends Truth.

Let the new artist paint, sculpt, write, stage plays, and build again those sources of beauty to inspire and embolden the common man, for what is more beautiful than courage, which Plato said was the very same thing as Virtue itself? This so the common man might become a great man, thus replacing the ugly, decadent, and degenerate type that currently peoples his realm. No great warriors will spontaneously arise from the soil of cowardice, but they’ll grow once they’ve cultivated courage in their minds.

Nevertheless, not all will be great, but the inferior — the merely mediocre, the herd — shall follow the path the great men set once the old order is overthrown, like shadows mimicking the genuine agents of movement and change: the great men. The masses don’t matter; the great men matter, and he is a great man who has the courage to do what is right under difficult circumstances and at the risk of great loss.

Let the philosopher likewise dare to think new things and not suppose that such insights can only happen in the light of day, when reason shines at her brightest and empire wears glory like a cloak. For, as Thomas Taylor says in The Restoration of the Platonic Theology, the sublime theology of Plato rose “to its pristine perfection during the decline of the Roman Empire,” when the great minds of Plotinus and Proclus, Porphyry and Iamblichus attained to an understanding and exposition of the divine truths unequalled by any man before or since. This happened against the backdrop of the moral and material decline not only of the Empire, but of the religion itself.

And here Hesiod helps us again, for he tells us in the Theogony that from Night came Day and Space. We see this in the yearly pattern of the Sun, in the solstices and equinoxes, where the period of darkness germinates at the time of the greatest light (the summer solstice), when weak men begin the process of making hard times. The light is reborn in the season of greatest darkness (the winter solstice), when hard times begin the process of making strong men. There is no end to history because there is no end to time — only the circle of seasons, some greater and some smaller.

Speaking of Apep again, no matter how many times Ra cut him to bits, he returned whole the following night. Everyone who lives now was born in the winter of Western civilization, and we are sailing, like Ra, through a long night. But as surely as Ra rises again every morning, so shall the brilliant light of Order and Truth rise again, and in place of ruins we’ll have cities, civilizations, and a summer season — though perhaps we ourselves will not live to see it.

In retrospect, it was as futile to try to resist the first Great Replacement as it is to hold back the passage from day to night. The night is already upon us; let us kindle a new light. Already we see the Typhonian regime’s power crumbling everywhere, a manifest embodiment of stupidity and disease. The flame is already kindled, and it is as useless for them to try to stop the real Right, which is nothing other than Virtue, as it is to try to stop the rising of the Sun at daybreak. Once the transformation of Western man’s mind is complete, he will overthrow his enemies as surely as the Voortrekkers routed the Zulu at the Battle of Blood River. The time is now.