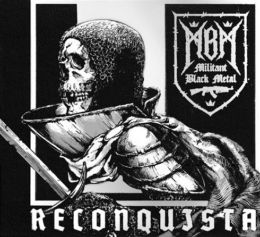 Today I would like to introduce the very popular fourth full-length album from the band M8l8th, Reconquista. The band itself has gone through three phases in their development, even though they have always played — and still play — true National Socialist Black Metal (NSBM). The first phase ran from 2003 to 2014, when the singer was arrested for racially-motivated assault (he claims it was self-defense) and subsequently convicted. While in prison, he wrote a large amount of new material for M8l8th and later used it on the album Unbreakable Faith. 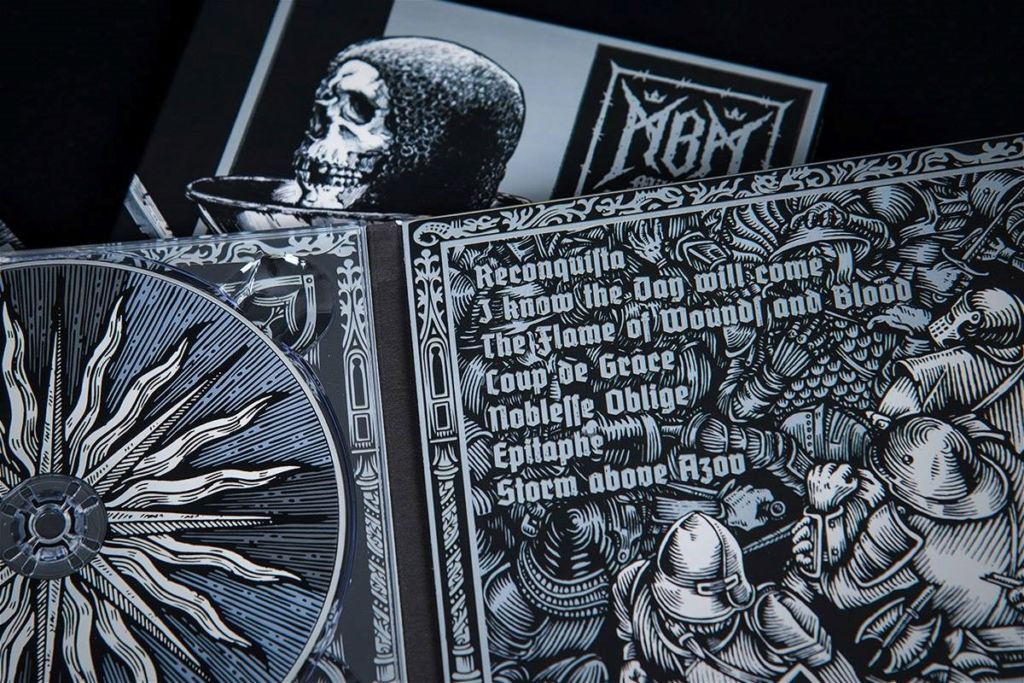 The band went through a second phase from 2015 to 2018, when it moved to revolutionary Kyiv, joined the civilian organization of the National Corps of the Azov Battalion, and resumed hosting Asgardsrei concerts, but at a much higher level than it had done in Russia. Other projects soon grew up around the band in Kyiv: a clothing brand, portal, concert organizer Militant Zone, as well as managing their shop, Militant Store. Additionally, there was the activist group Wotanjugend, the Russian Center (an association for helping refugees from Russia), the Reconquista project (an information portal), and the Plomin literary club. The band is also involved in the organization and management of the Cossacks House, in this respect being strongly inspired by CasaPound Italia. (At present none of these projects are operating, but that is something for a separate article and is not the subject of this review.)

The band announced the third phase at the beginning of 2019, when they held the world’s biggest NSBM festival, played their best show, and started recording two new albums. This phase continues to this day.

The album itself is introduced by the song of the same name: “Reconqiusta.” This song works as an intro, as it was used in the Asgardsrei 2017 video that is introduced by this song, and there is also a short interview with M8l8th singer Alexey Thuleseeker. Other interviews with bands are conducted similarly: a member always speaks while a song from the band that played at the concert plays in the background.

The album’s second song, “I Know the Day Will Come,” is the only previously unreleased track on the album and deals with the classic theme that one day, the reversal will come. The song’s title and content have been used before by various figures in the NSBM scene. The singer himself has commented on it: “The song used is dedicated to the apocalyptic description of the coming Ragnarök, because it doesn’t matter how many heroes gather in Valhalla, for there will never be enough when the wolf breaks his chain.” The lyrics were written in 2008, when Alexey was in prison awaiting his release.

I know the day will come from centuries past, I see the storm is coming,
Ragnarok bringing Ragnarok,
The faith of the Ancestors-Ases, in the memory of the living,
and the Destruction of the Race, waiting under the ice . . .

The third song, “The Flame of Wounds and Blood,” is a cover of the eponymous one from Nezhegol and M8l8th’s split album Wotanjugend and has a clearer sound and a few musical improvements compared to the earlier version.

The other three songs come from a collaborative project, an EP by the singer of French Peste Noire (Kommando Peste Noire, or K.P.N.) and Russian M8l8th. The EP is called Coup de Grace. The name may already be familiar to some readers from Michael Moynihan’s early project of the same name, but make no mistake, Moynihan’s experimental neofolk has nothing to do with this one. The title comes from the French singer K.P.N. Famine, and means “stroke of grace” or “blow of mercy” — or as M8l8th translates it, Udar Miloserdiya. The phrase itself refers to the mysterious figure of the outsider, brawler, and fierce knight, Bertran de Born, of whom Dante Allighieri said, Arma poetasse – “He sang of wars.” I will discuss the figure of Bertran de Born himself later.

On the album, the singer from K.P.N. stepped back from his grotesque musical compositions and experimentation and embraced the harsh musical expression of ‘80s Black Metal, which is confirmed on the cover of the LP version of Coup de Grace. The EP’s design refers to metal posters from the early ‘80’s or is “inspired” by the poster of the 1975 film Rollerball. Incidentally, the poster of the Asgardsrei 2018 festival organized by the band M8l8th in Kyiv also turned to a retro expression of that era.

These three songs are quite atypical for both bands, because M8l8th added sound and retreated from their usual themes: the Second World War, National Socialism, German poetry, and the Teutonic spirit, as we can hear on their previous full-length album, The Black March Saga (2013). This album deals with the initial phase of Operation Barbarossa, up to the crushing and depressing defeat of the German army. This is how the band works with their sound on the album — or, as already mentioned, they openly present it in their side-project, A-cult. 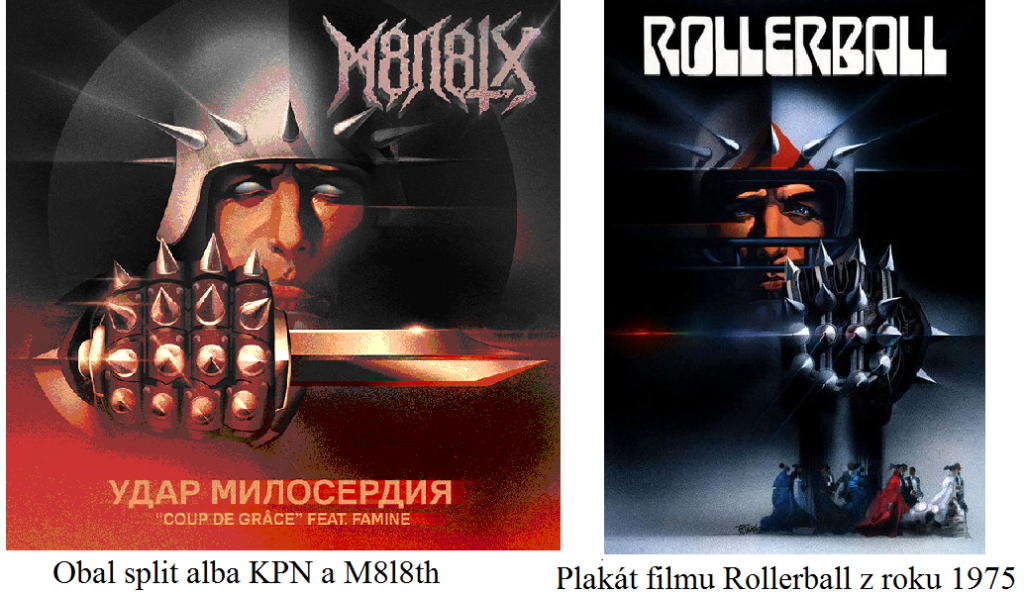 Left: Cover of split album by M8l8th and K.P.N. Right: Poster for the 1975 film Rollerball.

The last track of the album Storm Above Azov is a remake of the single, Storm Over Azov, but is sung in a much more cheerful way. There is great joy in aggression and violence. For 2016’s Storm Over Azov itself, the cover artwork was a reworking of the artwork Lawrence Sterne Stevens created for Jessie Kurish’s book Undying Monster. 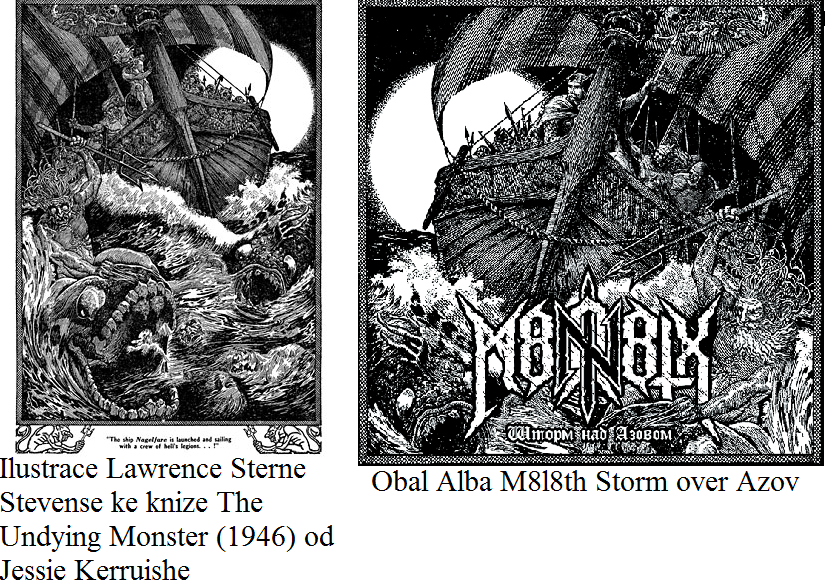 De Born grew up in the castle Hautefort (Occitan: Autafòrt), in French Aquitaine. There were three medieval worlds — French, English and Spanish –, and each of these created a specific cultural mix. In his youth, he expelled his brother from the castle, which was not unusual at the time.

He first distinguished himself by composing troubadour poetry, which was popular at the time, before moving on to his own idiosyncratic poetic form of expression. He composed, for example, a poem that in a way certainly resonates with Famine, the singer of Peste Noire, given Famine’s fondness for all things medieval, rustic, quaint, and French, as he himself describes in his interview with Nathan T. Birk in Zero Tolerance magazine. The poem is in the style of the troubadour poetry Fin’amor; i.e., a celebration of perfect disembodied love:

I cannot hide from thee how much I fear
The whispers breathed by flatterers in thine ear
Against my faith: — but turn not, oh! I pray,
That heart so true, so faithful, so sincere,
So humble and so frank, to me so dear,
O lady turn it not from me away!

If Bertran de Born had composed only Fin’amor poetry and sung his inaccessible Bel-Senhor, he would have been only one of many French troubadours, but he became known above all for his sirventes; i.e., mocking, grotesque, topical verse. He was also its pioneer.

What may be mainly of interest, however, is that Bertran had a more violent nature and was a warrior at heart, his true passions being only poetry and war, in which he found the meaning of his existence and the fulfilment of the ideal of chivalry. In his eyes this merged with the ideal of the warrior, as his verses also prove:

For no man is held to be worthy
until he has taken and given many blows.
Maces and swords, colourful helms,
shields riven and cast aside:
these shall we see at the start of the battle,
and also many vassals struck down,
the horses of the dead and wounded running wild.
And when he enters the combat,
let every man of good lineage
think of nothing but splitting heads and hacking arms;
for it is better to die than to live in defeat.

His motto in life was:
Barons! your castles in safety place,
Your cities and villages too,
Before ye haste to the battle scene . . .
That peace already too long hath been!

Which is directly in line with the song “Noblesse Oblige.” Bertran disliked the nouveau riche, loaning at interest, Jews, townspeople, merchants, usurers, tavernkeepers, back-bending serfs, merchant morality, and a world without a fight. To him, war was a simple, pure thing, and in a sense, the truth. He valued sacrifice, military honor, commitment to one’s lord, elitism, higher behavior, and gallantry.

Bertran had a somewhat contradictory relationship with Christianity. He supported the Reconquista; his ideal in this respect was the solar Christus Invictus, the victorious Christ the Warrior, and he had no sympathy for church squabbles and moralizing. Christian fervor, words about God, faith and saints are not to be found in his poems. He was a very Nietzschean figure in his time, and his will to live and vitalism certainly characterize his efforts.

It is therefore somewhat paradoxical that he spent the last years of his life in a Cistercian abbey. He chose it because he was interested in monks who were educated, militant, and politically committed — but Dante Alighieri nevertheless gave him a place in Hell in The Divine Comedy.

Black Metal is a very broad genre, and within it we can find everything from strongly philosophical and religious bands, such as Deathspell Omega or Dissection, to a large number of parody bands, such as Czech Umbrtka, Averzus, or the band Black Satans. Thus, in Black Metal as a radical genre, we can find a lot of bands that are radical, satanic, and misanthropic — and not only in their statements. Even I will admit that it looks silly, at the very least, if a band sings about killing, genocide, and mass murderer, and then in interviews the members talk about being tame flower children, vegans, anti-racists, and post-feminist hipsters.

The path chosen by M8l8th goes completely the other way. Not only does the band have their undeniable musical qualities (although I personally think they are a bit stagnant musically at the moment), but they are also not afraid of transgression in the real world. For M8l8th, Black Metal embodies an elitist musical rebellion against a secular and materialistic worldview. One can sense a genuine desire for war in M8l8th.

The point of openly NSBM projects, as I see it, is that if these projects are allowed to play, the more moderate patriotic or ethnic pagan bands will also not be persecuted, and a clear delineation of what NSBM still is and what it no longer is will be made. These bands make sense in order to expand the boundaries of freedom. The important thing is that they make their music well, are interesting, and most importantly, they authentic. After all, no one said that Black Metal is supposed to be wimpy music about tolerance, and that it’s supposed to promote politically-correct views and cowardice.

» Counter-Currents Radio Podcast No. 423 The Best Month Ever on The Writers’ Bloc with Mark Gullick