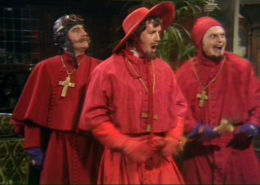 Monty Python co-founder John Cleese endured a bit of a career hiccup a few days ago at the South by Southwest festival in Austin, Texas — but this hiccup is indicative of bigger things. While riffing with other comedians during an event called “John Cleese in Conversation,” [2] Cleese hit upon a topic which pretty much caused everyone there to cringe: slavery.

Once the taboo subject was broached, Cleese went from joking to serious when he opined that 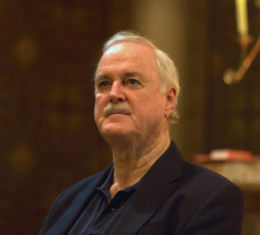 This was, apparently, a faux pas which everyone in the room except for Cleese recognized. After some of the comedians tried to steer the conversation to safer grounds, Cleese carried on, explaining that people “get competitive about being oppressed.” After claiming that the English had been oppressed by the Romans for 400 years, he started talking reparations:

I want reparations from Italy. And then the Normans came over in 1066 . . . they were horrible people from France and they colonized us for 30 years, and we need reparations there too, I’m afraid.

Now, clearly at this point he was joking. But according to the Hollywood Reporter, the audience wasn’t so sure. Cleese started out making sense, and in the end, it wasn’t clear whom or what he was making fun of. Some in the audience were laughing and clapping, others were groaning, and most, it seemed, maintained a confused, uneasy silence. In fact, things got so uncomfortable that black co-panelist Dulcé Sloan temporarily confiscated Cleese’s microphone. It seems this was more an effort to prevent Cleese from further embarrassing himself than it was overt censorship. But who knows? If anything, this tiny affair demonstrates how multiculturalism and multiracialism utterly kills comedy. How can you fully appreciate a joke when you’re worried that the strange-looking guy with the face tattoo and nose-ring sitting next to you might take offense?

And another thing: Whatever happened to the art of the headline? It used to be an opportunity for journalists to be wickedly clever with puns, historical references, naughty double-entendres, and the like. And with a comic legend like Cleese, whose career spans over 50 years, there are countless themes one can riff on. But instead we are treated with triteness such as “John Cleese Had Thoughts on Slavery at SXSW and It Was Super Cringey” (Hollywood Reporter), or “John Cleese Has Mic Taken Away at SXSW After Embarrassing Rant About Slavery” (Inside Hook), or “John Cleese Throws Slavery Curveball That Leaves Panel Baffled, Says Brits Deserve ‘Reparations’” (Daily Caller).

If you want something done right, better do it yourself. Besides the one heading this very article, here are some examples of how news outlets should have introduced this story (and if you can think of more, please add them in the comments):

John Cleese: Let’s Bicker and Argue about Who Enslaved Who

Supreme Executive Power Derives from the Woke Mob, Not from Some Rational Historical Discussion

The English Slave Has Passed On! It Has Ceased to be!

This is the atmosphere the Hollywood Reporter called “super cringey.” But why was it cringey? Cleese himself later claimed that the humor sprang from “the ridiculousness of the comparison” between a white Briton like himself demanding reparations for things that happened during the ancient and medieval periods and, presumably, black Americans today demanding reparations for slavery in the New World. At least that’s how I interpret this twitter exchange:

Quite right, Sajid. But that was the joke

The ridiculousness of the comparison was the joke

But if you lack a sense of irony, you might not realise
that. But that’s not a good reason to deprive people
who do understand irony of a good laugh https://t.co/zRXi4hpaHZ [4]

Am I the only one not entirely satisfied with Cleese’s explanation? It seems to me that the humor — or Cleese’s tone-deaf attempt at humor, depending whom you talk to — resides in ridiculing the very idea of reparations, not innocently comparing different forms of them. And for a white man in the entertainment industry — one who vocally identifies as English as Cleese has done, no less — this is strictly forbidden. Ridiculing anything that is a source of the Left’s power is strictly forbidden. This is one reason the audience was so confused and uncomfortable. Yes, comedy is in many ways about breaking taboos; but it’s always the other guy’s taboos being broken, not yours. When it’s yours, that’s when you cringe.

You can buy Spencer Quinn’s novel White Like You here [7].

John Cleese has developed a reputation for being a something of a soft reactionary in his old age. In 2020, he defended J. K. Rowling [8] from the woke mob when she spoke out against transgenderism. He famously tweeted in 2019 that London is no longer an English city [9]. He has also spoken out against woke culture [10], and is currently developing a comedy series called John Cleese: Cancel Me. It is therefore likely that Cleese will survive this incident. Unfortunately, however, it is unlikely he will learn from it.

Cleese accused his detractors [11] of lacking an understanding of irony or a sense of humor. But that’s not entirely the case. Instead, they find Cleese’s comments threatening because it was a case of a white person using history as a weapon to get something in the here and now — just as black people do. Regardless of Cleese’s intentions with the joke, he revealed (and mocked) the truly cynical intelligence behind calls for reparations. It can’t be about its stated purpose of righting past wrongs, or otherwise everybody would be doing it to everybody. Instead, reparations only work when they go in one direction: Left to Right, or black to white. By turning this on its head, Cleese undermined the power and validity of the push for reparations (and of black grievances in general, for that matter). With apologies to The Incredibles, if everyone has grievances, that means no one does.

And it’s true, of course, that British have been slaves throughout history — although I am pretty sure it happened more than twice. Don Jordan and Michael Walsh report in their excellent book White Cargo: The Forgotten History of Britain’s White Slaves in America that hundreds of thousands of white Christian souls were transported out of England into slavery in the New World throughout the seventeenth and eighteenth centuries. The conditions they had to endure, especially on West Indies sugar plantations, were appalling. Michael Hoffman, in his They Were White and They Were Slaves [12], cites novelist Frances Trollope (the mother of author Anthony Trollope) as estimating that over 200,000 poor white children were employed as wage slaves in coal mines and factories across England throughout the nineteenth century. Such conditions were often just as lethal as in the New World. Hoffman’s description of the bleak and dangerous lives of the child chimney sweeps in England is particularly moving.

In The Forgotten Slave Trade: The White European Slaves of Islam [13], Simon Webb not only describes the Barbary slave trade of the seventeenth and eighteenth centuries, which victimized countless people from the British Isles, but also delves much further back than that:

Slavery existed in Britain before the coming of the Romans and it certainly lingered on after they left in the fifth century AD. The Celts both traded in slaves and kept them for their own personal use, and so did the Romans. The Angles, Saxons, and Jutes who arrived after the legions were withdrawn also approved of slavery and practiced it after their arrival in England. When they in turn were displaced by Vikings, slavery continued. All the evidence suggests that slavery was a feature of British life from the earliest times until some decades after the Norman Invasion in 1066.

Webb also reminds us that when James Thompson wrote the patriotic anthem Rule, Britannia! in 1740, he included the line “Britons will never be slaves” because the British Navy had just recently defeated the Ottoman coastal raiders who had dominated British waters throughout the previous century. This line most likely struck a chord with the British because many of them either had been slaves themselves, knew people who had been abducted into slavery, or had been forced to live under the specter of slavery in the Muslim world for their entire lives.

Like most people, the English have therefore had their fair share of slavery throughout history. But to say this in some circles today has become a revolutionary act; something John Cleese has recently learned. Our Leftist elites wish to keep this history buried so they can continue with their reparation shakedowns and other anti-white initiatives. And they will punish anyone who tries to subvert this by telling the truth — even if all he’s doing is telling a joke.