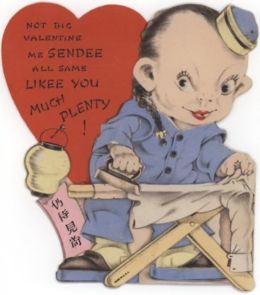 As my unbelieving and horrified eyes pored over one unacceptable greeting-card image after another, I kept screaming inside — which is why you couldn’t hear me, but trust me, I could hear myself screaming as clear as a bell, so loudly in fact that at one point I felt compelled to scream at myself to stop screaming — and what I kept screaming was, “WHY ALL THE HATE?”

To my blinkered eyes, Valentine’s Day had always been a late-winter celebration of both romantic and erotic love, a way to keep one’s heart aflutter and one’s loins aflame when everything outside is bleak and cold and dark and dead. And alas, what nobler cause is there than love, which is truly the high-mileage motor oil that greases the engine of carnality that perpetuates the species that gives us all, deep down in our frozen wintry toes, a sense of, goddamnit, my life matters, and the only reason I’m here in the first place is because mom and dad were able to stand the sight of one another at least long enough for dad to slip it in and drop a load?

But discerning minds realize that, not only are things never what they seem to be, they are, in fact, always the opposite. This whole bullshit celebration of “love” — which is in reality merely a capitalist ruse to promote the global homosexualist agenda of soulless, atomized consumerism by forcing the rubes to plonk down billions of dollars for chocolates, flowers, steak dinners, champagne, marital aids, battery-powered devices, and performance-enhancing pharmaceuticals — is, in reality, one joyous orgy of unmitigated hate speech and violent abuse toward marginalized communities. Even the pretense of “romantic love” was slyly intended to cloak a bacchanalia of heteronormative lust, the validation of the male gaze, and the systemic affirmation of paleo-phallic supremacy and so-called “ironic” rape culture. 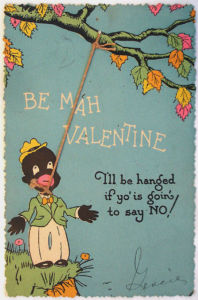 [2]WHY ALL THE HATE? I kept screaming to myself as loudly as I could pretend I was able to hear.

Over the course of your life, assuming you’re not so ugly that babies cry at the mere sight of your face, you’ve likely received a Valentine’s Day card or two. I have a hunch, though, that they never featured images that mocked the lynching of African-American men [3], nor ones that showed African natives as half-naked, drum-beating imbeciles who are so primitive that they keep their hair in place with bones rather than scrunchies [4]. Because I have faith that you’re a good person, I’ll presume you’ve never sent anyone a Valentine that depicts African natives as bloodthirsty cannibals licking their oversized lips [5] at the specter of eating a blonde-haired, fair-skinned victim. I’ll assume that you’re tasteful enough never to have bought anyone a Valentine depicting African children as hapless retardates with missing teeth [6] who can’t even pronounce basic words such as “love [7]” and “have [8].” I’m going to give you the benefit of the doubt and reckon that you’re not the type of irony-poisoned misfit who thinks it’s “cute” or “based” that so many African children are eaten by hippos [9] every year. I may be committing a fatal error by assuming you’re not the kind of racist creep who gets his kicks at the sight of a Valentine that both fat-shames and intelligence-shames [10] disadvantaged young black women.

Look, I’m not saying that Africans didn’t fumble the ball technologically. I’m merely saying that it’s highly uncool to draw cartoons about it.

You can buy Jim Goad’s The Redneck Manifesto here. [12]

Not that I’m without my faults, but I’ve never sent anyone a Valentine that conflates swastikas [13] with romantic love, much less two Valentines that equate this loftiest of human impulses with the systematic murder of exactly six million Jews [14] regardless of whether the card was printed prior to the Worst Atrocity that Ever Happened or Ever Will Happen, You Anti-Semite.

Seeing that sort of image makes a person want to throw up all over themselves, assuming their heart is in the right place.

Everyone knows that despite their generally violent nature and lack of erudition, the outright extermination of Native Americans by the white man, despite the fact that they weren’t technically exterminated and probably exist in greater numbers today than they ever did, was one of the skeeviest, creepiest, and most quantifiably evil things that Civilized Man has ever done to Savage Man. Therefore, everyone can agree that it’s not funny to produce Valentines that celebrate the rape of Injun squaws [15] by white settlers, especially ones where the sexual trauma is amplified by rendering the bow and arrow in the shape of a giant white penis [16].

Valentines — or, if you’re Japanese, “Varrentines” — are supposed to stoke the embers of love between a man and a woman, not fan the flames of hatred an entrenched global white-supremacist cabal has for those over whom it rules unfairly. Yet for decades, these prefabricated and mass-marketed expressions of affection also felt the need to depict Asian sailors as sea rapists [17] and Asian laundry owners as sexually predatory transgender demons [18].

The mendacious sort of historical revisionism that has led credulous boobs to embrace the demonstrable lie that Valentine’s Day has ever had the remotest thing to do with “love” is easily debunked when one realizes that February 14 has always been used to peddle fascism [19], domestic violence [20], gun violence [21], the stigmatization of mental illness [22], freak-shaming [23], patriarchy [24], and the rape-apologist/victim-blaming idea that some girls “like it rough [25].”

Even if you want to promote the pagan-supremacist myth that Valentine’s Day has less to do with two separate Christian martyrs named Valentine who, as luck would have it, were both killed on Valentine’s Day than it does with the ancient Roman feast of Lupercalia [26], the latter ritual involved women who thought it’d enhance their fertility to line up and be beaten by drunk men, so even if you’d like to divorce the holiday from Christianity’s implicit white-heterosexist praxis, you’re still trying to legitimize and honor a tradition that endorses the ritual subjugation of women through the sheer exercise of brute male force, which wound up sounding a lot less sinister and actually much sexier than I’d originally intended. 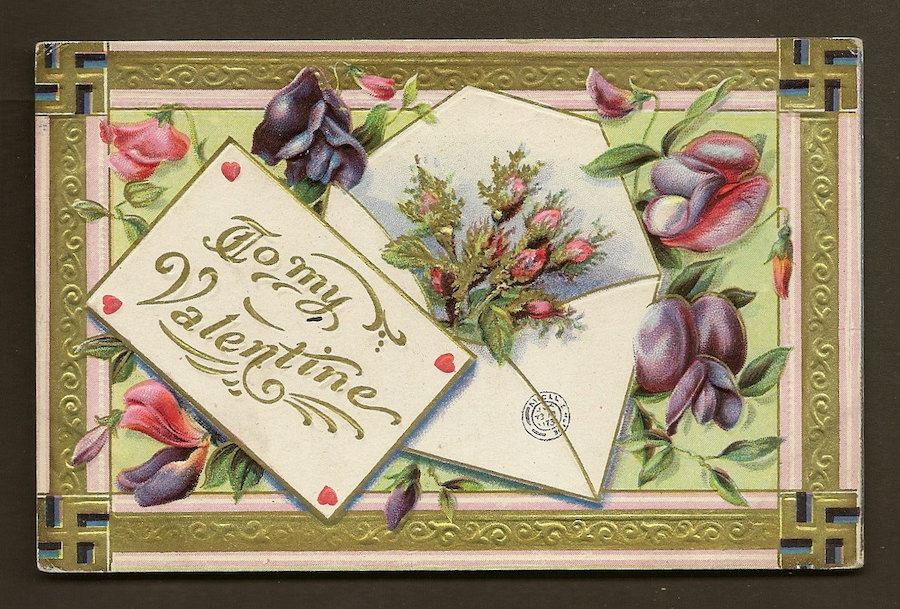 The truth of the matter is that words lead to actions. The real truth is that there’s no difference between words and actions. People are idiots, and if you give them an idea, they’re going to act on it violently. It is only in a world whose simmering hatreds had been stirred up by an undeniable history of equating Valentine’s Day with flappy-lipped pickaninnies and slit-eyed Chinamen, which had been brainwashed into conflating the tenderness of romantic love with the foulest genocidal impulses of man’s reptilian brain, where words would indeed lead to violence and murder. 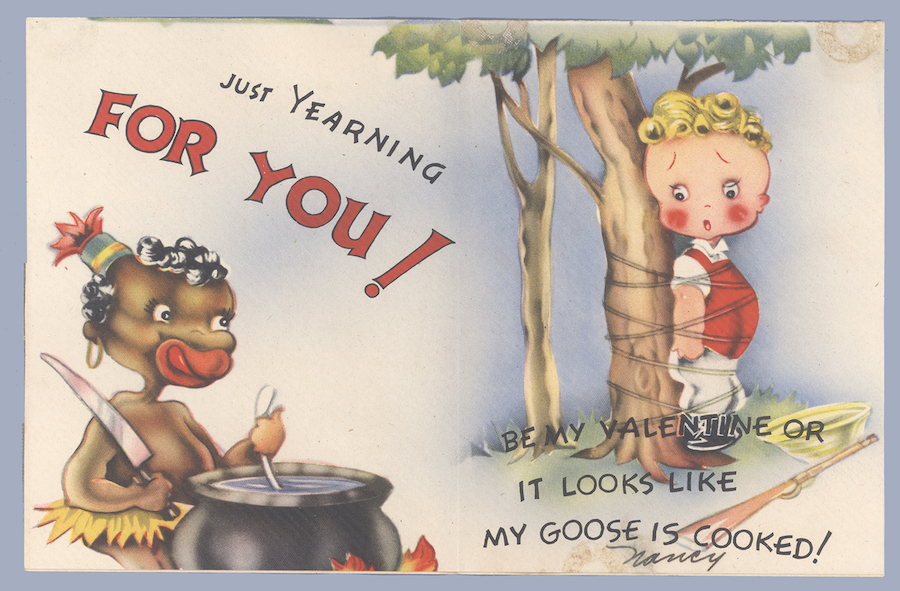 On Valentine’s Day in 2014, a black woman broke up with her “cisgender, heterosexual, white male” boyfriend, who later told her “he could not date me because I was black.” This led the writer to realize that Valentine’s Day is a viper’s nest of “racial fetishism [29].”

In 2016, due to budget cuts, a Minnesota school district eliminated [30] the “celebration” of Valentine’s Day as well as other holidays. The school superintendent, a Woman of Color, said that she received several racist letters as a result, proving my point that Valentine’s Day is a racist holiday.

In 2008, a mulatto boy named Larry King [31] — no, not the Jewish talk-show host — who’d taken to dressing in female clothes and calling himself “Latisha” was shot twice in the head by an alleged white-supremacist homophobe named Brendon McInerney after King had reportedly humiliated McInerney at school with repeated sexual come-ons. If you want to get really technical, King was shot on February 13 but died on Valentine’s Day, and although there’s really no evidence that the racist and transphobic slaying was motivated by McInerney’s love for Valentine’s Day, I’m including this story because it helps to buttress the case I’m trying to make.

On Valentine’s Day in 2017, two gay British men [32] were attacked by a trio of teens, causing one of the gayrods to lose two teeth, which was probably more emotionally painful than physically painful if you’re at all familiar with how vain gay men can be.

You don’t have to be as sharp as Cupid’s arrow to realize that Valentine’s Day is a Festival of Hate. This is why the only humane decision is to celebrate Black Love Day [33] on February 13 instead.

[34]If you are already behind the paywall and want to share the benefits, Counter-Currents also offers paywall gift subscriptions. We need just five things from you: