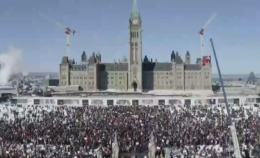 The Freedom Convoy shows no signs of capitulation. The grassroots populist revolt against Canada’s oppressive COVID rules continues to gain support and draw concessions from government officials. It’s a pretty big white pill to see ordinary white people taking matters into their own hands and effectively practice peaceful civil disobedience. It’s making waves not only in Canada, but throughout the world.

That explains why the powers-that-be in Canada are so desperate to clamp down on the peaceful protesters. The government pressured GoFundMe into deplatorming the convoy’s funds over the asinine accusation that the protest has become an “occupation.” (Compare this to GoFundMe raising money for Black Lives Matter, antifa, and other violent Left-wing groups.) Ottawa declared a state of emergency over the terrifying protesters, who are mostly hosting dance parties and honking their horns. In response, the media and politicians are rushing to condemn every minor infraction committed by the protesters — which includes a few incidents where truckers have yelled at reporters and some sightings of the Confederate flag — as abominations in the eyes of the Canadian majority.

But what may be the anti-Convoy crowd’s favorite tactic is to call the truckers racist. There have been no actual signs of racism. The protest itself ostensibly has nothing to do with race; it’s about unfair government restrictions and ordinary people wanting to live their lives without interference. This isn’t a protest against mass immigration or non-white crime — even though Canadians should definitely consider a similar demonstration against their government’s insane open borders policy. But no the Convoy is only about COVID policy.

The mere sight of ordinary whites flouting their liberal overlords’ authority draws racist accusations. There has to be something deeply sinister about all these white truckers gathering together and not following the rules, after all. The honking may even be a neo-Nazi code. (Yes, people are seriously suggesting this.)

Justin Trudeau’s regime has long sought to portray those who oppose his COVID mandates as white supremacists. “Yes, there is a small, fringe element in this country that is angry, that doesn’t believe in science, that is lashing out with racist, misogynistic attacks, but Canadians, the vast majority of Canadians, are not represented by them,” Trudeau said last September. Canada’s “anti-hate” groups have long sought to discredit lockdown critics with the racist tag, and they have only increased their efforts with the trucker convoy’s arrival.

Canadian liberals manipulated Big Tech’s algorithms to further this impression. The massively unfunny hashtag “FluTruxKlan” trended on social media to mock the truckers as modern-day Klansmen. There have even been unsubtle political cartoons depicting the trucks in white robes and brandishing tiki torches.

The system propped up its black lawmakers as the main assault force against the the anti-lockdown truckers’ “racism.” The sight of a few Confederate flags inspired one black parliamentarian to melt down before his colleagues. “The Confederate flag is a symbol for slavery,” Liberal MP Greg Fergus said in the House of Commons. “Whips deformed Black bodies, forced labor, mangled limbs, torture almost always preceded lynchings.” He then claimed that there haven’t been enough denunciations of the Confederate flag among the truckers, saying that that “scares” him. He hysterically added that some Canadians apparently think that “I am not equal nor should I be free. This is why I celebrate black history, black Canadian history, every February and throughout the year.” The House clapped uproariously in response.

He later shared them on Twitter and urged Canada to “eradicate hate”:

As a Canadian, I stand for our freedom of speech, for our right to protest peacefully and respectfully. The only way to eradicate all forms of hate in our society is to not passively stand by when it happens. 🇨🇦 pic.twitter.com/Q7Kvg3Gexj

The entire Black Parliamentary Caucus in the House of Commons later joined with Fergus in demanding government action against these racist truckers. “The ‘Freedom Convoy’ protest became an opportunity for white supremacists and others with extreme and disturbing views to parade their odious views in public,” the caucus said in a press statement.

The caucus also called for the ban of “hateful” symbols so that a black person will never have to see the Confederate flag in the Great White North again. The black lawmakers further demanded a full investigation into the trucker convoy’s funding. They argue that the money may end up going to support “domestic white supremacist terrorism.” There was no evidence given for that claim, but there’s likely none needed. These are black lawmakers talking to cucked Canuck politicians, after all; their audience won’t question their arguments.

The caucus also insisted that the police are being too nice to the truckers and claimed they would have treated them harshly if they were non-white. Any observer who witnessed how the police allowed Black Lives Matter to rampage throughout North America less than two years ago knows that’s a lie, but the truth doesn’t matter to these folks.

The convoy’s whiteness has also been upheld as proof that it’s not a “real” trucker or working-class protest. Since Sikhs now make up a large share of truckers in Canada, their relative absence from the protest makes the participating truckers appear phony. If the truckers want to come across as a more “genuine” workers’ protest, they need more Sikhs!

Unfortunately, these arguments got under the skin of the convoy and its supporters. Now its few media allies spend all their time trying to find non-white faces among the demonstrations. The few blacks or Sikhs participating are quickly turned into the face of the convoy and paraded around as proof that it’s not racist. This is a sad tradition among conservatives: Any time liberals call them racist, they desperately hunt for a minority token to shield them from this terrifying insult.

The response they should give is simply to laugh at it. There’s nothing wrong with a protest being nearly all white. As the famous slogan says, “It’s okay to be white!” There’s no need to grovel or find artificial tokens to hide your whiteness. Embrace it and make your enemies writhe in their hate. A large number of white people at an event in a white-majority country should obviously not detract from any movement’s legitimate concerns.

The overwhelming whiteness of the convoy does prove that it is an implicitly white revolt, however, even if it has nothing to do with race or demographics. These are the people who built Canada. They’re tired of their government giving away their inheritance to the entire globe and taking their freedoms. They want their country back — and it starts with ending the mandates. Over time, maybe this movement can direct its energies into challenging Canada’s demographic nightmare. Donald Trump was able to channel the Tea Party’s energy into our issues; someone could do the same in Canada.

The racist accusations against the truckers prove how powerful this smear is and how flagrantly it is being used. Being labelled a racist is almost as bad as being a registered sex offender. (In some areas, that label is likely worse than being a registered sex offender.) That’s why conservatives — who are repeatedly called racists in spite of their protestations — flail about and resort to idiotic responses to this tactic. But everything they do only further supports the power of the smear. “We’re not racists, we love people of all colors!” And so on.

To eliminate the power of this slander, you have to mock it — and perhaps even jokingly embrace it. Show the regime that their words no longer matter. In the eyes of the system, all whites are racist. It’s time to let our people know that it’s okay to be white — and therefore to be racist as well.

» Black History Bombs: A Message to the Youth