The Pleasure of Owning a Classic Car 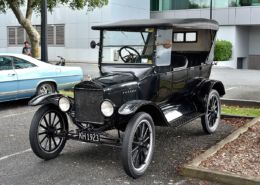 Perhaps the most classic car of all: the Model T.

By temperament and by instinct I have a need for the superfluous. — Gabriele d’Annunzio

For many of us, cars are no more than devices necessary for getting from point A to B. They can become a real burden, crushing their owners with payments while rapidly depreciating in value. And in many regions and countries, taxes, toll roads, and parking fees add to the cost of driving so substantially that it becomes almost a luxury to own a car.

A new car is a formidable enabler of freedom, of course. It allows its owner to travel anywhere, at any time, without sticking to a public transportation schedule. It is — more or less — a symbol of speed and an expression of the individual. It is a private cocoon, sometimes the last refuge where a man is left alone for any meaningful amount of time. And, nota bene, the car is intensely hated by our rulers (oh, they like theirs).

Unfortunately, they have succeeded in ruining the experience to a considerable extent. Not only are roads littered with speed limits and surveillance cameras, the car itself is being turned into a surveillance device that observes its driver, incessantly corrects his driving style, and will snitch on him at the behest of the authorities. I am not going to dispute a certain value in safety and emissions regulation; for whatever it’s worth, such regulation saves dumb drivers from the consequences of their ineptitude, and it has helped to eliminate harmful emissions to a large degree.

Sadly, this same regulation has also made modern cars fat, ugly, and boring. Today’s premium cars with their suite of “assistance systems” make any self-respecting driver slash his wrists in desperation. And that’s why almost all of them get a hard “no” from me.

The proper alternative to driving a modern car, of course, is not public transportation. It is owning a classic car — as a treat for special occasions, or even as an everyday driver. Interestingly, many regulators try to shut the use of classic cars down, but some countries recognize them as part of their cultural and industrial heritage and protect your right to own and use them.

Owning and driving a classic car is, above all, a more or less sublime statement of aesthetics. Choosing one is an intensely personal act that reflects the owner’s style and taste. Some cars are chosen because they evoke personal experiences; they turn a childhood dream into reality. Some offer a raw driving experience that no modern car can offer. And others can be appreciated for their industrial and technological significance, or simply as works of art.

A lot of classic cars are easy to drive. They will fire up without hesitation and handle everyday tasks just like they did when they were new. Some are expensive divas that require a soft touch and constant attention. Yet others, especially pre-war cars, need to be learnt and studied. For instance, a Ford Model T, a car that was ubiquitous in the first half of the last century and remained a common sight in the United States for many decades after the war, has a different pedal layout and requires a specific starting procedure. Most people wouldn’t be able to drive a Model T if their life depended on it. But it’s easy to learn.

Right-wingers tend have an elevated sense of aesthetics — and they will appreciate that half of the fun in owning a classic car is the hunt for the right one. The options are endless: Some may want to go for an all-American muscle car, perhaps adorned with a Confederate battle flag, in order to articulate one’s protest against the impositions of modern-day America. Some might go for a Lancia or Maserati in appreciation of the Futurist movement that formed such a congenial relationship with the Mussolini era. An Aston Martin, a TVR, or an MG will symbolize a masculine, specifically British style. And a Volvo 245 underscores an appreciation for a simpler life. How about a hardcore off-roader? The choices are limitless.

Be your own man

Sometimes, a classic car becomes a challenge: It can be difficult to find parts and skilled mechanics to keep it in good shape. It is simply impossible to generalize: You can run a VW-Porsche 914 on a really tight budget, while a regular service on a Porsche 959 can set the owner back by anything between $25,000 and $50,000. That said, owning a classic car might encourage the owner to perform some maintenance and repairs himself. It is rewarding and useful to learn and refine mechanical skills.

I firmly believe that almost every classic car has the potential to outlast today’s cars, which will turn into electronic garbage once carmakers stop supporting their technology. God knows who will be able to repair or replace the multifarious electronic control units — there can be more than 100 — once they sigh out their last breath one by one, or simply provide software updates and fixes for them.

Consider also that new cars lose their value at an astonishing rate. You are financially far better off buying a classic car at the nadir of its value, or when it is on the upswing. That will easily make up for any maintenance and repairs your classic car might require.

While modern cars are claimed to be “safe” (who cares?), a classic car is far better at communicating the speed driven. Their horsepower ratings may be lower, but the cars are lighter — and they sound better. Here’s another advantage: Their lack of sophisticated electronics ensures that they won’t track your location and driving style. If you need GPS navigation, here’s a life hack: Stick a USB port into the cigarette lighter and charge your cell phone instead. Waze beats any factory-installed navigation system — although the cell phone, of course, is the ultimate surveillance device. Best to stick to road maps . . .

Cars need to be rethought

Even the fastest, best-looking modern cars sold today merely simulate the future that great men once envisioned and that has been stolen from us. They are indelibly tainted by the influence of regulators and their pathetic obsession with safety, control, and environmentalism. New cars put an electronic layer between themselves and the driver; every input is second-guessed.

And the worst is yet to come, as politicians are on a mission to extinguish the combustion engine and load up every car with a plethora of the aforementioned, impossibly annoying “assistance systems.” Big Brother wants to put you into a two-and-a-half-ton RC car, remote controlled by a government-commissioned call center in Calcutta.

I recommend that instead, you find a classic car that fits you. Replace your Chevy Bolt with a ’78 Monza, swap your BMW 330e for a 633 CSi, or your Toyota RAV4 for a classic Land Cruiser. Discover their character, watch their value go up — and enjoy the freedom and pleasure that they give us, and that, one day, new cars could perhaps give us once again.

« Too Many Honkies at the Honky Tonk

» Margaret Mitchell’s Gone with the Wind