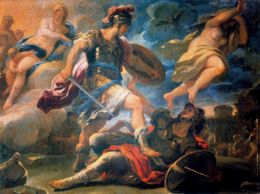 Virtus was the highest moral aspiration of Roman patriots. It had a simple meaning: Rome before oneself. Romans were judged by their service to the common good. To our own Founding Fathers, virtus was the “central element in public life.” The architects of this country were inspired chiefly by the Roman example. [2]

Since Rome was our race’s greatest political experiment, we should look there for guidance. A vigorous culture of virtus, i.e. public spiritedness animates every strong society. Virtus makes China the strongest country in the world today, [3] and virtus will fuel any European return to greatness.

Of course, virtus must be rooted in that “great physical, philosophical, and moral truth” [4] of race differences. Rome collapsed in large part due to its racial ignorance. Historians trace its decline from the overthrow of its family farm system, where slave plantations were worked by foreigners from conquered territories. The city itself had been a multicultural basket case for centuries before the Western Empire died with a whimper in 476 AD.

The endless confusion over Rome’s downfall by modern historians is yet another example of our society’s childish refusal to accept racial disparities. Like all mighty powers, what made Rome great at its inception was its people. Morality and order can be restored. Race cannot. Obviously, a return to virtus will matter today only if it is enjoined with the racial coherence Rome possessed at its finest hours.

But biology alone is not enough. We cannot compete with the idealism of the Left [5] with sterile appeals for a “meritocratic society.” [6] Nationalism is what Americans want, [7] and passionate appeals to national virtus are necessary to end replacement and repossess our territories.

Europe is genetically similar to its golden eras, but its civilization has been in humiliating decline since the Second World War. That will remain the case as long as we sleepwalk under the moral sorcery of a formidable enemy whose religion is simply racial idealism [8]. It doesn’t matter how capable a people is. In a world of competing tribes, nations without virtus will be replaced by nations that have it.

To a Roman, the object of virtus was obvious. It was devoted to the glory of their city, their empire, and their gods. But it applied more directly to the state, which secured and furthered Roman greatness.

An American’s allegiance belongs not to the regime on the Potomac, but to the white nation that regime is warring against. White Nationalists are the only people fighting for America as a white nation. Our nation’s survival depends entirely on the success or failure of our movement. Nothing else matters to us in terms of virtus as public service. There is no difference between a Roman’s duty to the Roman state and an American’s duty to white advocacy institutions.

No one else is coming to save us. We are the knight, not the princess. To a Roman, that would have been invigorating, not demoralizing.

What White Nationalists must concentrate virtus toward won’t look like the Pantheon — at least not at first. But we can build something like a state. We can build political institutions designed for attaining power. The popular demand is there. The time is now. [11]

Alexander the Great died at my age. Julius Caesar visited Alexander’s burial site at my age as well. Even though Caesar was already Rome’s greatest military leader, he lamented how little he had accomplished compared to Alexander.

I’ve done little in comparison to such men. But since I became a nationalist, I have been filled with their obsessive drive to virtus. I hope it proves contagious. Together, this community can play a decisive role in liberating white identity. But we must believe in victory before it becomes achievable.

If you haven’t contacted me yet, please do at [email protected] [12]. The purpose of getting in touch is to begin a conversation we’ll have for many years into the future. We need virtus in our movement, and it can only spring from camaraderie. Camaraderie exists only through meaningful relationships.

Join us on this journey to build a new Troy like the archetypal Roman, Aeneas. If his virtus, which was shared by every great European, radiates through the ranks of this movement, we will win.