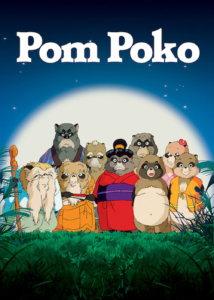 As longtime readers of this august publication will know, I’ve been haunted by the process of my ageing in this past year. During this time, I’ve thought again and again of a phrase in Cat Stevens’ “Father and Son,” spoken by the father to the son: “You’ll still be here tomorrow, but your dreams may not.”

The romantic is always prepared to die for the cause, and he is therefore always punished more harshly, to live a long life after his cause has been shattered, to live as a man among the ruins. Having recently debated the viability of our struggle to save the white race with a skeptical friend, my thoughts turn to the fate which faces those who fight for lost causes. I believe a glimpse of this fate is visible in the 1994 Studio Ghibli animated film Pom Poko.

Pom Poko is the story of Japanese raccoon dogs, or tanuki, fighting against the encroachment of housing developments on their ancestral forests. I do not believe it is possible for outsiders to Japanese culture to fully appreciate the film’s subtle references to the tanuki as a creature of folklore. Even the film’s name, pom-poko, refers to the sound that raccoon dogs make when beating their bellies as drums. Throughout the film, we’re reminded of the sheer alien notion of the raccoon dogs’ magical transformative power being especially pronounced in their testicles. Nevertheless, the commonalities of the raccoon dogs’ struggle to maintain their home and our own revolt against the modern world bind us to them and demand that we give them respect. There’s also something deeper, something gentle about the idea of mischievous forest critters protecting the woods that appeals to the white man’s aesthetic sensibilities, themselves forged in reverence for the forest. Hey, there’s a reason that uncle Adolf named the Japanese honorary Aryans.

The story begins with a tribe of raccoon dogs being driven from their lands and coming into conflict with another tribe over territory. They struggle and fight, but are interrupted by the wise grandmother Oroku, an elderly raccoon she-dog who sings a song about how they’re both doomed because they can’t confront the humans, who are their common enemy. Humbled by her song, the raccoon tribes make peace and resolve to fight against human encroachment together. Thus Tanuki nationalism is born.

The raccoon dog elders then hold a council and decide to seek out the transformation masters, who’ll teach the tribes the lost art of transformation — which is to say, they have endeavored to return to tradition. Some tanuki can transform at will; the males in particular can transform their testicles into objects many times their size, and this power is soon put to use fighting the human construction crews encroaching on their territory.

The tanuki assault the construction site during a storm and manage to kill or injure five workers. They celebrate, but the Japanese government refuses to stop the development. In the process, the bravest of raccoon dogs and chieftain of the Tama tribe, Gonta, is severely injured, forcing field command onto the Shoukichi’s shoulders. Rather than aggressively seeking to kill humans and destroy equipment, he prefers to frighten them away by transforming into youkai and convincing them that the woods are haunted, however. Tellingly, this does not work, but the raccoon dogs are having so much fun that they do not stop to reconsider their strategy. Does this remind you of something we tend to do — those incredibly fun things that nevertheless do not help our cause? You can’t stop a development by pretending to be ghosts, and you can’t build a political platform by owning the libs.

Unlike us, the tanuki have a problem with overpopulation, or more precisely, of being forced into ever-smaller patches of forest, and then find food and space to be in short supply. They soon institute a practice of celibacy in order to control their population, but the ever-spirited Gonta retorts that they do not have a problem of having too many raccoon dogs, but rather a problem of too many humans. I believe that white populations in our ancestral homelands are in a similar predicament: The problem is not so much with decreasing white birthrates, but rather with too many racial enemies in our lands. The falling white birthrates have many causes, but the rising costs of living and raising children caused by the influx of hostile racial aliens is one of them. Removing them will provide much-needed breathing room and resources, which are ours by right.

Not all raccoon dogs are capable of transformation. A majority of them, in fact, are only ordinary animals. But a small minority — an elite, if you will — is capable of transformation, and is therefore able to take the fight to the humans. One of these transforming raccoon dogs is sent to bring the Transformation Masters, three elder tanuki, from far away. They soon arrive and begin directing the transforming tanuki in Operation Specter, a ploy to scare the humans away by putting on a parade of demons.

Operation Specter causes a big fuss in the human world, but its effect is diminished when the owner of the Wonderland amusement park claims that it is a publicity stunt. After this it is clear that the raccoon dogs have failed to chase the humans away. But then a fox arrives, and offers to show the raccoon dogs a way to transform into humans so that they can live in the big city disguised as them, as the foxes are already doing. He even offers them jobs in the Wonderland amusement park as entertainers. The price would be abandoning those raccoon dogs who cannot transform, and the fox quite nonchalantly claims that they have already died out, anyway, calling it survival of the fittest. The tanuki council rejects this offer, mostly out of solidarity with those who can’t transform. It is then clear that the raccoons simply cannot save their way of life.

Gonta and his hardliners elect to revolt against the modern world directly and fight the humans head-on. They are confronted by loggers, construction workers, private security guards, and finally, riot police. The dogs are killed, but not before they inflict casualties on the humans and destroy a significant amount of their construction equipment. Gonta dies as he lived: with honor.

Meanwhile, Master Hage, the oldest and wisest of the Transformation Masters, organizes the non-transformers into a cult based on dancing in order to keep their spirits up in the time of lost hope. Here we see another parallel with dissident politics. What is the Q-Anon cult and related manifestations of blind hope if not a dancing cult — a kind of white man’s ghost dance where if we wave the flags hard enough, things will go back to normal? Master Hage transforms his testicles into a treasure ship onto which he loads these lesser raccoon dogs and sails with them down the Tama River, those aboard believing that Buddha himself will come to take them up to the heavens. Nothing of the sort transpires. When Master Hage runs out of energy, the ship disappears and the lesser raccoon dogs drown.

The remaining tanuki put on a final show for the humans and themselves, transforming the now-developed land into what it once was: an idyllic forest dotted with traditional farms. The humans are amazed and frightened by the spectacle, and the vision is so powerful that it even conjures up the tanuki themselves as they were before the developers arrived. Seeing themselves as cubs overwhelms them and breaks their concentration. The vision of the hills as they once were is then lost forever, but not before little children can see the tanuki. Then they begin new lives, like the foxes before them, as humans. The modern world is victorious. The raccoon dogs furiously chug energy drinks so that they can remain in human form. Shoukichi, having assumed the role of a human salaryman, wonders how humans could live in the exhausting, unnatural way of the modern world.

The three responses – those of Gonta, Master Hage, and Shoukichi — are the three courses open to the standard-bearer of a lost cause: die with honor, lose yourself in fantasy, or bend the knee, continuing to live on in an unnatural position and running at full speed just to stay in the same place. The destruction of the forest means that there is no longer an authentic existence for the raccoon dogs. Those who can transform live as humans; those who cannot end up as urban pests, eating garbage and depending on the people’s kindness. We as white people are faced with a similar threat. Now, I do not believe our cause is hopeless or that our defeat is inevitable, but with every passing day, I am faced with the possibility that I may never live to see my own glorious self-destruction. Life, wretched and unnatural, will go on.

More and more I am convinced that if victory comes, it will come from transformative processes which we employ on ourselves. More and more I am convinced that it will require the extraordinary efforts of extraordinary men to bring our cause to victory. Can I transform, as easily as the raccoon dog, into an entity of my own choosing? Having little access to the spirit world, my efforts to transform my testicles into a golden ship have so far been unsuccessful. But I can transform myself into a more perfect man, and more specifically, I can transform myself into a weapon in the hands of our cause. This is a question of willpower, and even more than that, of mental discipline. I’ve discovered in my praxis that the two are not the same thing, even though they may be related. Willpower is akin to anaerobic resistance, the ability to sprint in short bursts, whereas discipline is akin to aerobic endurance, the ability to remain active for a longer period of time, and also depends more on structure and method than sheer force of will.

Pom Poko is one of those films that has to be seen to be understood. Film is always a visual medium, and animated film even more so. Anime, being characteristically Japanese, owes much to that culture’s fanatical and almost self-destructive devotion to beauty. You can read Jeelvyan jeremiads about revolt against the modern world, anaerobic resistance, and raccoon dog testicles, or you can treat yourself to Studio Ghibli’s masterful and loving depiction of tanuki folklore and western Tokyo before it was western Tokyo. I warmly suggest you do the latter.

« Terror in Waukesha, a Review