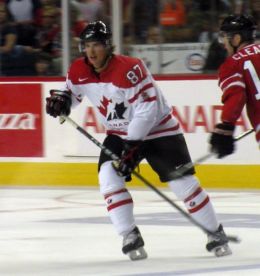 I’ve been thinking about Canada a lot lately, mainly because of the truckers, and mainly because I’m preparing to review George Grant’s Lament for a Nation with my true blue Canuck friend Endeavour on Sunday’s Writers’ Bloc (10 PM CET, 4 PM EST, 1 PM PST). The review’s been a long time coming, predating the truckers. It even predates the current iteration of The Writers’ Bloc.

So here I am, reading a book about Canadian nationalism which laments the loss of the Canadian nation. Of course, I’m gonna listen to the best songs about the Great White North while reading. Unfortunately, I only know one: Warren Zevon’s “Hit Somebody (The Hockey Song)” featuring David Letterman (yes, really).

Released in 2002, it is an epic tragedy about the life career of Buddy, a hockey player from “Big Beaver by the borderline.” Wikipedia tells me that it’s an organized hamlet with a population of 15, the ever-proverbial small town. Buddy is passionate about hockey, dreaming he is Rocket Richard, but he’s not very good with the puck. But the Calgary Flames soon pick him up, because there’s always room on the team for a goon.

Now, first of all, I want to make it clear that I don’t understand hockey, nor do I intend to start understanding it at this late stage of my life. But apparently, a goon is a hockey player who is tasked with fighting the other team’s players and protecting his team’s star players from the opposing team’s goons. This sounds ghastly to me, exactly what a savage tribe of unreconstructed Northern barbarians would consider to be sport, but it is what it is. Ultimately, the sport itself does not matter, since we’re going to delve into something far more important than that.

When I say the song is an epic poem set to music, I am not kidding or exaggerating. It tells us the tale of an extraordinary man fighting through life, seeking an unattainable goal — literally, as Buddy the farm boy from Big Beaver has never scored a goal in his entire career. It gives us a glimpse into his yearning soul and is a beautiful aristeia for Buddy the Goon in both his bloody career as enforcer and on the final night of the final season, when he finally scores his long-coveted goal. It is an epic tragedy, as Buddy the King of the Goons (with a box for a throne) dies shortly after scoring the first and only goal of his well-fought life. All of the elements of Joseph Campbell’s hero with a thousand faces are present in this Canadian farm boy. He is a hero whom we live through.

What strikes me is that even in 2002, the mercenary nature of sports is commented on. As the refrain says,

These ethnicities are all white (the alternate refrain mentions Swedes as well), but they’re all non-Canadian outsiders, and they’re pitted against the farm boy from Big Beaver. Even in the end, when Buddy puts the biscuit in the basket, the man who cold-cocks him on his follow-through and kills the big man is a Finn, a foreigner. This is a prominent part of the song, making a point of enumerating these various ethnic groups playing for Canadian hockey teams.

One has to ask what motivation a hockey fan would have to root for all these foreigners wearing the home team’s colors? Why should a man from Calgary support the Flames if there are no Calgarians or even Canadians on the team? Furthermore, I find it baffling that people with no connection to cities where teams are based support these teams, as I often see with Eastern Europeans supporting Western European football or American NBA teams. I personally know two Real Madrid fanatics who’ll punch you in the face for intimating that Barcelona might have a better team. None of them have ever been to Madrid or Barcelona. Many people I know will support a team “because it’s good,” in some bizarre version of bandwagonism. The fact that the men actually running in those jerseys have nothing in common with them doesn’t bother them at all. As my favorite Jew Jerry Seinfeld put it, they root for the clothes.

I hadn’t gotten excited about sports in a long time, but on a spring day in 2019, I attended a rugby game between my local team and foreign guests. Rugby in Macedonia is completely amateur and virtually non-existent. By my reckoning, there are only two teams, and they both play poorly. I’m not a rugby expert, either, and while watching the game, I couldn’t comment on the plays, but I couldn’t help but notice that the players’ athleticism left much to be desired. But I found myself cheering my home town’s team nevertheless, for one simple reason: I went to high school with half the players, and I knew a few more from my social circle. These were my people. They were dragging their feet, they came unprepared, and they got their asses kicked, but I screamed my lungs out in support for them. It was a beautiful, sunny day, and the small crowd, consisting mostly of friends and family of the home team, got properly sloshed drinking beer in the bleachers.

I compare that to the absolute indifference I have for my home football team, which was bought by a Russian Jew oligarch who proceeded to pump seemingly infinite money into it, assembling a mercenary force of foreigners to play. Even the local basketball teams have begun importing low-rent negroes from America who can’t quite make it in the NBA. Why should I root for these people or fight the opposing team’s ultras for their honor?

Many Americans — and even more disturbingly, many Europeans — recently watched the Super Bowl. From what little I understand about it, it’s a spectacle where negroes collide into each other while whites throw an egg-shaped fetish above their heads. This is interspersed with clips of intense anti-white propaganda which the American regime outsources to private sector contractors. There’s also apparently a halftime show where once upon a time, some ageing hag’s tit was revealed for all the world to see. It may come as a shock, but I regret to inform you that if you’ve watched this ugly demonstration, you’re a spiritual degenerate and will not be allowed to live in the ethnostate. Indeed, in the future, known sportsball watchers will face a punishment of up to 20 lashes and forfeiture of all property. Vile spectacles of mercenary combat and anti-white propaganda are absolutely haram and enjoyment of them is irredeemable.

Regardless of all that, there will be sports in the ethnostate. Man is a creature who enjoys sport, both as a game simulating war and as a practical equivalent thereof, an outlet for his animalistic, violent passions, both as participant and spectator. It’s also an excuse to get out of the house, enjoy the Sun, and meet with people. But sports must be local.

Far from being an ugly spectacle of blacks chasing balls or slamming into each other, sports must once again be rowdy, yet noble contests between local worthies competing for the position of village hero, just like Buddy the Goon from Big Beaver, a giant of a man and salt of the earth Canadian farm boy, a veritable Hercules on ice.

» Broke Buck Mountain (of BS): The Origins of The Willie Lynch Letter