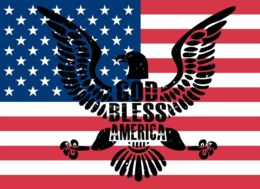 Asking “Is America a More ‘Christian Nation’ than Ever Before? [2]” generated a lot of responses on Counter-Currents. My article looked into the argument that a post-Christian America continues to display strongly Christian characteristics, as even some evangelicals now claim. Our society is still suffused with moralistic fury and commandments descended from Christians’ popular conceptions; today, people merely don’t believe in the supernatural part. There are of course critical elements of traditional Christianity missing in liberal secular Christianity, but one can see where its roots lie.

This is not an argument for waging war on Christianity or reviving paganism. It’s simply an observation. As is the case whenever the Right delves into these topics, the article inspired passionate responses from nationalists who insist that real Christianity is completely different from the regime’s ideology. In the comments, Lord Shang argued that “Christianity and wokeness are antithetical, and that Christianity both allows for the measures necessary to ensure white preservation and even mandates them as a matter of true justice.” He also accused your humble writer of pursuing an insidious agenda to separate nationalists from Christians and persuade nationalists to ignore Christians, or “even aggressively oppose [Christianity].”

Fellow CC writer William de Vere wrote a thorough article [3] on the inherent opposition between humanism and Christianity, partially in response to my own work. De Vere makes many solid points about “Gothic” Christianity’s compatibility with our views and its incompatibility with secular liberalism.

These responses motivated me to clarify some things about what I am arguing in regards to Christianity and the Right. The Dissident Right has debated about faith for many, many years. Some say we need to recover the true Christianity of our forefathers. Others say Christianity is irredeemably corrupt and that we need to become pagans. And so the fight goes on, forever and always.

The point here is not to join in the battle but to observe some facts about the present state of Christianity and its relationship with nationalism.

The most important thing to remember is that, even if we wanted to, we are never going to make white people give up Christianity. It’s the religion of the majority of our people, especially those most open to our views. The average white person still thinks being a Christian is a sign you’re a normal white person. Deviation from that strikes them as abnormal. Self-declared atheists and agnostics represent some of the most strongly Leftist demographics [6] in our country. We ostracize ourselves by insisting that our movement is anti-Christian.

The proper Right-wing answer to the religion question is to leave it to the individual to decide. The majority of people we’ll attract will be Christians, and we have to respect that. We’re going to have people with all kinds of religious beliefs, but Christians will always be the majority. Some of them are devout Christians, others only attend church on Christmas.

This shouldn’t prevent us from having level-headed discussions regarding Christianity and other religions. But as a movement we can’t declare ourselves hostile to the faith of the majority of our people.

We should also resist the temptation to present ourselves as a fundamentalist Christian movement. There are good reasons for this. For one, in order to be an explicitly Christian movement we would need at least some support from existing Christian institutions. The Moral Majority was a major force because it was supported by evangelicals all over America, and the pro-life movement would be nothing without the support of the Catholic Church and evangelicals.

The problem is that every Christian institution is hostile towards us. Most on our side understand this. De Vere and other commenters acknowledge that the Pope and other Christian leaders today cheer on such things as mass immigration and Black Lives Matter, but they will then insist that these leaders are fake Christians and that true Christianity exists somewhere else and will one day sweep them away. It may be true that these Christians are heretics, but we cannot deny that this is what organized Christianity is right now. There are some exceptions, like the Russian Orthodox Church and the Society of Saint Pius X. However, these institutions are tiny in the West and neither of them is explicitly identitarian.

Even many conservative Christians are just as anti-identitarian as Pope Francis. The Southern Baptist Convention [7], despite some notable dissenters, supports Black Lives Matter, white racial guilt, and mass immigration. The pro-life movement, which is deeply entwined with the separate cultures of evangelicals and devout Catholics, primarily argues against abortion on the grounds that it’s racist eugenics. David French is not an outlier among evangelicals, even though the ordinary evangelical would be disgusted by his turn to wokeness. Just look at bestselling Christian author Beth Moore, who demands that whites do more to atone for racism [8], or the most popular acts in Christian Contemporary Music, who are noted for their very public support of BLM [9].

There are countless other examples. Who can point to a major Christian leader who voices identitarian views? The African Cardinal Robert Sarah [10]? That may be all.

This doesn’t mean that one should abandon Christianity if your minister or priest isn’t talking about the Great Replacement. Religious choice is determined by family background and/or because a practitioner feels the faith answers life’s fundamental questions. People don’t usually demand that their faith completely align with their politics, and that’s fine.

People just need to be realistic about what Christianity is today. We can make the most compelling argument for Gothic Christianity, but that won’t bring it into existence in the real world of today. We will still be vastly outnumbered by the Dan Cathys getting on their knees [11] and shining black people’s shoes. Declaring ourselves a Christian fundamentalist movement would further create the problem of being denounced by every Christian institution. It also distracts us from our central struggle.

The other thing to keep in mind is that whites are no longer the majority of Christians, nor are we the future of Christianity. The majority of devout Christians today live in Latin America and Africa [12]. In the future, they will also live in Asia. Our own people remain nominally Christian, but their devotion is wavering. The Catholic Church, in large part, supports mass immigration to replace the whites who are leaving the pews. If Christianity is seen as a central part of our identity, do we see the devout African as more our comrade than the secular European? Most nationalists would say no, but nearly all conservative Christians would say yes.

Besides potentially diverting us away from the central struggle, portraying ourselves as fundamentalist Christians can alienate many of the people we are trying to win over. We are not looking to win over atheists in Dr. Fauci t-shirts. We are trying to win over smart, young white people, and the majority of them are turned off by Moral Majority rhetoric and they aren’t that religious. To win them over, we need an approachable message that inspires them and offers answers to the issues they face in their own lives. Giving them esoteric Biblical interpretations about why white people should exist is not the way to go. Those devout people who hold views similar to ours are primarily older. 22-year-olds aren’t demanding Biblical arguments for identitarianism.

Nationalists pride themselves on offering the cold, honest truth — no matter how offensive it is. We should accept what organized Christianity is and realize that it will not be an ally in our fight. It will only come to terms with us when we win. Until then, it’s best to be more secular in our approach to politics.