The (Lucky) Lives of Colin Flaherty 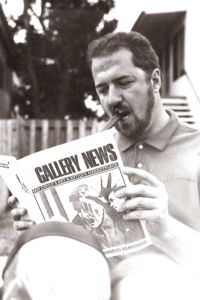 I found some intriguing perspectives in the recent batch of obituaries for Colin Flaherty, who died on January 11. They almost all recall him as best known for his internet videos and bestselling books on under-reported black crime (White Girl Bleed a Lot, Don’t Make the Black Kids Angry, et al.).

Maybe that’s a valid point today. However, having known him for 30 years, I thought of this post-2012 phase as just a minor coda to his career, sort of like Laurence Olivier doing Polaroid commercials in the 1970s. If you had to explain to clueless people who Sir Laurence Olivier was, you’d mention the commercials, and the folks would think, “Oh, he’s this guy who sells cameras.”

I was aware that Colin’s books were big bestsellers at Amazon — at least, till they canceled him. I’d meet him occasionally when he came up to New York for a media interview, or whatnot. I remember walking around Rockefeller Center with him in early 2015. Every few minutes he’d take out his iPhone and check his latest Amazon sales (“500 more copies! Still number one!”).

Colin was peeved a few months later when a New Yorker article by Evan Osnos called him a “white nationalist” who’d done a “self-published book.” (There was a similar swipe at Jared Taylor, who likewise rejected such descriptions.) The truth was, for most of his adult life, Colin regarded himself as a moderate conservative with a decided libertarian streak. But he wasn’t going to crumple because some Leftist hack with an agenda chose to mischaracterize him. Colin was an old political consultant, and he had a tough hide.

For many years he was a top reporter and public-relations consultant in Southern California. He ghost-wrote op-ed columns for his Congressman father-in-law, freelanced other pieces under his own byline, and cranked out press releases for politicians and businesses.

At the San Diego Press Club awards in the 1990s, he always took home some hardware. On the PR side, he had a long roster of political clients, as well as such gilt-edged corporate accounts as Qualcomm.

He was a pro at that punchy style of PR writing where every sentence is a simple declarative copy-point, and no paragraph has more than two sentences.

Colin got a kick out of being regarded as the top local public-relations guy. He liked to say Flaherty Communications was really just “a guy in a bathrobe, with a cigar and a telephone.” For a while there was also a hamster. His kids had brought it in on a visit (he had custody of them part-time). Little hammy soon made a prison break. It would turn up again every few days till the local cat got it, or something.

Often enough, the bathrobe guy would get dressed and take his son and daughter to the pier at Ocean Beach. I’d sometimes join them there. There would always be some withered hobo types fishing off the dock, pulling up little, mangy-looking fish. The kids had a routine for this. Walking by, they’d call out, “Mmm! Some mighty good eatin’!” Then we’d repair to the pier café for its specialty, which was not anything fishy, but jalapeño poppers.

Sometime around that hamster period, mid-1993, Colin drew me into an offbeat, short-lived enterprise. I think it was called NewsFax. We’d produce news briefs and political cartoons, I’d lay them out with QuarkXpress, and then we’d fax this tidy sheet of business and political gossip to our select list of subscribers. In those days most people didn’t have e-mail, but they did use fax machines. The past is indeed another country.

NewsFax was never expected to become a long-term profitable concern; it was more of a calling card to drum up PR clients. In a non-election year, demand was thin for press releases and opinion columns. We’d tool around on Colin’s motorcycle and call on friends who had substantive jobs — in banking, mortgages, brokerages. Colin had been working in local media for a decade and he knew everybody who was anybody, which maybe wasn’t all that hard in a small pond like San Diego. He’d even been friends with Dan Broderick, the physician and malpractice lawyer who was famously shot by his ex-wife Betty in 1989.

He’d turn up frequently on the radio, sometimes as a talk-radio substitute host, sometimes as an interview guest. I recall doing the Roger Hedgecock show with him in 1992, and with the KPBS guy, Dan Erwine, the following year. When Colin was going to sub on a radio program, he’d send out a three-line whip beforehand so all his friends could phone in and shill for him. Years later, when he moved back to Wilmington, Delaware, he sometimes co-hosted his brother’s talk-radio show. I’d met the brother years before, back when he was a Joe Biden aide. In late 2012 Colin had me on the show as a third co-host. That didn’t work out too well because I seized up with a fit of the st-st-stutters.

He had a charismatic personality and a magical Midas touch in almost everything he attempted. Colin would come up with a bizarre idea like NewsFax, and by golly, the thing really did bring him those well-heeled business clients. Years later, when he started writing and selling his edgy books, that looked like a cockeyed long-shot, too. (What’s more hopelessly pathetic than thinking you can make a living by selling your own books?)

His luck always seemed to hold. We’d go to Indian casinos out in the desert, and he’d clean up at the blackjack tables. (Not me; he’d give me $50 or $60 to bet, and I’d always lose it all or just maybe break even.) If you went to the Del Mar racetrack with him, your best bet was to bet like Colin, if you wanted to be in the money. We did a lot of pinball on Newport Avenue in Ocean Beach, and he always beat me. He always beat everyone.

Eventually he focused mainly on one client, a large housebuilding concern in San Diego and Riverside counties. As part of his compensation he got a brand-new million-dollar McMansion (well, a half-million at least), and it was next to a golf course.

Colin would also beat you at golf.

Eventually his success as a PR and political operative brought him into the enemy’s sights. In 2003, a California state commission accused him of violating campaign finance laws 38 times during 1997-1998. The alleged “violations” were preposterous, one of them being an undeclared “donation” of $4,000 worth of party balloons and birthday cake for Gov. Pete Wilson; the others were mostly tiny political donations from Colin’s friends and associates, whom the campaign supposedly later reimbursed. One wonders how many millions the State of California spent over five years to come up with these trivialities.

Five years later the economy tanked all over, and Colin’s main client filed for bankruptcy. That was when Colin finally retreated to his family’s home back east. He did a hitchhiking road trip around the West and wrote a travelogue-memoir about it, Redwood to Deadwood (2012), sold mainly through Amazon.

That writing/publishing experience turned out to be training wheels for the next phase of his career, beginning with White Girl Bleed a Lot, which came out shortly afterwards. At the end of the day, then, having his PR client go belly-up was a great stroke of luck. Otherwise he might never have become an Amazon bestselling author, known and beloved by millions. (Worse luck for me, though, as I had stored 20 years’ worth of diaries and pictures in Colin’s basement in 2004. When Colin moved out he transferred all the basement stuff — his, mine, and everyone else’s — to his son’s house. After which it all unaccountably vanished.)

I was surprised to hear the sad news when he died, but I’d detected failing health after he came back from his hitchhiking trip. When I went to an art show with him in 2011, I noticed he was getting rather wobbly on his pins, especially if he had to stand for more than five minutes. At first I put this down to his extreme height, which he claimed was 6’5″, but which I personally suspected was a couple inches more.

So I take a Pollyanna-ish view about his death at 66. It could have been 56, but his lucky star granted him another ten years. And a whole new career. And then he had the good fortune to get to know Jared Taylor. (Whom I had also first met in the early 1990s, in Southern California. Strange coincidences!) In June 2019, when Colin phoned me up and invited me to join him, Jared, and others in a backyard talkfest in Virginia, it was like hearing that Stanley had found Livingston. But that, alas, was the last time I would see Colin.

As I recall, he once had a girlfriend who was a high-flyer at Dow Jones. Colin had written for the San Diego Business Journal, among many others, and it was suggested by me and others that he, too, should aim high and land a job at the Wall Street Journal. That did not appeal to Colin in the least. He did not want to go Back East.

In Ocean Beach, while doing one of our pinball tourneys in the early ‘90s, I joked to him that when people in California speak of the East Coast, they seem to imagine a vast unbroken slum of red-brick tenements, complete with fire escapes and wash lines and broken bottles in the street. The original set of Sesame Street, in other words.

“But that is what it’s all like,” insisted Colin, focusing seriously on the pinball machine.

There was a seed of something there, even if neither of us knew it.

« Is the US Following the British Empire’s Road to Collapse?