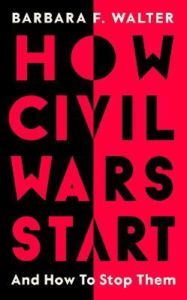 Barbara F. Walter [3] is a Professor of Political Science at the School of Global Policy and Strategy as well as an Adjunct Professor at UC San Diego. She is also an expert in civil wars and how they start. In her recently-published book, How Civil Wars Start, she makes the case that the United States is headed towards civil war.

This second civil war is forming in a considerably different way from that of 1860-65. During Mr. Lincoln’s War, the United States effectively divided into two different countries and it was fought by uniformed men who waged the conflict in a bloody but chivalrous manner. Today’s road to civil war is more like the path taken by Lebanon or Yugoslavia. America is in for some hard, unchivalrous knocks ahead.

On the negative side, this book is intellectually shallow. It is written from the perspective of a nice, liberal white lady without deep roots in the United States. It also focuses on the Trump administration, with only a superficial understanding of how a political novice like Donald Trump acquired such a massive following so quickly. Nonetheless, some of what Walter writes I agree with.

Walter has studied civil wars across the world and says they all have a few things in common. The first is the concept of anocracy. This is when a political entity operates somewhere between an authoritarian system and a democracy. People can vote, but there are all sorts of processes that disenfranchise a portion of the electorate. Then factionalism arises. Factionalism occurs when an identity group of some sort organizes into a single political movement or party. Once that occurs, “ethnic entrepreneurs” such as Slobodan Milošević arise. For this to happen, the people within that faction must feel that their status is declining and fear that they are being threatened with genocide. The group under threat is usually those natives of a region who see themselves as the custodians of the nation, such as the Serbs in Yugoslavia, the Catholics in Ireland, and so on.

The above summation contains both truth and intellectual shallowness. The problem is the word “democracy.” Democracy is a slippery term. It can be a process where 51% of the foxes vote against 49% of the geese over what’s for dinner. It can also refer to a nation that has a form of government that is elected, and where the losers tolerate the electoral victories of their political rivals. This should probably be referred to by a term like civil democracy rather than “democracy.” A civil democracy is a fragile political culture, and the conditions for it to exist are not fully understood.

Walter goes on to describe civil wars in Yugoslavia, Iraq, Myanmar, Mindanao, Assam [4], and Abkhazia [5]. In both Iraq and Bosnia, she personalizes the war with anecdotes from young women. In Iraq, the young lady in question describes going about her daily life in Baghdad when people suddenly started asking if she is Sunni or Shi’a. Such a distinction did not matter before the American invasion, but became of immense importance once Iraq moved from an autocracy to an anocracy. And in Bosnia when it was still part of Yugoslavia, one young woman discovered the seriousness of the situation when she and her friends sang an Ottoman-era love song at a wedding but stopped when another guest snapped at them about their “Turk songs.”

Walter says that today’s political polarization of the United States started with the 1964 Civil Rights Act, but she doesn’t really follow up on the ramifications of that other than to use the well-worn phrase “white resentment.” She also shows that the Republican Party has become the party of whites since Obama’s election. America’s political culture now has an organized faction based on an identifiable group.

Shadow campaign? Sounds like fraud to me, and because the 2020 election was so unusual, and because it is known that the elections of 1876 and 1960 were determined by fraud, one can conclude that 2020’s big vote was as crooked as a barrel of snakes. Regardless, perception is more important than truth. America is now an anocracy, no matter which story you believe.

Then there is the status of whites. It is not controversial to say that the status of whites is threatened by the Great Replacement, although she doesn’t use those terms. Nonetheless, three factors for civil war — anocracy, a faction, and loss of status — are present in the United States at this time. All that is needed is an “ethnic entrepreneur” to provide leadership, and there are many developing.

Walter also focuses on the Right-wing militias of the 1990s and ties them to the January 6 “insurrection,” and discusses William Luther Pierce’s novel The Turner Diaries. This is part of the book’s intellectual shallowness. Why didn’t she read or mention Wilmot Robertson’s The Dispossessed Majority? By focusing on these media-created and enhanced golems from the “militialand” of Michigan, she blurs what should be a clearly-articulated pathway to avoiding civil war.

Her unfocused proposals for reform are to increase the social welfare safety net, lessen immigration, end the Electoral College, and look to places like Birmingham, Alabama, where whites vote for sub-Saharan candidates, to prove that a non-white future will work out. But she misses the point, of course: Most whites fled Birmingham, and the town is now a ruin like Detroit or East Saint Louis. It’s not working out. She also insists that social media is amplifying resentments.

Most of her other proposals align with what nice white liberals usually want to do. I find it curious that she thinks ending the Electoral College will lessen tensions. After explaining loss of status and hopelessness in the political process, I cannot fathom why she would wish to cause a further decline in status for the residents of every state aside from Texas, Florida, California, and New York. The Electoral College is keeping civil war at bay — for now.

America’s slouching journey toward something like 1990s Bosnia is due to the American political establishment’s terrible mistakes — especially the Democratic Party since 1960 and the “Rockefeller/Bush” wing of the Republicans. Walter is correct that the crisis began in 1964 with the Civil Rights Act. While she insists that this was morally correct, a body of law that unravels the civil democracy of a society and brings political tensions to a point where there are armed protests over trivial matters (like Obamacare) and a decades-old militia movement is inherently immoral and unwise.

White acceptance of the “civil rights” movement was predicated upon a social contract between whites and sub-Saharans that was not fully articulated. In 1964, whites agreed to end segregation and other guardrails around sub-Saharans with the understanding that sub-Saharans would behave in a civilized way. While some sub-Saharans have lived up to their end of the bargain, the vast majority have not. Crime, fueled by Africans, exploded after 1964, and didn’t start to come down until the Clinton administration — aided by then-Senator Biden — enacted anti-crime legislation that put a large proportion of sub-Saharans in prison.

Sub-Saharan behavior, not social media, is what drives whites into the pro-white political fold. My own personal intellectual journey started when the battalion commander of my airborne unit gave a briefing about the dangers of white supremacists, and a year and a half later I was well-versed in black criminality as a very junior commanding officer adjudicating criminal complaints under the Uniform Code of Military Justice.

Then there is the established political elite’s unjust actions, the so-called Deep State. In 1964, consummate political insider Lyndon Baines Johnson got the United States neck-deep in its first quagmire war. Since then, the quagmires have come fast: Somalia, Libya, Syria, Iraq, Afghanistan, and now Ukraine. All of these conflicts are voluntary, and in each case it was clear from the outset of the campaign that it would be a disaster, and yet every administration except for Trump’s have kept diving headlong into these catastrophes.

To put it plainly, the political elite, with a few exceptions, have made poor choices ever since the Bay of Pigs invasion. The anger over “civil rights” and the political establishment has nothing to do with resentment; it is a justified sense of moral outrage in response to sub-Saharan pathology, economic decline, FBI oppression, and disastrous foreign interventions — especially since the end of the Cold War.

A Cause for Hope?

The fact that Walter acknowledges that immigration is an issue is an enormous gain for us. Furthermore, she mentions the idea of the white ethnostate — in a hostile way, granted, but the fact that it is mentioned at all is a win. Back in the 1990s, when Bosnia was the bad news delivered on our doorsteps each morning, gay marriage was mentioned, but only in hostile terms — by everyone.

She also notes that armed militias in Assam in India and Abkhazia (between Russia and Georgia) succeeded in stopping population displacements. If the Abkhazians could put a stop to Stalin’s policies, American whites can turn around Senile Joe’s anti-white policies.

Nonetheless, I don’t think that pro-whites should join a militia, even though I do believe that the United States is already in a low-grade civil war. I believe that pro-white positions are seeping into the consciousness of most whites, even those in the same circles as nice white liberals like Walter. It is entirely possible that this situation will end the same way the Soviet Union did: One day, everyone will suddenly realize that everyone else is pro-white.

In the meantime, I encourage my readers to work hard and to be good citizens. The most critical strategy for whites seeking to take back America is to provide a competent support staff for the next pro-white politician to obtain high office.