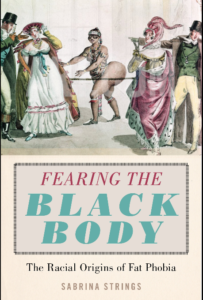 This was a yummy, provocative idea for a book that didn’t quite work out. Its proposition is that fat-shaming and racism and white supreemism are all part of the same deal. Their history is intertwined. Hundreds of years ago, Europeans looked at the strange, repellent physiognomies and fleshy bodies of the African Negro, the Bushman, and the Hottentot, and were both fascinated and repelled.

As a result, in the fullness of time, white women evolved a beauty ideal that prized clear, fair skin, chiseled features, and — most significantly of all — a slender, even anemic-looking figure!

Or, to quote the author’s words at the end of book, describing the argument she believes she’s just spent 200 pages successfully propounding:

For decades, white feminist scholars and historians focused largely on the impact of the “thin ideal” on middle- and upper-class white women. They claimed that the thin ideal was oppressive, but also suggested that they did not know how it developed. This book endeavors to address that question, adding a much-needed intersectional component to the analysis of the development of fat phobia . . . [T]he fear of the black body was integral to the creation of the slender aesthetic among fashionable white Americans.

Of course the whole thesis is silly and shallow. Feminist rhetoric notwithstanding, there’s no mystery as to why women who can be stylish and slender choose to be that way. It has to do with aesthetic sense, physical and mental health, a sense of well-being, etc., etc.

The “slender aesthetic” is not some cultural construct formed by Marxian struggles of class and race. The human figures are lithe and slender on Greek amphora, in Medieval manuscripts, in Early Netherlandish painting. Moreover, white people do not, by and large, bother themselves much about what Cullud Folx think and do. They may notice and get annoyed when too many 400-lb. African-Americans wander into their field of vision, filling whole bus seats and blocking subway entrances. They might even vaguely wonder how it is that anyone could become that obese. But that’s really about as far as it goes. Whatever the author might really believe, whites simply do not view blacks as negative role models whom they fear turning into. 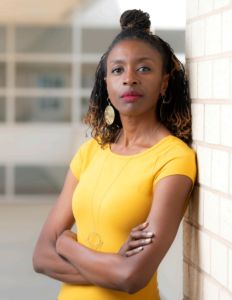 And lastly: There are black women who keep themselves fit and stylish without (I assume) imagining they’ve gone and sold out to the honkies. The author of this book, for example.

Sabrina Strings — Assistant Professor of Sociology at UC Irvine, as well as a 200-hour certified yoga teacher, as she proudly informs us — never really brings home the bacon. She can’t prove her case because she can’t formulate it in her own head. I wouldn’t have minded if she’d given us some loopy, conspiratorial argument; e.g., whites forced blacks to become fat in order to perpetuate enslavement and systemic racism! That might have been fun. Instead, what we get is limp, damp, inchoate theory, poorly explained or illustrated, even though sprinkled with vague maunderings gleaned from such faddists as Michel Foucault[1] and Noel Ignatiev.

In a style common to young academics in the social sciences, Strings fills out her dissertation with all sorts of marginally relevant research that she’s gathered up, magpie-like, over the years. She gives us Art History slide lectures about Renaissance pictures of docile Negresses, followed by vast, fleshy European women of the seventeenth century . . . who eventually disappear into prim, bird-like Englishwomen painted by Thomas Gainsborough in the eighteenth. We are treated to numerous, often conflicting descriptions of black Africans in the seventeenth and eighteenth centuries, followed by a digression on the “Hottentot Venus,” a freakishly-buttocked creature who was given the Afrikaans name of Saartjie Baartman before sailing north and being displayed as a popular tourist attraction in Regency London and Restoration Paris, where she died in 1815 . . . after which her remains were put on display in a Paris museum for a century and a half.[2]

Moving on, we get tedious discussions of eighteenth-century dietary theories; a lengthy digression on a priggish-sounding nineteenth-century American periodical (Godey’s Lady’s Book, which you can find at the Internet Archive); the story of Charles Dana Gibson and his Gibson Girls; John Harvey Kellogg and his wacky sanitarium in Battle Creek, Michigan; and the rise of twentieth-century diet faddery and calorie-counting.

Inevitably, this grab-bag assortment of sources and subjects sometimes leads Strings well out of her depth. She is under the impression that the Kellogg who ran the sanitarium also gave the world cornflakes. No, no; that was his brother, W. K. Kellogg.

More hilariously, she quotes at length an 1836 essay on feminine face, figure, and eating habits, “written by a woman named Leigh Hunt.”

Well now, that’s a good one. Clearly Strings has never heard of Leigh Hunt, who not incidentally was for decades a regular contributor to that selfsame Godey’s Lady’s Book. Leigh Hunt was one of the most prominent English men of letters of his day, quite as famous as his late friends John Keats and Percy Bysshe Shelley, not to mention Thomas Carlyle and Charles Dickens. His light verse is embedded in popular culture even today.[3]

My guess is that our Southern California yoga teacher saw the name Leigh Hunt — a  plausible name for an up-and-coming 1990s Hollywood starlet — and naturally assumed he was a girl. You can’t blame someone for that.

Nor can I blame Sabrina Strings for what I suspect was her ur-motivation in coming up with this daffy dissertation. In recent years there’s been a lot of media emphasis, much of it indirect or accidental, on Fat Black Women. I won’t name the films, or the legal cases, or the obese politician in Georgia, but Strings cannily saw her opportunity, her opening, and made her move.

It was good timing. Pre-publication excerpts ran in a number of outlets in 2019, including the tony Lapham’s Quarterly (which, like the author and New York University Press, didn’t know Leigh Hunt wasn’t a woman).

The best use for this amusing book is to make copies of the provocative cover (front and back — get a nice hardbound if you can, then return it) and then print up a bunch of them as dust jackets for blank sketchbooks. These will serve you as cherished gifts and stocking-stuffers for years to come.

[1] Pretty much at random, I will grab this footnote paraphrase of Foucault as an example of the author’s peculiar idiom. I will award a fat red apple to anyone who can tell me what it means: “Foucault suggests that at any given historical moment, a specific meaning will attach to certain bodies. Frequently this meaning is produced within the halls of power — for example, within the disciplines of science, medicine or philosophy. However, its origins are often obscured. And, because they are attached to bodies, the meanings are easily naturalized. This is how bodies become ‘legible,’ or understood in a particular way, within a given society. Foucault, Discipline and Punish.” (Strings, p. 225)

[2] Incidentally, it’s this steatopygous prodigy who supposedly appears on the cover of the book, although neither the author nor the publisher bother to tell you this. Hardly drawn from life, it’s a comical French print made in 1830, some 15 years after her death, and titled: “The Hottentot Venus in the Salon of the Duchess of Berry.” Scientific fascination with her body was mostly focused not on her buttocks but on her huge, distended genitals, which were afterwards preserved in a jar of formaldehyde.

[3] Leigh Hunt: “Stolen sweets are always sweeter / Stolen kisses much completer”? How’s about “Abou Ben Adhem (may his tribe increase!)”? Or, surely you know: “Jenny kiss’d me when we met / Jumping from the chair she sat in”? That one’s about Mrs. Carlyle. If none of this is familiar, try Bartlett’s Familiar Quotations.

» Where Have All the Grown-Ups Gone?