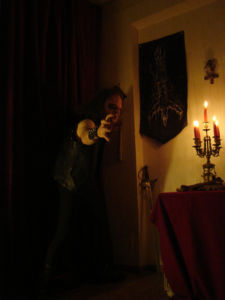 They say that you should never meet or get to know your heroes, but I completely disagree.

I have been very fortunate in my life to have gotten to know many of the heavy metal musicians who I grew up listening to. Whether I was working backstage at concerts or on tour with my favorite bands, I have seen many of my heroes at their best and worst. Discovering that your heroes and idols also flatulate and drink too much might ruin the music and childhood memories for many people, but for me, it only made the music and experiences with my heroes that much more exciting and authentic.

Unfortunately, as a result it is that much more devastating when one of my heroes passes away. This has been the case for me this month after the passing of Isidoros Galanis, better known in the underground metal community as guitarist Hjarulv Henker of Dreadful Relic, Wodulf, and Der Stürmer.

Hjarulv was born in Greece on December 3, 1974. He grew up listening to various underground metal bands of the 1980s. After being involved in tape-trading and publishing band-related zines in the 1990s, he began playing guitar for a black metal project of his own that would become infamously known around the world as Der Stürmer.

Behind the overt lyrics and abrasive sound, Hjarulv’s guitar riffs and melodies struck a chord with me the first time I heard them on a compilation album in the mid-2000s. Over a decade later, I would eventually see Der Stürmer in concert. It was then that I got to know Hjarulv personally.

Having learned a little of the Greek language in preparation for my travels in the country, I decided to approach the guys in Der Stürmer at one of their concerts and offer to buy them beers in Greek. Although I probably made plenty of grammar and pronunciation mistakes, they took me up on my offer and we had a few beers at the concert venue. Hjarulv eventually invited me backstage and we ended up sharing laughs and stories about all of our favorite musicians, bands, and concerts. Over the following year, I was lucky enough to spend time with Hjarulv in Italy, Finland, and Ukraine. No matter the location, Hjarulv always invited me to the after parties following each event, and he always made sure that I was having a good time. And I always had a great time with Hjarulv and his friends.

For being such an infamous musician, Hjarulv was very friendly, humble, and relatable. He was also very funny and had a great sense of humor. He kept encouraging me to get back into music. Thus, my New Year’s resolution for 2022 is to spend less time on the Internet and more time on music. But it was adhering to this goal that unfortunately made me miss the tragic news that Hjarulv had passed away from heart failure on January 1, 2022.

The news of his death was both shocking and devastating for me. Despite being somewhat “blackpilled” by the ongoing lockdowns and travel restrictions, I had hopes of seeing all my friends, such as Hjarulv, at the next concert. And while I still look forward to attending concerts again in the future, I feel they will not be the same without Hjarulv there.

His recent passing has also made me contemplate the meaning of friendship, happiness, and my own priorities in life. I admit to becoming somewhat pessimistic about friendship as I have gotten older. I feel as though I have always done more for the people I considered “friends” than they ever did for me. As Tony Soprano explained, “Friends will eventually let you down.” Yet, for all the people who have let me down in life, there have been a handful of people like Hjarulv who stayed in touch with me and kept my spirits up. And perhaps it is better to have a few reliable people in your life than a lot of unreliable “friends.” From experience, I know that it is better to be alone than in bad company.

I have spent much of the previous year living alone, but I rarely feel lonely. Each evening, I sip whisky in front of the fireplace next to my dog and listen to heavy metal. I have spent the last few evenings listening to Hjarulv’s music, along with all of his favorite bands. Hjarulv’s music inspired me to make music in the past, and now his memory inspires me to continue writing and creating music. Thanks to him, I have rediscovered my purpose and an additional source of happiness in my life.

It is up to each person to find their own purpose and happiness in this life. When I think of Hjarulv, I think of a heroic musician who played the music he wanted to make without any compromises, regardless of all the social pressures he faced and endured. Although it was cut short, I feel that he lived a happy and purposeful life doing what he enjoyed most.

I wish Hjarulv was still alive and I know that he will be missed at future concerts. Nevertheless, his spirit lives on in the music he created and the memories of the times I got to spend with him. Until I see him in the next life, I will take his advice and continue to make music in his honor, and for “Those Who Lived and Died as Heroes.”