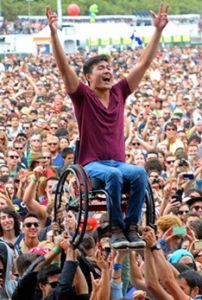 In the Contributor Notes of a recent issue of Philosophy Now magazine, one of the authors, Sailee Khurjekar, is described thusly:

She is passionate about intersectional feminism, and the representation of minorities in public life. She hopes to use her experiences as a female British Indian with Borderline Personality Disorder to advocate for diversity within education.[1]

But Ms. Khurjekar’s academic aspirations are not the point of this essay. What I find particularly disturbing is the prominence she gives to her mental illness. Borderline Personality Disorder is quite serious, and is generally defined as being characterized by a long-term pattern of unstable interpersonal relationships, distorted sense of self, and strong emotional reactions. While I wish her success in overcoming her mental illness, it seems to me that the foregrounding of the illness is just another instance of Leftist virtue-signaling. In the Left’s perverse ideology, virtue is accorded to abnormality. While I am not in favor of shaming an individual with a very serious mental illness, neither do I believe that mental illness should be celebrated. Indeed, strict privacy should be accorded to those afflicted with such illnesses so that treatment and recovery can proceed unhindered and outside the public gaze.

As such, Ms. Khurjekar’s bio is emblematic of one of the greatest problems of the postmodern age: the inability to distinguish between the public and private realms. In the Left’s semi-barbaric world, this inability is vulgarly denoted as “the personal is the political.”

Homo sapiens is distinguished from the rest of the animal kingdom in having a fully-formed inner life. While dogs have many excellent qualities, there is no canine Heidegger contemplating the doggy Dasein. Fido reacts to his environment; his life is lived exclusively in the public realm. The evolution of humans, however, is not just physical; it is also the evolution of a form of consciousness that is aware of itself. As man has evolved, he has gone from a primate whose existence was almost completely defined by his public reaction to his environment to an advanced being able to simultaneously exist in the public and private realms. Indeed, one of the major areas of philosophical contention since the beginning of recorded history has been the debate over what is properly owed to the public (or political) realm and what is obtained by the private.

The founding of the United States is a case in point. The Founding Fathers envisaged a republic composed of private, virtuous citizens who would temporarily serve in public political capacities. They made it clear that a well-ordered and just society could only exist when it was composed of rational individuals with virtuous and well-ordered inner lives. Living a private virtuous life in which the family is the essential unit of the social hierarchy was the goal of early American politics. In modern parlance, for the Founding Fathers, the public political realm existed almost solely to prevent moral hazards from affecting the private realm.

For the Leftist, however, the private realm is a horrifying concept. The Leftist is seemingly compelled to lead an almost exclusively public existence. Lacking morality and a hierarchical and rational conscience, the Leftist has no ethical core to lead him safely through “the dark night of the soul.” Adrift in a haze of situational ethics and moral relativism, the Leftist can only find temporary sanctuary in public outrage about an ever-shifting congeries of arbitrarily-defined “offenses.”

It is therefore very humorous that the overly-credentialed and very under-educated bien-pensant Leftist Karens and the Soy Boys who love them never tire of publicly adorning their Volvos with EVOLVED bumper stickers, for it is precisely the opposite that is true. The reactionaries and small-c conservatives, who are naturally oriented to the private realm, are the truly evolved members of the species Homo sapiens. Leftists — who loathe the family, deny truth and beauty, equate the personal with the political, and cannot stop from public virtue-signaling — live in a primitive, unevolved state of hysterical public reaction to an environment that they neither understand nor have the moral courage to contemplate.

Our Leftist brethren are probably beyond redemption. In a way, I am almost glad that they have turned their backs on the grandeur and beauty of Western Civilization. The magnificence of the West, its triumphs and accomplishments, are too good for the undeserving Left. Let the Left wallow in self-pity and hysteria, and let those of us on the Dissident Right hold fast to the patrimony that has been bequeathed to us and that only we are deserving of retaining.

Unlike Ms. Khurjekar, we on the Dissident Right understand that virtue is not defined by our deficits and sins, but by the overcoming of those obstacles that beset us. Writing about Marcus Aurelius, the Roman historian Cassius Dio reminds us that greatness is not defined by public victimhood, but by private perseverance and virtue:

He [Marcus Aurelius] did not meet with the good fortune that he deserved, for he was not strong in body and was involved in a multitude of troubles throughout practically his entire reign. But for my part, I admire him all the more for this very reason, that amid unusual and extraordinary difficulties he both survived himself and preserved the empire.[2]

« When I Became a Man

» On the Murder of Sam Collington: The Liberal Snake Eats One of Its Own