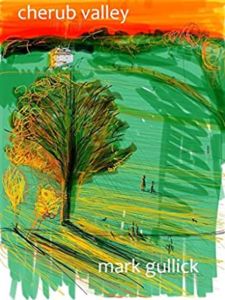 Before it was overshadowed by social media, click-bait, and online shopping, the internet provided the dawn of the twenty-first century with limitless potential. It’s worth noting that there was a dark side to it as well, and Mark Gullick’s Cherub Valley shows its readers the creepy underbelly of the “invisible world of information.”

The novel takes the genre of techno-dystopia to a whole new level and leads the reader down a rabbit hole they’d surely avoid in the real world. It’s descriptive without being dense with terminology, which is a common flub of science fiction and cyberpunk writers. In addition, Gullick’s prose and short, punctuated chapters make it an easy and exciting read.

Before we knew what the internet really was, people speculated on its purpose. The 1994 documentary Visions of Heaven and Hell said the following about the dawn of the digital age:

. . . society has vanished and something formless has emerged . . . Technology is already tying us in knots . . . The computers that connect us through the web that we call the internet are carrying information that no one can control.

It is with this aura in mind that Cherub Valley is discussed.

The story’s main character is a technician for an English cyber defense corporation. He and his cell of paraspace dwellers are paid good money to shore up their clients’ systems against hackers; however, they all engage in extracurricular work of questionable legality. In this environment, friends, co-workers, clients, and corporate management are all untrustworthy. The protagonist takes solace from this anxiety-riddled milieu in his high-tech apartment, complete with a steadily learning artificial intelligence named Pico that holographically manifests itself in the form of various historical and contemporary figures. Pico was given to him by an acquaintance, Samuel, whose background is not made clear. Samuel’s chilling description of Pico and AI more generally gives a clue as to this story’s feel:

What advanced computational systems can’t do is to emulate the mind fully because information is played out in a permanent present tense. There is no past in paraspace, and no future. Sure, there are retentions and consistency guarantors and so on, otherwise programs would just fall apart, just randomise. But a guarantee of consistency of identity between one temporal state and another is not memory. There are protentions too, obviously. Projections, global predictions are in the main possible, but they are all fictionals, mirror states of the past, hypothetical foreshadowings. They aren’t properly temporal. There is no future for a computer program just as there is no past. The program thinks of all these distended states, what for us is before and after, as a series of co-instantaneous “nows.”

In addition to work and Pico, the narrator spends a significant amount of time installing electronic devices throughout a nearby valley, mapping every aspect of its terrain and downloading it to his home system for some unknown purpose.

The protagonist begins a sexual relationship with Angel, an employee from a pub he and his cellmates frequent after work. She’s an American on a student visa. Their early interaction is the only less-than-stellar aspect of the novel. If you’ve ever talked with someone from the IT department of your place of business, then you’ll know that the charming, quick-witted dialogue of the main character reads a little false. Angel’s sexual deviancies and sado-masochistic desires also come off as more of a Hollywood/pornographic trope than as a real person. Gullick overcomes these would-be shortfalls, however, with plot twists that slowly build and eventually crash down on the reader. The narrator’s quippy rhetoric and general infallibility is ultimately upended and an eerie impression of uncertainty remains.

Cherub Valley feels like a cyber version of Michel Houellebecq’s infamous novel Whatever; there’s a steady stream of discomfort that makes you want to continue. This notion is alluded to in the very beginning of the book with a quote from Spinoza: “Desire which arises from reason can have no excess.”

Toward story’s climax, the protagonist says: “The virtual community is the current prediction; conurbations of wealth-participants separated absolutely from the shanty towns of the sub-rich. An individual will have either all the money in the world or none,” indicating that he and his coterie will be the only ones able to maintain some semblance of independence in a world of unprecedented wealth and power consolidation. Though this seems generally true — especially when looked at through the lens of our current zeitgeist — will he be able to overcome those already further ahead of the curve?