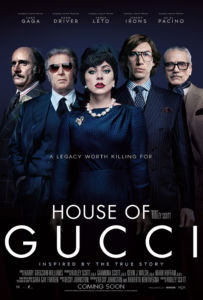 House of Gucci is a highly entertaining combination of comedy, tragedy, and farce, tracing the decline of the Gucci fashion empire from an Italian family business to a global capitalist brand.

House of Gucci would have been the best Martin Scorsese movie in years — if it hadn’t been directed by Ridley Scott. It has all the Scorsese touches: lots of Italians (albeit Italian-Italians rather than Italian-Americans), a plush running time, studies of characters who are seldom admirable but always interesting, excellent acting from a distinguished cast, Al Pacino, and a meticulous, nostalgia-infused reconstruction of another era, this time the late 1970s to the mid-1990s, a time that seems impossibly glamorous, wholesome, and white compared with the present.

Gucci was founded by Guccio Gucci in 1921 and passed on to his sons upon his death in 1953. The film considerably simplifies the Gucci family tree, focusing on two of Guccio’s sons, Rodolfo (Jeremy Irons) and Aldo (Al Pacino), plus Rodolfo’s son Maurizio (Adam Driver) and Aldo’s son Paulo (an unrecognizable Jared Leto).

Maurizio is depicted as a nerd who is targeted for seduction and marriage by Patrizia Reggiani. Brilliantly portrayed by Lady Gaga, Patrizia is a social climber from a less wealthy, less distinguished background. Rodolfo dismisses her as a gold-digger, but she wasn’t. She stayed with Maurizio even after his father cut him off. But she really was a social climber with a whole cluster of personality disorders. At first, her ambition and lack of scruples served her husband well. She had a child and helped reconcile Maurizio with his father just in time to collect his inheritance. This guaranteed her enormous wealth and prestige. She enjoyed a lavish lifestyle that is only hinted at in the movie.

But Patrizia could not leave well enough alone. She egged her husband on to take a role in the company. Why in God’s name would you want to run a company if you are not cut out for it, especially if you already have more money than you could spend in two lifetimes? (When Maurizio Gucci died in 1995, his estate was worth $400 million.) Then Patrizia created a conflict between Maurizio and his uncle Aldo, allying with Aldo’s idiot son Paulo. Aldo eventually ended up in jail for tax evasion. Then Patrizia turned on Paulo, first urging him to pursue his own design work, then hitting him with a cease and desist for using the family name. Eventually, Maurizio went into business with some shady Iraqis who bought Aldo and Paulo out of the company. Once in charge, Maurizio proved to be a terrible businessman. He cut back on profitable but down-market product lines while expensing his increasingly lavish lifestyle to the company. Eventually, he was forced to sell his shares, leaving the business Gucci in name only.

Patrizia turned Maurizio from a tongue-tied nerd and wallflower to a self-confident jerk. But he resented her interference in his family. He also found her social-climbing increasingly grating. This is beautifully depicted in a scene in Switzerland where Patrizia is reduced to gibbering insecurity by Maurizio’s old-moneyed school chums. Finally, Maurizio turned his new-found self-confidence against Patrizia, first separating from her then divorcing. He soon discovered, however, that there’s only one thing worse than a scheming wife working “for” him — namely a scheming ex-wife working against him. If you don’t already know the story, I won’t spoil it for you.

House of Gucci most resembles Scorsese’s Casino, in which a quasi-autistic nerd marries a femme fatale, although in Casino the villainess is a junkie and petty grifter, whereas in House of Gucci, she is the crazy ex-girlfriend from hell.

House of Gucci is great filmmaking that does not insult the intelligence, taste, or identity of white filmgoers. There are no politically correct messages. There is no tendentious “diversity” casting. House of Gucci is Ridley Scott’s best movie since Alien: Covenant and one of the best movies of 2021. I recommend it highly.