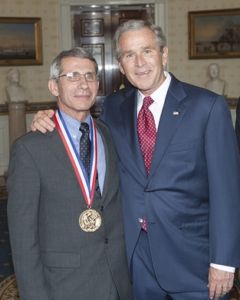 Anthony Fauci, the much less funny new incarnation of “Dr. Science,” with an unintentionally hilarious President.

The New Year is upon us and so is the tradition of making resolutions to be done with bad habits. I kicked my bad habit of listening to National Public Radio (NPR) long ago after concluding — being the slow learner that I am — that NPR functioned as a propaganda arm of the Democrat Party. Its target audience is the affluent, Prius-driving, “progressive type”; its voice, when I used to listen to it, a choir of feminist-activist busybodies: Linda Wertheimer, Susan Stamberg, Nina Totenberg, and the intrepid Cokie Roberts. Collectively, they confirmed H. L. Mencken’s sally: “No woman is really humble; she is merely politic.”

I must add that Cokie Roberts, in full conformity with the mainstream media’s journalistic ethics, coauthored with her husband a hit piece on Donald Trump in 2016. It was on behalf of what they called “the rational wing” of the Republican Party — “rational” meaning, perennially eager to serve as controlled opposition for the Democrat party.

“[Trump] is one of the least qualified candidates ever to make a serious run for the presidency,” Roberts and her husband wrote. “If he is nominated by a major party — let alone elected — the reputation of the United States would suffer a devastating blow around the world.” Not original, but those enlightened folks who populate the DC Beltway bubble, then in panic-mode, needed to show solidarity against the rude interloper threatening to crash their invitation-only party in the upcoming election, aka the coronation of Hillary Clinton.

Upon her death at the age of 75 in 2019, Barack and Michelle Obama called Roberts “a constant over 40 years of a shifting media landscape and changing world, informing voters about the issues of our time . . .” Nancy Pelosi: “Roberts’ death was “a great official loss for our nation and a deep personal loss for all who were blessed to call Cokie a friend.” Former President George W. Bush and his wife, Laura, “called Roberts a talented, tough and fair reporter.”

There you have it: fulsome tributes from the grandees for one of their favorite courtiers, one with a long career devoted to selling the fiction that the privileged, “important” people standing far above us, the demos, were exactly where they deserved to be. You can understand why they felt “blessed” to call her “a friend.”

Unlike other non-profit media giants like the Associated Press, NPR was created by an act of a Democrat-controlled Congress and signed into law by — who else? — Lyndon Johnson. What could possibly go wrong? I prefer to think of NPR now as National Pravda Radio. It never disappoints.

According to Wikipedia, NPR member stations “are owned by government entities (often public universities”) — speaking of government-subsidized propaganda entities. Its funding comes from the feds (about 11%), grants, business entities, and foundations (billions from George Soros’ Open Society Foundations). Soros’ foundation is just one of a number of corporate/foundation contributors that decline to use on-air credits; best to keep the identities of the paymasters who call the tunes of the NPR fiddlers their little secret. NPR took some flak for taking money from Soros, but not to worry: “‘OSI Foundations met NPR’s qualification criteria for funders,’” said Dana David Rehm, NPR’s spokesperson. ‘They understood and accepted our terms — chief among them the prohibition of any effort to influence editorial decision making. Our acceptance of the grant was based on principles of independence and fairness, and we stand by it.’” It’s not clear what the “it” at the end of this last sentence refers to. No matter. If you can’t trust an NPR spokesperson, who can you trust? 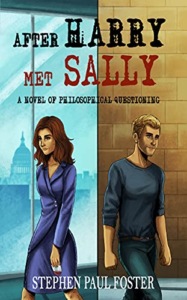 Still, one of NPR’s few worthwhile segments was the satirical Ask Dr. Science, produced by a troupe called Duck’s Breath Mystery Theater. It was composed of a straight man, a “concerned citizen” who would ask “Dr. Science,” a pompous blowhard, a question that would provoke a humorous, non sequitur monologue. The skit would always conclude with a “disclaimer” that he “is not a real doctor,” thereupon Dr. Science would chime in: “But I have a Master’s degree . . . in science!” It was a very clever parody of a staged interview with a “credentialed” pretender. The skit’s motto, “He knows more than you do,” completes the mockery of naïve listeners who are encouraged to trust the wisdom of any yahoo off the street who calls himself an “expert.”

“Dr. Science” no longer appears on NPR as a comedic character of Duck’s Breath Mystery Theater creation. In a remarkable, irony-charged illustration of life imitating art, “Dr. Science” has reemerged: a yahoo known as “Dr. Fauci.” This doctor, who “knows more than you do,” presents himself frequently on NPR – and everywhere else – with fawning interviewers, although with an immense pomposity and self-regard that is real rather than staged. I suppose in a way he can’t help himself. His swollen ego and assertions of omniscience are enabled by the mainstream media’s talking heads, who cannot seem to find enough superlatives to bestow on him. Here is NPR’s Terry Gross introducing him on the brink of her interview:

This is Fresh Air. I’m Terry Gross. My guest, Dr. Anthony Fauci, America’s top infectious disease expert, has become a hero to many Americans for his scientifically-based straight talk about the coronavirus. He became a medical celebrity during the press briefings from President Trump’s coronavirus task force, which Dr. Fauci served [sic] on.

Well, “top infectious disease expert,” “hero,” “medical celebrity,” “straight talker”: How does he manage to find a hat big enough to fit on his head after that? The Fresh Air host failed to mention that Fauci was 80 years old (now 81). Given that he hasn’t practiced medicine in decades, and given such an advanced age, presuming that he could still possess the high-level cognitive powers and the stamina required to stay competitive and current in the intensely technical, rapidly-developing fields of specialized medical research makes her “top…expert” claim laughable, if not an act of journalistic malpractice.

To complete the elevation of our “medical celebrity” to his throne as America’s Emperor of Public Health, Gross, by way of invidious comparison, then goes on for a bit to trash Donald Trump for being Donald Trump and, of course, anti-science. Dr. Science then takes the mic and leads off with,

Well, it was very clear what President Biden wanted [which is doubtful, since being “clear” is not how Joe Biden has ever distinguished himself], not only of me but of the entire medical team. And it was really very encouraging because he said it publicly and he said it privately to us, and that is that science was going to rule.

I think it was more likely that “privately,” Biden said, “Tony, since you’re going to rule, there must be, you know, a confidential way to get Hunter on your payroll. His science grades in that expensive, private high school I sent him to were above average.”

Robert F. Kennedy, Jr. has a different take on the “heroism” of Joe Biden’s Dr. Science than Terry Gross and the rest of the NPR sycophants who regularly imbibe Kool Aid from the publicity-hound Master. If only a quarter of Kennedy’s extensively-documented charges in his long book, The Real Dr. Fauci, are true, Fauci deserves to be put on trial for perjury, fraud, and corruption. The book is now a number one seller on Amazon. While understandably ignored for the most part by the mainstream media, Ron Unz has given it a lot of attention recently with three reviews, one of them quite long and available in an audio file. Think of RFK’s book as a kind of American samizdat publication now gaining an enormous popular readership, a work written to break through the mainstream media’s rigid control over what news gets covered and how its favored newsmakers are sanitized. Unz does mention a 4,000-word take-down piece on the Fauci book by six AP writers who did a smear on the author.

With the onset of the Covid crisis, Fauci quickly morphed into an unchallengeable authority on public health policy and, with the connivance of the mainstream media and the Democrats, has assumed dictatorial powers. He has unwittingly come to resemble the buffoon in NPR’s original Ask Dr. Science, since he presents himself as such for his interviewers.

In a recent Face the Nation interview, Fauci cried lèse-majesté and played his “my critics are anti-science” card with his version of the laugh-lines, “He knows more than you do” from the days of the original skit.

“Anybody who’s looking at this carefully realizes that there’s a distinct anti-science flavor to this, so if they get up and criticize science, nobody’s going to know what they’re talking about,” Fauci said. “But if they get up and really aim their bullets at Tony Fauci, well, people can recognize that there’s a person there, so it’s easy to criticize, but they’re really criticizing science because I represent science” (italics added). You get the point: “I have a Master’s degree in . . . science!”

Yes, he sees himself as a plenipotentiary “Dr. Science.” This doctor, however, is never funny. He is walking, talking proof that what the grandees call “our democracy” has gone completely off the rails. It’s long past time that this arrogant, octogenarian federal bureaucrat be toppled and held to account. Rand Paul and Ted Cruz are trying to move him out. Who else will step up?

« Lessons Nationalists Can Learn from the Hussites