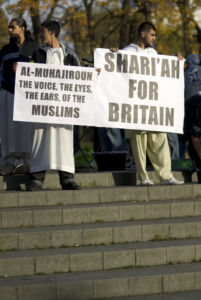 The UK being culturally enriched.

It’s a vital distinction in modern law, but it isn’t defined in any legal textbook or taught in any law school. It doesn’t need to be. If you’re a good person, you’ll understand and apply the distinction without being taught or told.

What is it? It’s the vital distinction between two categories of offense: a very serious category that we can call thought-crime, and a minor category that we can call flesh-crime. Murder, rape, and assault are flesh-crimes. They matter little and don’t threaten our vibrant democracy. Racism, anti-Semitism, and transphobia are thought-crimes. They matter greatly and are a huge threat to our vibrant democracy, which is why all organizations and institutions, public and private, must talk about and fight them incessantly.

A huge threat to democracy

Americans have seen the distinction between flesh-crime and thought-crime set out very clearly since the racist murder of the saintly George Floyd by a white policeman in May 2020. If murder mattered as such, the media would stress that blacks are far more likely to be killed by other blacks than by whites, let alone by white policemen. But murder is flesh-crime and doesn’t matter except when it is motivated by thought-crime. Floyd’s murder was certainly motivated by thought-crime, according to Leftism: It was racist. That made it far worse, and far more important, than the thousands of fraternal murders committed every year by blacks against each other.

Those are merely flesh-crimes, like the tens of thousands of rapes committed by blacks every year against white women. Consequently, the Leftist media quite rightly ignores the flesh-criminality of blacks and concentrates on the thought-criminality of whites. George Floyd’s murder was a teachable moment; an opportunity to emphasize the wickedness of whites and the saintliness of blacks. The riots that followed the murder further underlined the unimportance of flesh-crime.

Indeed, flesh-crime in pursuit of racial justice is no crime at all. That’s why so many members of Black Lives Matter and antifa remain unprosecuted and unpunished for violence, arson, and theft. Flesh-crimes only matter when they are committed by thought-criminals. That Leftist principle was in fact first set out by Saint Paul, a Jew, in the New Testament: “Unto the pure all things are pure: but unto them that are defiled and unbelieving is nothing pure; but even their mind and conscience is defiled” (Titus, 1:15).

If you are an opponent or victim of thought-crime, you are pure and “all things are pure” unto you. Leftists tirelessly apply that principle in Britain, too, as they guide us towards multi-racial paradise. We’d be there already, if it weren’t for whites and their racist thought-crimes. That is the message of the martyr-cult of Stephen Lawrence, the black youth who was murdered by a gang of white racists in 1992. As in America, blacks in Britain are killed far more often by other blacks than by whites, but black-on-black murder is merely flesh-crime. Stephen Lawrence’s murder was motivated by thought-crime, which is why we have an annual Stephen Lawrence Day to meditate on black sanctity and white sin.

The distinction between flesh-crime and thought-crime is also being underlined in the current scandal about racism at Yorkshire County Cricket Club. A Pakistani cricketer named Azeem Rafiq was subjected to “racial harassment and bullying” while playing for the club. For example, he was called a “Paki.” The national media are treating Rafiq’s torment as very serious and important news, keeping it in the headlines as they push for Yorkshire to issue a grovelling apology. After all, what happened to Azeem Rafiq was thought-crime, and thought-crime matters hugely.

Meanwhile, the county of Yorkshire remains what it has been for decades: the scene of extensive flesh-crime committed by Pakistanis against whites. Although the small town of Rotherham is now infamous around the world for the activities of its Pakistani Muslim rape-gangs, Rotherham is exactly that: a small town. Pakistanis have done far worse in near-by cities like Leeds and Bradford, but Leftist media like the BBC and The Guardian are not interested. When the Guardian uses the term “Yorkshire’s shame,” it’s referring to a grown man being called a “Paki” at a cricket club, not to the organized rape and prostitution of tens of thousands of white women and girls over many decades.

Sycophancy for Jews, severity for whites

After all, what’s shameful about rape and child prostitution? They’re only flesh-crimes and don’t matter when set against the horrors endured by Azeem Rafiq at the Yorkshire Cricket Club. How could any decent person worry about white children being raped when a brown-skinned Pakistani is being called a “Paki” somewhere — or is even at risk, however remote, of being called a “Paki”?

Sajid Javid, the Pakistani-Muslim politician who still hopes to become British Prime Minister one day, certainly isn’t worried about such things. When he was Home Secretary, he made some efforts to address the huge over-representation of “Asians” (that is, Muslims) in the rape-gang industry, but his efforts foundered on the Leftism of the Home Office. Perhaps Javid was too busy making sycophantic speeches to his Jewish backers at the Conservative Friends of Israel (CFI). But now that he’s Health Secretary, Javid has spoken out loud and clear on the scandal at Yorkshire Cricket Club. Javid is in the so-called Conservative Party, but his comments are, of course, designed to support and strengthen Leftism. He has tweeted that “‘Paki’ is not banter. Heads should roll at Yorkshire CCC [County Cricket Club]. If [the England and Wales Cricket Board] doesn’t take action it’s not fit for purpose.”

But it’s not only flesh-crimes against whites that decent people must ignore in Yorkshire. More than half of Pakistani adults there (and elsewhere) are in “close-kin marriages,” ensuring a steady supply of fascinating and formerly rare genetic diseases for local hospitals to treat at huge expense. Such in-breeding causes huge and unnecessary suffering for large numbers of children, lowering IQ and life-expectancy both in Pakistan and all Western nations enriched by Pakistani migration.

As a Health Secretary of “Pakistani Muslim heritage,” Sajid Javid has an excellent opportunity to speak out against cousin marriages. After all, it would be hard to accuse him of racism or Islamophobia. But what do the lives and money wasted by cousin marriages matter when set beside Azeem Rafiq being called a “Paki”? No, I predict that Javid will never start any kind of campaign against cousin marriages — but he will ally himself with Leftism again and make lots more sycophantic speeches to the CFI.

Javid knows the principle that governs the modern West: thought-crime matters, flesh-crime doesn’t. As the Leftist media campaigns against the thought-crimes of Yorkshire whites while ignoring the flesh-crimes of Pakistani rape-gangs, they are demanding that Yorkshire’s cricket-team better “represent” the “diversity” of the county. But that “diversity” was imposed on an unwilling white population who neither requested nor voted for mass immigration by Pakistanis and other non-whites. The so-called “scandal” at Yorkshire County Cricket Club is one minor example of the conflict caused by mass immigration. Far worse examples of the conflict are ignored by the Leftist media because they reveal that Pakistani Muslims, although still a minority in Yorkshire, are doing far more harm to whites than whites are doing to them. In their hysterical and hyperbolic coverage of “Yorkshire’s shame,” Leftists are inciting Pakistani Muslims to do even more harm to whites.

But that’s a general tactic of Leftists throughout the West: They incite non-whites to do even more harm to whites. What non-whites do is flesh-crime: rape, murder, assault. Those things don’t matter when set against the thought-crimes of whites: racism, xenophobia, and the desire to live free of non-whites and their flesh-crimes. So remember that vital distinction: thought-crime matters, flesh-crime doesn’t.

And if you’re a thought-criminal, Leftists will laugh when they see you chopped up.