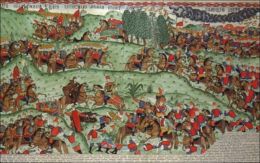 Kyle Rittenhouse was found not guilty on all charges after the highly-publicized trial regarding the shooting of three antifa terrorists in Kenosha, Wisconsin during last year’s riot season. Here’s a good place to get the facts. And if you’re a seasoned dissident, you’ve probably also heard of the Jogger trial in Georgia and the Charlottesville trial, but for the sake of the newcomer, let’s briefly recap what we know about those two proceedings.

In a magical time known as February 2020, a black criminal by the name of Armed Robbery (sometimes erroneously spelled Ahmaud Arbery) went into a construction site in Brunswick, Georgia with the intent to steal. He was wearing work boots at the time, but the media has claimed he was merely out jogging. This was Armed Robbery’s go-to cover story while he was stealing from other construction sites or casing them, and thus he was known to the locals as “The Jogger.” He was spotted by Travis and Gregory McMichael, a father and son crime-stopping duo who attempted to apprehend him. Gregory McMichael, a retired policeman, recognized Armed Robbery as a habitual criminal from back in the day. Armed Robbery, being gifted with the intelligence and impulse control typical of American blacks, attempted to grab a shotgun out of Travis McMichael’s arms. In the ensuing struggle, the weapon was discharged three times into Armed Robbery’s body, thus putting a premature stop to his budding criminal career. The two men are now on trial for murder. At the time of writing, the proceedings are nearly finished.

As for the Charlottesville trial, the case is surrounded by so much fake news and media propaganda that if you’re a newcomer to it, you might have to read some of the articles we have on that unfortunate event here on Counter-Currents just so you’ll be able to follow my argumentation. In short, some of the people who are considered to have been the organizers of the rally are now facing a civil suit, and you can hears the details of those proceedings here. In short, Roberta Kaplan, the she-Jew lawyer leading the charge against them, gave the game away when she claimed that the point of the civil case is not to redress grievances or to win compensation for the injured plaintiffs, but to “prevent the defendants from ever organizing again” — apparently because they are racist, which translates to stripping these people of their right to speak, protest, peaceably assemble, and petition for a redress of grievances. In short, it targets the first amendment rights of Jason Kessler and others in particular, and white identitarians in general.

The not guilty verdict in the Rittenhouse trial means that if the slaughter is to come, it can now only come piecemeal. But first, let’s take a detour into the realm of battle tactics – specifically, the Mongol tactic of encirclement and opening. Surrounding an enemy is often a harbinger of victory in battle. Because he now has to contend with threats from every side, he is far more vulnerable and the attacker can strike at his back and sides. However, a surrounded enemy knows he has no hope of escape outside of punching a hole through the encircling army. Therefore, surrounded men tend to fight like lions and will often inflict gruesome casualties on their encirclers. To this end, whenever the Mongols surrounded an enemy and deemed him desperate enough, they’d create an opening in their ranks, and the surrounded enemy, desperate to escape, would dart for that opening and were then slaughtered as they ran. Without that crucial opening, Mongol victories would have been hard-won. The Mongols aren’t the only ones who mastered this art of encirclement and opening; it is a popular means of disposing of enemies. The Mongols learned it from herding animals on the steppes. And what is true for physical space is sometimes true for conceptual and political space.

Today, white people in America are surrounded. Their ranks are closing. Decades of anti-white hatred have come to a head, and pretty soon, anti-white hatred will boil over into systemic anti-white oppression, culminating with the legalization of murder insofar as the victim is white. Already, the state of Oregon is working on making the rape of white women by blacks legal. The enemy armies now surround white America, and white America reaches deep within itself to find the will necessary to carve a bloody path out of the maneuver.

I’ve often seen it claimed that “the entire system” wanted to convict Kyle Rittenhouse. This is false. Kyle Rittenhouse was supported by the pond scum calling themselves conservatives, the controlled opposition whose role is to drive panicked American whites into the gap where they are to be slaughtered. Witness here how a humanoid slime mold calling himself Stephen L. Miller (no relation to Trump’s guy) defends Kyle Rittenhouse by claiming that the media ignores “apparent and actual white supremacy and racial profiling in the Arbery case.” The slime mold writes for National Review and FOX News, which are known controlled opposition outfits, so we can reasonably say his is the view held by the conservative establishment. And if those people want you to go there, you definitely don’t want to go there.

A victory for globohomo in the Sines v. Kessler trial would mean that anyone organizing rallies of protests would be found liable for any damages whatsoever that occurred during said rallies. This is already being practiced by local authorities when they demand that organizers of such events have insurance (and conveniently, insurance companies do not sell to “white supremacists”). It would mean the end of public demonstrations not only for identitarians, but also for other conservative causes as well for as long as antifa or the counterintelligence State could provoke or instigate violence at these rallies. It would mean the end of the right to protest, to peacefully assemble, and to speak out for white people in America. A victory for globohomo in the McMichael trial in Georgia would mean an end of white people’s right to defend their communities from black crime, effectively legalizing black crime even in the suburbs.

The two flanks are cut off, but there’s hope. If one is a white — or white-presenting — man, and the people assaulting you are not black, and if there’s copious video evidence that you were acting in self-defense, and if Conservative Inc. takes your side, and provided that you have absolutely no racism whatsoever in your past (racism as defined by the woke Left, by the way), then you get to walk away with only the media shitshow rather than a media shitshow and a criminal conviction. Hope springs eternal, and so white America celebrates. If we’re not racist, and if it’s all caught on camera from multiple angles, then we get to live — maybe as slaves, and maybe not safe from black predation, but we get to live, and we get to post based memes about based Kyle.

If the courts find for the defendants in Sines v. Kessler and in the McMichael trial, the encirclement maneuver will have failed, as the gap left would be too large to commence a slaughter. With self-defense, defense of community, and right to peaceably assemble and protest affirmed by judicial precedent, the fight is not lost in America and we gain valuable time to keep organizing. But if the courts find for globohomo in those two cases while finding Kyle Rittenhouse not guilty, then what will happen is a rout among white Americans as they rush for the exit indicated safe by the enemy – an anti-racist, part-Hispanic normie conservatarian posting snake memes and claiming it’s not about race and supporting BLM. Yes, Kyle cucked. We should have seen it coming. All the controlled opposition toadies are trying to drive white Americans towards the gap in the enemy ranks, the one place where opposition to globohomo is tolerated. Race-blind, individualist cuckservatism is more concerned with “owning the libs” than with defeating the enemy. And thus the great energy and will which American whites mustered for their defense and survival will be spent electing stool samples like Glenn Youngkin.

I’m not insisting that this must be planned. It doesn’t have to be. The way the American political system is set up, with its controlled opposition institutions (many of which do not know they are controlled opposition), all the mainstream Right has to do to fulfill this role is to follow their political instincts, which means co-opting Right-wing energies, pumping them out of the system, and then implement the agenda their donors want, spinning this as “owning the libs.” And unfortunately, this works. The Mongols weren’t fools. America’s rulers are fools, but they’re ruling over a population which can probably be fooled many times before it has enough.

Not all is lost, however. The encirclement and opening maneuver requires discipline and patience to pull off. Fortunately for us, the enemy’s armies include psychotic black Soundcloud-rapping sex offenders hopped up on anti-white hate. On November 21, child pimp Darrell Brooks plowed his SUV into a Christmas parade in Waukesha, Wisconsin. Though the press will doubtless deny it, it was an anti-white terrorist attack, likely motivated by the Rittenhouse verdict. Five people were killed and 40 injured in the attack.

Horrible though it may be (and it is, just look at this video), it serves as a wake-up call to any white people who may have thought the gap opened in the enemy ranks by the Rittenhouse acquittal offered hope for survival under the existing system. The lack of discipline in the enemy’s ranks is an opportunity for us. The controlled opposition — which now sadly includes Kyle Rittenhouse — would like us to believe this is not a racial conflict.

» “It Sounds Possible that the Revolution Has Started in Wisconsin”