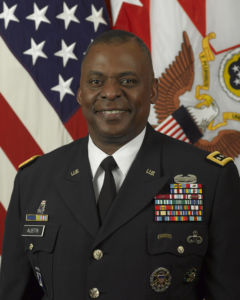 US Secretary of Defense Lloyd Austin

We are now nearly a year into Senile Joe’s presidency, and something highly alarming has already happened: America has lost its power to deter. “Deterrence,” writes Victor Davis Hanson [2], “is the ancient ability to scare somebody off from hurting you, your friends, or your interests — without a major war.”

The Russians — not “the Russians” who hack elections, but the real live sons of Czar Alexander’s valiant army — are carrying out considerable military activity in Eastern Europe [3]. This action appears to be the coordinated workings of a well-led, well-oiled Russian military apparatus. It has all the makings of a big disaster.

Should it become a disaster, the lion’s share of the blame needs to rest firmly on America’s organized Jewish community, the American media, the Democratic Party, and the Biden regime.

Victor Davis Hanson goes on to write, “[Deterrence is] an easily understood concept in the abstract. But [it] still remains a mystical quality in the concrete since it is only acquired with difficulty and yet easily forfeited.” It is clear that in Ukraine at least, the United States and NATO have failed to achieve deterrence. Let’s look at what Russia has done to actively shape the diplomatic and strategic environment in Eastern Europe.

Shortly after Senile Joe usurped the presidency, there was a cyber-attack on a major American pipeline that the US government was unable to prevent or undo. To clear up the mess, the Biden regime ceased blocking development of the Nord Stream 2 Pipeline that will deliver oil directly from Russia to Germany. If one takes the perspective of a NATO/EU supporter, this was a diplomatic train-wreck. The Nord Stream 2 Pipeline deal is analogous to the Molotov-Ribbentrop Pact or the earlier partitioning of Poland in 1795. Russia has now won over Germany, to a degree. This is to Poland’s detriment.

The government of Belarus, which is allied with Russia, has threatened Poland with Greenmarchers [4]. Belarus has gathered thousands of Third World migrants and massed them along the border. Johannes Scharf ably documented [5] Belarus’ staging of sub-Saharan Congoids for this move for Counter-Currents last month.

These Greenmarchers are now a genuine threat, and British and Polish troops are hastily building fences and barriers to prevent a brown tide from overwhelming the eastern borders of the European Union. At the same time, Russian military assets are massing near Ukraine [6].

The American loss of deterrence, part 1: the Jewish Deep State

America’s negative impact on this sordid mess starts when its government allowed NATO to expand into Eastern Europe. While it is certainly in the interests of Germany to be in alliance with Poland and the other parts of the former Austro-Hungarian Empire, it is most certainly irrelevant at best to NATO’s key backer, the United States. For America, the further east into Europe the alliance goes, the greater the danger and the fewer the benefits.

The next problem is the utter disconnect between the American foreign policy establishment’s designs in Eastern Europe and the interests of Americans — white Americans in particular.

To put it plainly, there are too many ethnonationalist Jews in the American foreign policy establishment. These ethnonationalist Jews are motivated to use American resources against Russia out of a sense of tribal grievance. It is not unreasonable to presume that many of them think that they are avenging the Russians for the pogroms in the musical Fiddler on the Roof.

Quite possibly nothing could have led to a loss of deterrence in Eastern Europe more than the first impeachment [7] of Donald Trump. The entire affair was a Jewish-driven optics disaster of sneering and contempt alongside demonstrated disloyalty on the part of a Jewish active-duty military officer. At the end of the impeachment proceedings, Trump lost no supporters, the Ukrainian government was shown to be corrupt and dysfunctional, the Biden family looked like crooks, and the Deep State looked like self-absorbed fools.

The most significant event to come from the first impeachment was a considerable unraveling of the relationship between American Evangelical Protestants and Jews. Florida Pastor Rick Wiles called the impeachment a “Jew coup [8].” This is a remarkable development that has begun to overturn decades of philo-Semitism in American Christianity.

You can buy Greg Johnson’s The Year America Died here. [10]

Without a doubt, the Biden administration sustained a considerable wound on election night. The vote was obviously rigged. That fact is now part of the national conversation. This was mentioned in a syndicated Associated Press [11] article after the 2021 off-year elections:

Election experts say even a smooth election cycle [in 2021] is unlikely to curb the distrust that has built up over the last year within a segment of the public. That skepticism has led to costly and time-consuming partisan ballot reviews, threats to election officials and new voting restrictions in Republican-controlled states.

Besides Biden’s electoral illegitimacy is his obvious physical and mental decline. The Russians moved into Eastern Europe in the wake of a calamitous presidential visit to Europe. Biden fell asleep at an inappropriate time during a summit and then cut a “long fart [12]” during a conversation with British royal Camilla Parker Bowles, the Duchess of Cornwall.

The fact that this fart story is out there at all is significant. Breaking wind is a normal human activity and shouldn’t be newsworthy. Additionally, British royals are very careful in their statements. The fact that Camilla Parker Bowles said anything about it is likely a deliberate hint on the Royal Family’s part that things are amiss with Senile Joe. After the “long fart” incident, rumors swirled that the President had accidently defecated in his pants during a visit with the Pope. For a time in November 2021, “Poopy Pants Biden [13]” trended on Twitter. The suspicion that Biden isn’t up for the job continues to build.

All of this occurs in the teeth of popular hostility towards Biden. Everywhere in America the President goes, he is met by hundreds of ordinary Americans holding vulgar anti-Biden signs and flags. Even sporting events have massive audiences chanting anti-Biden slogans. Should there be a disaster, it is highly unlikely that the public will “rally” to support this Chief Executive. Senile Joe has little possibility of being George W. Bush on September 12, 2001.

The American loss of deterrence, part 3: the woke military

In the mid-1990s, just after the US Navy allowed women to serve at sea, I read a book (whose title I cannot remember) that argued it was only a matter of time before America lost a big war. The problem, the author argued, was that the structure that was now allowing women aboard combat ships had created intractable problems with military readiness and negative ripples that expanded outwards from there.

In the 1990s, US Navy ships became “love boats.” While there was plenty of consensual sex, there was also rape. Managing the sexual escapades became an issue. No major problems materialized in the 1990s, but by 2020, the rot had become noticeable. The USS Bonhomme Richard (LHD-6) caught fire on July 12, 2020. The crew first failed to notice that there was a fire, then failed to sound an alarm or fight the fire, and finally called the local fire department after the blaze was out of control. The alleged cause of the fire was an arson incident motivated by sexual jealousy among a junior enlisted member of the crew.

Then, Kabul fell in August 2021. In a matter of days, the Taliban undid the work of two decades of American and NATO involvement and capture billions in military equipment.

The root causes of Kabul’s fall began long before 2021, and were present even on 9/11. The same institutions that turned the Navy into the mediocre force it is today were put in place as early as the Eisenhower administration, when the Pentagon created the integrated service. African pathology cases now wear stripes — lots of stripes — and there is a culture of lying, fluff, and crime. Nobody could fix things in Afghanistan, because nobody can criticize sub-Saharan pathology.

Then, of course, the US Army failed to suppress the antifa/BLM riots and conducted a purge of anyone who criticized the Department of Defense’s woke policies. And then there was the appointment of Lloyd Austin as Secretary of Defense. He looks like Idi Amin, the foolish African who led Uganda poorly in its first years after decolonization. While this criticism might seem unfair, appearances matter, and in serious issues, the old ways still apply. It comes down to the demonstration of a lack of judgment. Furthermore, Austin is so intertwined in the “civil rights” narrative that he cannot possibly make reforms that will cause merit to matter again or suppress the next Congoid rebellion.

One would also think that they would consider some sort of direct-to-America charm offensive rather than have foreign Deep State scolds like Marie Yovanovitch alienate half of America by arguing for Ukrainian interests at an impeachment trial. Why haven’t the Ukrainians made a solid case for US involvement in their defense?

The answer is that they have no case. The nation is corrupt, far off, and crime-ridden. It’s so bad that bandits shoot up farmsteads there. It is also something of a commercial rival. Should its agribusiness become fully developed, its production may very well put every farmer out of business from Saskatchewan to south Texas. No member of the American majority has any obligation to Ukraine.

Should the Ukrainians get some sort of Russian whipping, I won’t care. I’d love to see Marie Yovanovitch, Alexander Vindman, and Adam Schiff cry over such Ukrainian troubles. Unfortunately, the tears of Ukraine’s Jewish supporters don’t equal the loss of the ability to deter. America is certainly not defenseless, but plenty of people are now willing to test its defenses. We are in for some tough days.