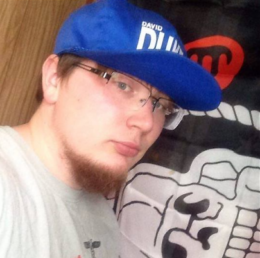 Be careful out there this week, guys: As the old saying goes, White Nationalists always die in threes. Or maybe I’m thinking of celebrities. I dunno. Either way, be careful, because over the weekend, news broke on social media about the passing of not one, but two Dissident Rightists. Both were deeply involved in the Alt Right circa 2017-2018, but had faded from public view in recent years.

First there was Alexander Blake Luderman, who went by the nom de guerre of Blake Lucca [2]. A Charlottesville veteran, Lucca was probably best known for being the host of the podcast Wolfman’s Activism and Entertainment, which debuted on the Radio Wehrwolf podcast network before briefly moving to TRS. He interviewed a diverse array of notable Dissident Right figures on it such as Jason Kessler, Vincent James, and Patrick Little. This occurred when TRS was at the height of its popularity, which would put Lucca in the top 1% of best-known White Nationalists. (I estimate that there are somewhere between 500,000 and 2 million people in the Dissident Right audience).

While a relatively minor player in the scene, Lucca was remarkably well-connected. In addition to his podcasting, Lucca also wrote for Identity Dixie and had connections to the Traditionalist Workers Party as well as Blood and Honor (the music promotion arm of Combat 18). 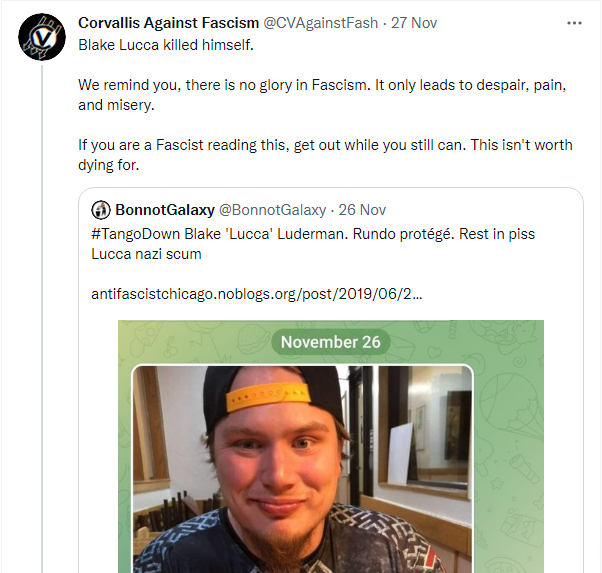 [5]Well, hell, antifa, what’s the suicide rate for transgenders like? I bet it’s a lot higher than for White Nationalists. Why don’t you go concern troll them? “We can connect you to detransition specialists. It’s not too late! Detransition before you kill yourself!”

Whether Lucca’s death was a suicide or not is unconfirmed, as far as I can tell. It appears that the origin of that rumor comes from an anonymous antifa account. The fact that the account claims they were “tipped off” implies inside info and that they did not hear it from the Right-wing internet sphere, because then they would have posted the screenshots. If this has been confirmed elsewhere, I have not seen it. 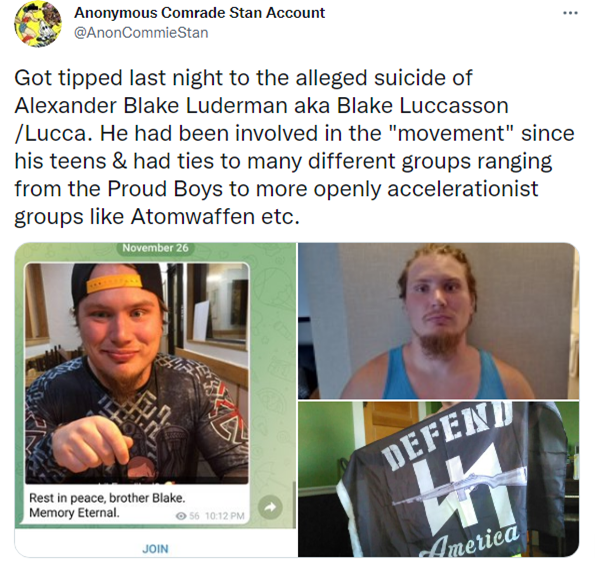 It is possible that antifa invented the suicide story for propaganda purposes, to say that becoming a White Nationalist caused Blake Lucca to become a social pariah, which in turn led to a downward spiral into depression and suicide.

That might be plausible if Lucca had been anonymous and then got doxed, but Lucca was fairly open — nay, flamboyant — about his political beliefs. He appeared to have a pretty high threshold for social disapproval, which seems inconsistent with the idea that he had a problem with becoming a social pariah. He wanted people to know his beliefs. The guy walked around in sonnenrad shirts, for Pete’s sake. 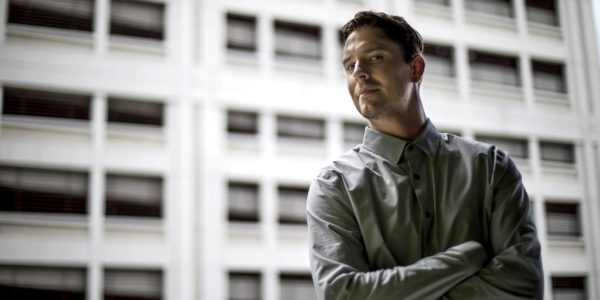 Then, on Sunday, the news broke on Twitter regarding the death [9] of Cameron Padgett [10]. Padgett is best known for booking Richard Spencer’s 2017-2018 speaking engagements. He was the man who organized Spencer’s appearances at Auburn University, the University of Florida, and Michigan State University.

You can buy The Alternative Right, ed. Greg Johnson, here [12]

Now, I’m not a fan of Richard Spencer, nor do I think Spencer’s speaking engagements were particularly effective at anything other than boosting his own dopamine levels. That said, Padgett was never a Spencer henchman per se. In fact, during interviews — at one time, he was getting a fair amount of press –, Padgett insisted that he was not even Alt Right, but rather a libertarian who was organizing Spencer’s speaking tour out of a principled devotion to free speech.

In an interview with The Tab [13], Padgett was asked, “So at what point in Richard Spencer’s career did you think, ‘Yeah, this is the guy I’m going throw my energy behind’?”

When he was just getting shut down. Antifa people were shutting him down, not letting him speak. I thought that was wrong. I think I would put my energy behind anyone else on campus who was trying to speak, anyway. It was almost impossible for him to speak after Texas A&M. I was reading a bunch of policies, and I realized he has every right to speak.

In an interview with Talking Points Memo [14], Padgett also said that he would “support someone who went up and said all white people are evil and should give money to all the minorities and give their land over,” if that person’s free speech was being suppressed. 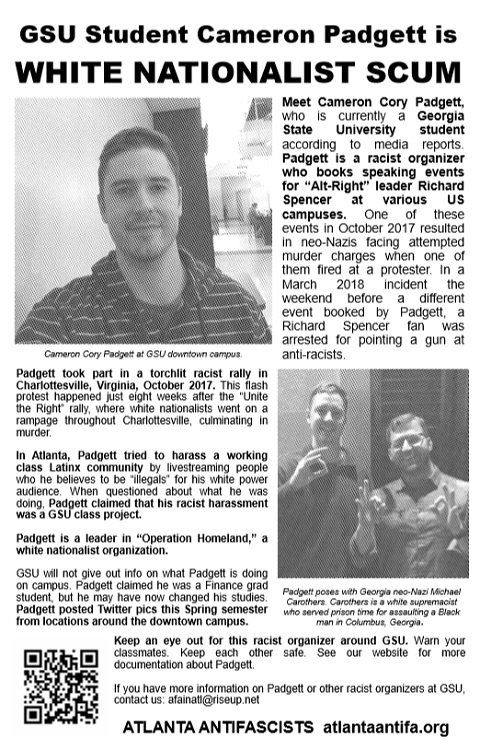 [15]The speaking engagements had one small utility besides keeping Spencer’s brain awash in delicious dopamine: His appearances forced the school to expend resources on security and legal fees. Padgett’s finest hour came when Auburn University attempted to cancel Spencer’s speaking engagement by citing safety concerns. Padgett, along with his attorney, Sam Dickson, sued the school, claiming this constituted a “heckler’s veto,” which is not a valid legal reason for suppressing speech. Auburn was forced to cough up $29,000 and allow the event to go forward. I like to think that as a result of Padgett’s actions that Auburn was unable to hire another secretary for their Chief Diversity Officer.

A similar thing happened at Michigan State University (MSU) when they tried to cancel Spencer’s appearance and Padgett sued again, this time with Kyle Bristow as his legal counsel. Again, MSU settled and begrudgingly allowed the event to go forward. The Florida speech likewise required the threat of a lawsuit in order to go ahead. Unfortunately, Spencer’s MSU appearance turned into a violent disaster and ended his speaking tour. The movement was going back to being exclusively online, and Spencer had put all his eggs in the “public figure” basket.

Around this time, Cameron Padgett began to fade from view, and it wasn’t until Sunday that I heard his name again.

Cameron Padgett died on Wednesday, November 24 at the age of 33. His cause of death has not been made public.

I did not know either Cameron Padgett or Blake Lucca. One of them I had never heard of until two days ago. They were both minor characters in the story of our movement. They were more than extras, but far from stars, and it appears that both of their involvements in the movement ended a while ago. Still, they stood in our ranks, and I felt compelled to write something about their passing.

It bothered me that I found out about both of their deaths from antifa, however. To antifa, there is no White Nationalist too small for them to care about. It is actually bizarre how much antifa will obsess over some of the most irrelevant people: teenagers posting pictures in front of flags, a few idiots you’ve never heard of in a chat room, complete randos — antifa care about all of them. 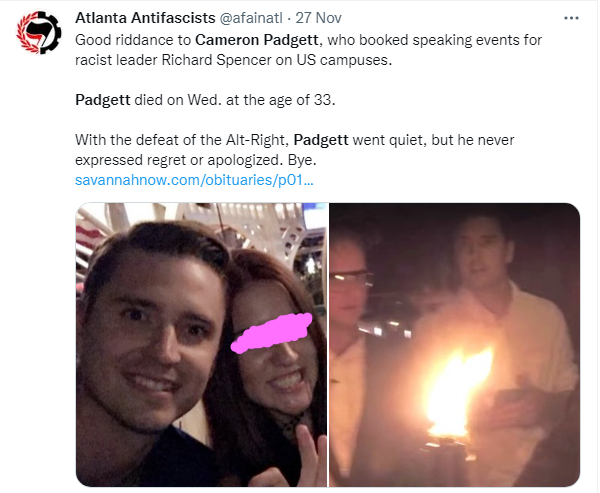 To antifa, the fact that Padgett had not been involved in White Nationalism for three years was no excuse not to break out the champagne bottles, and neither was Lucca too small for them to try to exploit his death for propaganda purposes. 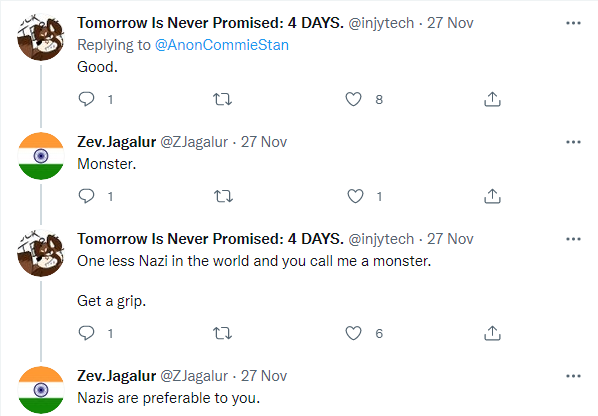 A major propaganda theme for Antifa runs something like this: “Nazis might pretend to be your friends, but they don’t actually have your back. They will turn on you at the drop of a hat. If you go to jail, no one will show up at your trial. No one will write to you in jail. If you die, no one will care, because they are not real friends. To Nazis, all you are is cannon fodder for their sick ideology.”

Thus, you have two people who put their lives and reputations on the line for The Cause to the extent that they could never have “normal” lives again. They died. Antifa acknowledges their passing, but the Dissident Right doesn’t. What does that suggest? I hate to say it, but if I were a casual outside observer, it would look an awful lot to me like antifa might have a point.

It’s bad optics — or rather, it’s like the Catholic concept of a “sin of omission,” which holds that you can sin by not saying or not doing something. You can say it’s bad optics of omission.

Of course, you might also say it’s bad optics for antifa to celebrate the deaths of White Nationalists as well — but that’s not my problem.

[18]I have been disappointed with how few people on the Dissident Right even acknowledged Lucca and Padgett’s passing. At the time of writing, the only people on Twitter who have acknowledged Padgett’s death are Hunter Wallace and Kyle Bristow. Richard Spencer has yet to comment on the death of the man who became a social pariah in order to put him on a stage. Nor am I aware of anyone involved in TRS acknowledging the death of one of their own podcast hosts. Bad optics, guys.

So I figured it might as well be me to say something. Again, I didn’t know either of them; l just want to acknowledge that these men existed. They stood up for white people in public, and for that, they should not be forgotten. 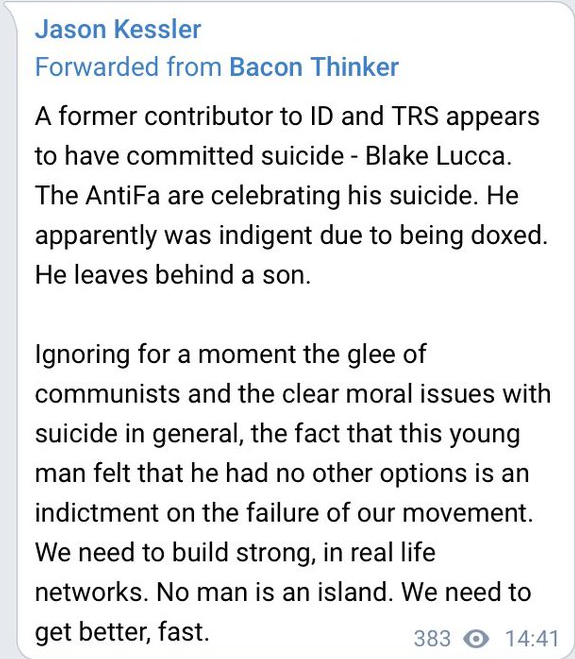 [20]If you are already behind the paywall and want to share the benefits, Counter-Currents also offers paywall gift subscriptions. We need just five things from you: