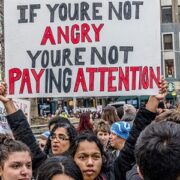 Sweet, sweet victory has been had, friends, but at much cost. And even so, it is not as sweet as it may seem. Kyle’s torment outside of prison aside, what has the world come to when the Right is forced to scrape the bottom of the barrel for something to celebrate? Kyle’s acquittal was not a victory, but simply the status quo being maintained. In a sane world, he would have never even been charged in the first place. Nevertheless, so much was on the line that a mere lack of a loss is seen as a win.

This reality paints a clear picture as to the Brazilification and subsequent South Africanization of America before our eyes. We cannot live side-by-side with these animals who make up the Democrat voting base, as one of our irreconcilable differences with them is that we want to live in a civilized society. These subhumans would rather us live in the mud as their ancestors have since “time immemorial.” The coping and seething on the Left in response to the Kenosha King being a free and very rich young man clearly illustrates this.

The Left rejects the very ideological building blocks of civilization itself, likely due to a spiritual and physical dysgenics and a high time preference, which is a major poison of late-stage civilization. In other words, they act like young children before they understand the concept of sharing, whose only concern is their daily hit of dopamine. The logical conclusion of this infantile value system has been achieved, and can be observed in Twitter orcs and their Twitter-berg masters. In contrast, our “ideology” of civilization, so taken for granted by us Westerners, is hardly an ideology but an ultimate, absolute truth that only sophists and their spellbound hordes could dismiss.

The first tenet of this ideology is the sacred and eternal right to self-defense. As all sane and rational people know, Kyle is and has always been innocent of any wrongdoing. These people attacked him, and he fought back with the proportional force available to him. The forces of chaos wish to reign unabated, and self-defense gets in their way. The result is an impotent rage and the wish to abolish this right that every civilized society must have to survive.

The Left, of course, know that they will be able to defend themselves under a “fortified” self-defense regime. This is no problem for them. Rather, the problem is our very existence. They wish to tear down civilization, but not have any of the physical risks associated with such an endeavor; not exactly reminiscent of Alaric, Ghengis Khan, Atilla, or Lenin, are they?

The ripple effects of the abolition of self-defense would be the complete destruction of civilization as we know it. The in-group, like a mob of black rioters during Katrina, would live high and wild for the first few days or weeks. However, once all the civilized conservatives flee, they will starve for want of food. This irrational hatred for the concept of white self-defense can only exist via savage high time preference or Semitic malice.

The self-defense issue is only one way in which these animals wish to tear down all that is of the natural order. Let us look at the black area of any inner city that has been completely abandoned. Although they were once-vibrant black economic zones, the abolition of white rule in the 1950s and ‘60s meant that the black self-destructive impulse was once again free to run amok. For seven decades, the worst of the blacks have worked diligently to destroy their own communities in a feral frenzy whenever one of their “brothas” is punished for acting out in a Sub-Saharan way. This is incompatible with a functional, let alone sophisticated, society.

These areas never come back to life. Why would they? Who wants to build a business that will get burnt to the ground by rabid anarchists? The talented one-tenth of blacks tried and simply gave up. The Koreans tried but learned the hard way about the viability of such economic ventures. Now who will build businesses for these people? Obviously no one, and so these roving bands of thugs destroy the nearest business districts in the vicinity: the suburbs. Thus, it is truly a head-scratcher why white flight is a nationwide phenomenon.

This destruction continues today and, in another anarchist platitude, the excuse given for it is that property is more valuable than life. This combines the anti-self-defense and pro-mindless destruction ideologies into one. Through this faulty logic, not only is it somehow okay to burn down your own city, but anyone who gets in the way is a murderer.

This is also an attack on the sacred and eternal right to private property, which only savage peoples are incapable of understanding. If vandals are able to destroy all in their path while property owners are simply supposed to flee for their lives, then civilization ends. Let’s not even give credence to the big-brained centrist take that property owners should call the police or other state security forces. Like many American cities, they didn’t lift a finger in Kenosha.

Here’s a hypothetical scenario: Let’s say Vienna is being besieged by the Ottomans. Now let’s say that the Viennese, and indeed all Christian peoples, have become pacifists and are thus unable to defend their lands. What would happen to Western civilization? Obviously, Sulieman the Magnificent will make Ghengis Khan look like an amateur in how quickly he will conquer Christendom. Perhaps there would be less bloodshed, or perhaps not. But even if it were to save millions of lives, one wonders if those lives would be worth living. The pain of deterrence must always be a factor in a civilized society.

It seems that the forces of chaos are unable to see the value in such things. People often spend their entire lives building a business. It is almost like a child to them. It is an extension of them. Whites build, and sadly it is usually the lowest elements of the black community and their race-traitor lackeys who destroy. Of course, a hood rat whose entire life has been paid for by the taxpayer knows nothing about how property insurance works or how much time goes into starting a small business without (((banking connections))) and powerful friends. All he knows is “dat be whitey’s store.”

With the de facto abolition of private property, civilization ends, as cooperation becomes impossible. This is the main reason that black areas look like something out of a dystopian, post-apocalyptic science fiction film. The risk-reward calculation is simply not conducive for a rational person to invest in the hood. If it were, there would be thousands of investors trampling over each other in the auction houses hoping to scrounge up cheap and profitable properties for new enterprises. It has become clear to the enterprising that the only way to salvage black areas is to ethnically cleanse them via gentrification.

Blacks, in all their wisdom, are unable to see that property versus life is a false dichotomy. While life might be lost in the defense of such an important tenet of society, neither need be lost on any large scale. The right to self-defense and of private property work in tandem to protect lives and property. If property can be protected with deadly force, only the foolhardiest will attempt to destroy. If life can be protected with deadly force, the same applies. More lives and property will be saved. It is a rare case of a true best-of-both-worlds scenario. Everyone, blacks included, would be able to live a much better life by adhering to these absolute principles. Only the maliciously high time-preferenced could possibly find any disagreement with such a staple of reasonable logic. Only the maliciously low time-preferenced would want to manipulate these tendencies and empower the rabble, to the detriment of both blacks and whites.

These insights provide a startling sneak peek into America’s future. While we still technically have the right to self-defense, the right to protect private property is nevertheless completely gone in the US. Kyle may have won, but he was still bludgeoned by an abuse of the judicial process. I doubt many people want to gamble with having to endure a similar ordeal. The right to destroy while black or adjacent is also de facto legal, meaning that free enterprise outside of the mega-corporation cartel headed by Amazon is all but impossible near culturally-enriched areas. This will likely only continue to get worse as America’s inner cities continue to look increasingly reminiscent of South Africa, despite the Left’s kvetching about supposed “white supremacist” militia members now having the green light to mow down six million peaceful protestors.

We can celebrate Kyle’s freedom. God knows we deserve some good news. But we must never forget that the fight continues, and that we have only won a defensive struggle against the complete de jure elimination of the right to self-defense in America. From here, it will only get worse.

[3]If you are already behind the paywall and want to share the benefits, Counter-Currents also offers paywall gift subscriptions. We need just five things from you: