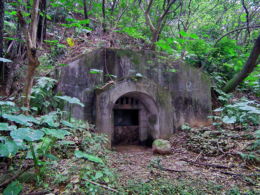 When I was in the middle of my teenage years, my cronies and I would tear around our southern English town on our bicycles, rickety machines partly constructed from old parts salvaged from the municipal rubbish tip. The last time I was in my home town, two years ago and aged 58, I walked around it and I found I still knew every alleyway, every park, every incline, every bit of pavement (as we Brits call sidewalks) that you could skip your bike up. There was not an inch of that town that me and my bicycle buddies didn’t know.

Except that there was.

It was a squat stone building by a park which looked too small for anyone except a dwarf to get into, and it had a green wooden door fastened with an ancient padlock. There was no indication as to what its purpose was, or had been. We would cycle past it and wonder, far too respectful (i.e., scared) of authority to kick the door in and investigate. Until someone did it for us. One day as we cruised by on our wonky bicycles, we saw the door had been smashed in. It was obviously essential that our little band of English Huckleberry Finns and Tom Sawyers investigate.

One of us had a bicycle lamp to use as a flashlight and in we went, nervous but excited. It looked like a small building from the outside but it wasn’t a building, except in the most literal sense. It was an entrance to an underground structure. We walked down stone steps, slippery with ancient moss, hearts thumping, and when the torchlight flashed onto the wall, they started thumping harder. There was a stenciled image of a face in a gas-mask in faded red paint. My friend said, “It’s an air–raid shelter.”

My home town took a few of the Luftwaffe’s bombs in the Second World War. There is still a local airport — used for gliding now — which was a target of Göring’s aerial campaign in 1940, as some of the Spitfires which took part in the Battle of Britain took off from there. As kids, we would cycle up and down the banks of what we called “bomb-holes,” the craters left by German materiel. We found an Iron Cross once. I don’t know what happened to that. These air-raid shelters (also known as “Anderson shelters”) were common in suburban London.

I remember the sense of excitement as we descended into this mysterious chamber in much the same way as I remember chancing across Counter-Currents years later, but years ago now. I remember what I felt: a sudden shock of recognition. I had been academically rather smug for many years, my Ph.D. behind me and with a sort of blasé confidence that somehow I had mastered Western thought. How wrong I was, and CC was as much a kick in the arse (or ass, as you prefer) as anything. The late, great Jonathan Bowden was one of many rich discoveries I made on this site, and he described it as an online university. Now, anyone of 18 years of age considering studying a humanities degree at an actual Western university would do far better to save their money and build a library from books promoted on and connected with CC, pausing only to send some of that saved money to the site.

I had never heard of Julius Evola, Savitri Devi, Jonathan Bowden, Tito Perdue, or Ernst von Salomon’s extraordinary novel It Cannot be Stormed. I was introduced to the work of Greg Johnson, Jim Goad, James J. O’Meara, Kerry Bolton, Michael Polignano, and many others. I read the work of Collin Cleary in a kind of daze, never having realized how close paganism is to beliefs of my own.

Sadly, there was nothing in the air-raid shelter all those years ago but rat-droppings. No tin helmets, gas masks, or dead Nazi pilots. Not even a tin of SPAM (a very English joke). Counter-Currents, however, is a very different kind of shelter, and it contains a treasure trove which can quite literally change your life and the direction of your thinking.

You must read new ideas. You have to. If not, you will be led by the nose for the rest of your life. If you do not swim against the stream, the way the West is flowing as I write, that tide will wash you away. Counter-Currents does not accept the dictates of the tides but sails against them.

I hate to come over as what British journalist Julie Burchill once called “amockalyptic” — i.e., ginning up doom and gloom just for kicks and clicks — but I don’t expect the next couple of years to be a walk in the park for the world in general, and the white West in particular, and you will need your wits about you. And wit (which is often described metaphorically as “razor-sharp”) is whetted on the leather strop of wisdom, which happens to be the currency in which Counter Currents trades.

Yes, there are some clashes of heads in the comments section, but if you are a dissident online conservative writer (you are unlikely to be one in the mainstream media) and you don’t have a thick skin, you may want to do something about that. It should be apparent by now that debate — the dialectic of disagreement and resolution — is what we on the Right do. We leave the ideological lockstep to the Left, and I firmly believe that, intellectually, speaking CC brings a gun to a knife-fight. I note with amusement that the Southern Poverty Law Center — a sort of metapolitical Addams Family — describe CC as being “academic” writing. Given that there are many qualified academics writing here, why the sneer quotes? When it comes to the goombahs of the SPLC, the ADL, and so on, I always think of the wonderful line delivered by Robert de Niro in Scorsese’s remake of Cape Fear: “I can out-run you, I can out-think you, and I can out-philosophize you.”

Counter-Currents is not confined to the rarified atmosphere of philosophical investigation, however, although you will find plenty of that here. It is a properly cultural site. Movies, comics, music, sport, art — all the elements in culture’s periodic table can be found discussed engagingly. Also — and this is missing from more centrist online sites and magazines that think they are a bit edgy — CC has balls. There is great stylistic writing here, but there is also confrontational, two-fisted prose that makes going back to the print media like listening to your favorite band and then entering an elevator and hearing piped muzak.

So, if you donate or subscribe to CC, it is not merely an act of philanthropic goodwill for a plucky website, but an investment in your own future and our collective chances of getting out of this collapsing coalmine alive. The Left are moving, and quickly. They aim to neuter the political internet (something I have blogged about for over a decade) because it is far too free for the elites’ liking; there is way too much liberty for the peasantry, and that is why CC is more than just a casual read for the intellectually curious. Someone, somewhere is scared of us. I have a friend who works for one of Britain’s — one of the world’s –most famous newspapers. He tells me he has to be very careful not to read CC at work.

The Left are doing everything they can to destroy white culture, like some poor, silly girl slicing her arm with a razor. Soon, crises will erupt for us across the West. They already are. Culturally speaking, for those on the political Right, there will be blitzkrieg. And Counter-Currents will be the closest thing we have to an air-raid shelter.

Full details about how to give are below.