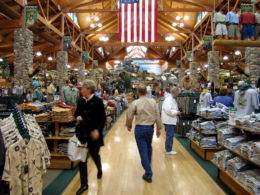 Richard Houck’s “7-11 Nationalism [2]” shows how diversity made friendly late-night forays into convenience stores impossible. No longer could whites socialize freely with each other in them as rising crime rates enabled by the champions of diversity made them unsafe places to hang out. The threat diversity poses to convenience stores goes beyond robbery: Many customers and clerks have lost their lives working in them recently.

While diversity has ruined many convenience stores, it has left one institution untouched: Cabela’s, a retail outlet in the United States that specializes in hunting gear. More specifically, half of its revenue comes from hunting gear and the rest comes from other outdoor equipment such as fishing gear, handguns, kayaks, and cooking grills. Cabela’s outlets are not your typical bare-walled big box stores, instead having a rustic wood finish, displays of giant taxidermic animals, man-made waterfalls, and little wooden shacks as dressing rooms.

I went to Cabela’s the other day because they have a wide selection of hiking boots. I noticed that most people I saw there were white. I decided to count any non-whites I saw. In all, there were 15 Hispanics, ten blacks, and four Asians — but I must have seen 300 whites. The few Hispanics I saw were the only ones who seemed to want to be there. The rest were just passing through.

Most of the blacks had a white spouse or foster parent with them. One exception was a black woman with a child. She was looking at the cooking grills. I also saw one strange mulatto guy who had a white girlfriend, but he may have just been an odd-looking white guy with a tan. In all, I saw no full-blooded adult black males in the entire place. I can see why. It would be like me going to a black barber shop. I’d feel out of place.

There was a cardboard advertisement showing a black guy hunting. I guess there may be some black guy in America who does it. Maybe. By and large, black men won’t hunt animals, but they’ll grill them and eat them as part of a cookout.

John Morris of Bass Pro Outdoor World bought Cabela’s in 2016, but Cabela’s outlets retain their original name. Bass Pro stores and Cabela’s stores are fundamentally the same. Altogether, there are 170 Cabela’s and Bass Pro locations [3] in the United States.

Morris hails from the Ozarks, a mountainous region of Missouri which serves as a hunting and fishing destination for many whites in the Midwest. He started Bass Pro out of the rear of his father’s liquor store, and is now a billionaire. A third of American billionaires are Jews, so there’s a good chance he’s one, too, but I couldn’t determine his religious or ethnic background.

There are many photos on the Internet of Morris fishing with George H. W. Bush. Morris looks like Bush, and is so often the case, people who look alike are friends. Morris appears to be a friend of not only H. W. but the entire Bush family. According to Open Secrets, Morris donated money to George W. Bush in 2000 and 2004 as well as to Jeb Bush in 2016.

Morris has also donated a lot of money to Republicans Kit Bond and Roy Blunt. For the record, Blunt voted against impeaching Trump. He also gave a comparably smaller sum to Donald Trump in 2020. Morris may not be a Trump Republican, but he is not a Never-Trumper, either.

Overall, Morris’s political donations haven’t exactly been good, but given that nine-tenths of the richest American billionaires donate to Democrats [6], he’s not so bad.

There may be a reason why Cabela’s stores feature ads showing black men hunting. In 2016, the Equal Employment Opportunity Commission (EEOC) filed a class action lawsuit [7] against Bass Pro, before it bought Cabela’s, for allegedly discriminating against black and Hispanic employees in its hiring practices. Almost none of the store’s clientele are black or Hispanic, and presumably few of its applicants would be, so I doubt Bass Pro was discriminating against them. It would be easier to live in an all-white country where minority issues like this wouldn’t be a problem.

John Morris should know that the more you give in to the Left’s demands, the more they want, so there’s no point in trying to appease them in the long run. However, billionaires usually think only in terms of their profits and not about the long-term survival of whites. Morris, by the way, is an avid conservationist, having donated $300 million to the cause. Could he be so kind as to donate that much to saving whites?

[8]To get an idea of just how white Cabela’s clientele was relative to other stores, I did a quick walk-through in a nearby mall, going into a few stores and past the food court area. I counted 55 whites and 108 non-whites, or 163 in total. Among the non-whites were plenty of blacks, Hispanics, and Asians. Thus, going to Cabela’s is one of the most implicitly white things someone can do in America. There were probably more dogs at Cabela’s than non-whites.

In fact, I overheard two white guys talking about their dogs. “I miss my dog,” one of them said. “He was a big black lab. A headache at times, but great.”

“Yeah, well she was a little crazy when she was younger, but she’s getting old now and slowing down,” said the other, referring to a pooch laying down by a set of boots I wanted to try on. I managed to grab the boots without the dog taking much notice. She was very well-behaved.

Cabela’s is for kids, too. Many children are fascinated by the fierce taxidermic lions, tigers, and bears. There were also a series of county fair-style games. Frank Raymond [9], an India Indian and a guest on Red Ice Radio [10], claims that whites cater more to children’s fun. This may be a genetic trait, or a product of the culture that has arisen since Rousseau wrote of the ideal innocence of childhood. Maybe it’s a little of both.

Cabela’s clientele differs from most crowds of white people. First, there are more nuclear families: mom, dad, and the kids. I saw two instances of a little blonde boy begging his dad for a toy and his father firmly telling him, “No.”

The men were mostly tall and robust, having broad shoulders and thick chests. One could say many were brawny “lumbersexuals.” Still others were skinny, wiry guys wearing baseball caps — the sort of guys one could imagine riding a dirt bike or quad. Collectively, they were more masculine than the average guy. Their beards and eyebrows were thick and dark. The men were mostly Gen Xers and younger boomers, but there were some millennials. This aligns well with data [11] showing that Cabela’s primary demographic is the 30-49 age group.

There weren’t many women. The few who were there dressed plainly, wearing hoodies and the like. Women dress for other women, not Cabela’s guys.

I’ve never felt much of anything at Cabela’s. What I mean to say is that I didn’t feel overly happy or sad. I was just doing my thing. One thing about white people is that they let you do your thing. They don’t bother you, and you don’t feel like you need to constantly check your behavior to fit in. It’s not like those urban-themed stores in the mall where the black clerks stare at or interact with you awkwardly. In contrast, white people intuitively understand each other, almost as though they can read each other’s minds up to a point. This saves time and allows them to work together more efficiently. It also permits more in-depth communication.

When I shop, I do so a little more thoroughly than most people. I must see the fabric percentages of the clothing and try things on. I don’t care about the brand name; I care about the look, fabric, and fit. This is the same as what I care about in politics: people should look white, have the right genetic ingredients, and have a society that fits them.

[12]If you are already behind the paywall and want to share the benefits, Counter-Currents also offers paywall gift subscriptions. We need just five things from you: