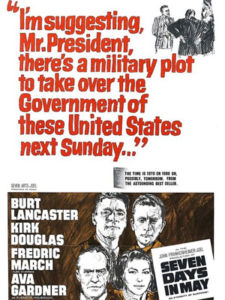 It is really easy to look back on the sensitive “Have you no decency, sir [3]?” liberals of the early 1960s and dismiss their concerns. After all, those well-dressed, well-groomed Democrats from America’s northeastern establishment are an easy target. Many of their heroes, like Alger Hiss, really were Communist spies. The “civil rights” movement they so virtuously supported ended up a disaster. They were all in for Kennedy’s Vietnam policy in the early 1960s, but a decade later they’d dodged service in Southeast Asia and were in tenured positions writing books about the folly of it all.

And yet it is a well-known proverb that a broken clock is right twice a day. One solid metapolitical work from the decent liberals of the early ‘60s is Seven Days in May. The movie was produced with a great deal of cooperation from the Kennedy administration. The opening scene was actually filmed outside the White House and several other scenes inside it. It is based on a 1962 techno-thriller novel of the same name.

The Kennedy administration [4] was so keen on getting the book filmed because they convinced themselves that they needed to embark on a crusade against a “Right-wing” military coup. No coup ever came, of course, and it would be easy to attribute their fear to the usual penchant of “civil rights” believers to misread data, but I’ve come to conclude that Kennedy did identify a genuine potential threat. All incoming political administrations need to watch this film, for the threat is now worse than in the early 1960s. And since Seven Days in May became a golden oldie that nobody watches, the Pentagon has grown into an out-of-control monster.

To explain JFK’s concerns, we need to go back to November 3, 1950. On that day, the Chinese intervened in the Korean War and the United Nations force — mostly made up of Americans and South Koreans, but there were others [5] — tumbled back in disarray from their positions near the Yalu River. The mad [6] bug out [7] was only a part of the problem, though. One of others was General Douglas MacArthur, and President Truman fired him because of it.

MacArthur’s firing had been a long time in coming. He’d effectively become the American emperor of Japan since 1945. His already extraordinary ego had grown to gigantic size. His headquarters staff was a crowd of sycophants who knocked off for cocktails around four in the afternoon every day. Truman and MacArthur held a tense meeting at Wake Island [8] in which MacArthur refused to salute the President and otherwise behaved as though he was himself a head of state.

President Eisenhower, the former Supreme Commander of Operation Overlord [9], had fewer problems with his senior military leaders, but in his farewell address he warned of a new threat he called the Military-Industrial Complex. He stated [10]:

We must never let the weight of this combination endanger our liberties or democratic processes. We should take nothing for granted only an alert and knowledgeable citizenry can compel the proper meshing of huge industrial and military machinery of defense with our peaceful methods and goals, so that security and liberty may prosper together.

JFK had two problem military men. The first was USAF General Curtis LeMay. He was an idol of the American Right and was openly critical of Kennedy following the catastrophic Bay of Pigs invasion. The second was Major General Edwin “Ted” Walker [11]. Walker was fired from his post by Kennedy after his pro-Blue anti-Communist metapolitical campaign became a hot news item. It was claimed that Walker’s information officer, Major Archibald Roberts [12], had distributed material from the John Birch Society, which scared the bejeezus out of the anti-anti-Communists [13] who made up part of Kennedy’s political base. (Kennedy himself was highly anti-Communist, though.) Walker ended up resigning his commission and ran for office as a Right-wing Democrat.

The rightness or wrongness of Kennedy and his so-called problem generals is irrelevant here, however. The important thing is that Kennedy felt politically threatened by them.

The film’s fictional President, Jordan Lyman, is excellently played by Frederic March. Lyman, who has a look of gravitas and wisdom, is how Kennedy’s supporters believed him to be (even though I’ve come to conclude that Kennedy was not the political genius that he is reputed to have been in the mainstream narrative).

Seven Days in May is tightly scripted, with outstanding cinematography. It is filmed in black and white, which in the early 1960s was a signal from Hollywood that the movie was serious and for adults. It stars Burt Lancaster as General James Mattoon Scott, the Chairman of the Joint Chiefs of Staff. Opposite Lancaster is Kirk Douglas as Colonel Jiggs Casey. President Lyman has two supporters, White House Chief of Staff Paul Girard (Martin Balsam) and Senator Ray Clark of Georgia (Edmond O’Brian).

The story is said to be set in May 1970, although the square and neat fashion styles belie the fact that it is in fact 1962, given the bell bottoms and shaggy hair that were commonplace by then. The plot skips over the Congressional midterms of that year, but the 1972 election is mentioned.

It begins with a riot between supporters of an arms reduction treaty and its opponents outside the White House. In the White House, Girard frets over President Lyman’s sinking poll numbers. The public is angry and worried about the treaty. This anger carries over into the US Senate. There, Senator Prentice (Whit Bissell), who wears the same style of eyeglasses that Senator Barry Goldwater wore, argues with Senator Clark over the treaty’s merits.

You can buy Greg Johnson’s The Year America Died here. [15]

Senator Prentice discusses the treaty with Colonel Casey at a cocktail party. We learn that the military establishment dislikes the treaty but that Colonel Casey is an apolitical military professional who supports the US Constitution. At this party we meet Eleanor Holbrook (Ava Gardner), a Washington socialite who is sexually involved with both General Scott and Colonel Casey.

Colonel Casey starts getting wind of curious goings-on involving a planned war alert that is set to take place with the President relocated to a secure bunker where he will be isolated, including from his staff and the press. The alert is just seven days away. He also learns that a secret military base has been set up near El Paso, Texas where a new unit, ECOMCON, has been deployed. Casey realizes that ECOMCON stands for “Emergency Communications Control” and is a unit made up of Signal Corps men. As part of the alert, they will deploy from the base to several large cities and secure a telecommunications hub in Utah.

The story continues to unfold with some cloak-and-dagger escapades, and eventually Senator Clark is detained at the secret base but escapes with the aid of a friendly officer. Meanwhile, Chief of Staff Girard meets with an Admiral in Gibraltar who admits there is a plot to pull off a military coup during the alert. Girard is killed in a plane crash on his way back with a signed confession, but not before hiding it in his metal cigarette holder.

President Lyman and General Scott eventually have a confrontation at the White House. The dialogue is well-done. Scott believes that the treaty will weaken the United States, while Lyman believes that it will make the US more secure by reducing tensions with its adversaries. Strangely, the President doesn’t fire General Scott outright, and instead asks for his resignation. Scott refuses.

Lyman is about to confront Scott with some incriminating letters he had written to Eleanor Holbrook and which were discovered by Colonel Casey, but decides otherwise, thus avoiding a dirty political trick. The confession Girard had secured in his cigarette case is recovered from the crash, thus making it possible for President Lyman to go on television with his evidence of the coup. The Chiefs of Staff start to resign and General Scott departs, stunned.

The stolen election of 2020 was very much like the coup described in Seven Days in May, with a few differences. The Biden coup was executed by means of election fraud with cooperation from the mainstream media. The media in turn blacked out Trump’s statements and he was eventually banned from Twitter. The military colluded in this by using lies and pointlessly deploying in one place while failing to deploy where they needed to be.

The military was a problem even prior to the 2020 election, however. After Trump came to office, many of the corrupt political elite he overthrew, such as Madeleine Albright, effectively called for a coup from the outset. I believe that a coup did eventually come. During the Trump years, the Pentagon lied about its troops in Syria to the President, thus embroiling Americans in a war they didn’t wish to wage. They held unnecessary war games in South Korea, making diplomacy with North Korea more difficult. The Pentagon also failed to protect ordinary Americans during the sub-Saharan/white mattoid George Floyd riots.

The military also colluded with the Speaker of the House to undermine the President’s constitutional authority. General Milley treacherously communicated with the Chinese [16] to undermine America’s position there even though his troops are currently being deployed in increasing numbers to the First Island Chain in the Indo-Pacific region — to counter China.

And today, they are failing to protect the US border.

The US Department of Defense: America’s foremost problem

Colin Powell set the existing climate for a military beyond civilian control during the “gays in the military” controversy of the 1990s [17]. It has only become worse since. General Wesley Clark – who claims to be Jewish — gave orders to attack the Russians [18] at the end of the Kosovo War in 1999, an action which would have started a terrible war. (He was quietly removed afterwards.) Obama likewise had problems with the Defense Department during his tenure.

There is never a time or place when the armed forces aren’t a threat to its own government. Lucius Cornelius Sulla took over Rome because he was the commander of a force of armed men. Historically, this threat has commonly been averted by having two armies. In India during the Raj, the British authorities employed the British Army as well as the British Indian Army. The former was made up of British soldiers equipped with the most advanced weaponry. The latter was made up of Indians and they were issued with more modest weapons and had fewer supports, such as heavy artillery. Likewise, in Saudi Arabia there is the Saudi Army and the Saudi Arabian National Guard (SANG). The Saudi Army accepts anyone into its ranks, including non-Saudi mercenaries. SANG, conversely, is only made up of Saudis from those tribes that are related and loyal to the Saudi royal family.

Whether or not America needs two armies is hard to say, but undoubtedly, the Defense Department is as much a threat to America as anything else. A national discussion on reforming it is necessary.

The decent liberals of the Kennedy Era were ground up by the ensuing Vietnam War, Congoid rioting, and other social disruptions, but they were right in warning America about the military acting on its own. They thought that the American military would revolt as a result of not being issued enough weapons, but it seems that instead the Pentagon has become an actor in its own right, more loyal to itself and the illicit 1964 Civil Rights Act than anything else.

[19]If you are already behind the paywall and want to share the benefits, Counter-Currents also offers paywall gift subscriptions. We need just five things from you: