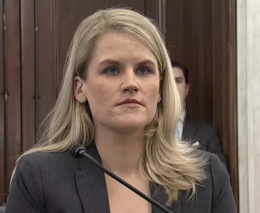 The world was introduced to whistleblower Ms. Frances Haugen this week, a 37-year-old spinster who has come out of nowhere to shine a light on the evildoings inside Facebook.

On the surface, this might sound good. Facebook is an evil company which is unfortunately a necessary one these days if you want to stay in contact with some of your friends, and in some cases, do business.And indeed, Facebook does a lot of rotten things that deserve a whistleblowing.

So which of Facebook’s nefarious misdeeds is Ms. Haugen blowing the whistle on? That Facebook is rigging elections by selectively censoring content? That they are selling their users’ private information to other companies, or sharing it with government intelligence agencies?

No. Ms. Haugen is in fact the opposite kind of whistleblower from what everyone was hoping for. Rather than blowing the lid off Facebook’s malicious use of censorship, Ms. Haugen has come out with the bombshell that Facebook is not censoring enough. She claims Facebook is refusing to censor content that it knows jolly well is causing enormous societal harm in order to make a buck, and she is pleading with the government to step in and force Facebook to censor more. She is literally the whistleblower no one asked for.

This is a story that is hard to write about because it’s just so rage-inducing. Everything about this Frances Haugen story screams “psyop.” This is undoubtedly an op, mostly like orchestrated by or at least in cooperation with Facebook itself. The agenda is so blatantly obvious that a child could see through the ruse, and yet I fear far too many NPCs will buy it hook, line, and sinker.

The worst part of it is its framing, which is utterly diabolical. The woman is pushing for things that everyone knows the establishment wants and which benefits the elites, but this is being depicted as a sort David-versus-Goliath story. In the mainstream media’s narrative, this one woman, strong and yet also quite vulnerable, is standing up to this all-powerful trillion-dollar corporation.

She is now claiming that she lives in fear that Facebook will use their limitless wealth to “destroy” her in retaliation. That is one of the many aspects of this story that makes me want to put my fist through my screen. Not only is this bitch demanding that even more of my free speech should be taken away, but I am expected to admire her bravery for doing so. I wish Facebook would destroy her — but they won’t, because Facebook is the one who put her up to this in the first place.

The dead giveaway that this story is fake is because it is all too perfect. It is clearly designed to confirm all the biases of braindead MSNBC-watching cat ladies. It has all the popular liberal tropes and drops all the right buzzwords.

The story is that Ms. Haugen was part of Facebook’s “Civic Integrity” team, which is the Facebook department that deals with “election integrity.” Thus, Russiagate is being invoked right off the bat. Her job was to prevent Vladimir Putin from stealing another election. The Maddow-watchers will immediately recognize that Haugen is their kind of gal.

In her 60 Minutes interview, which is an establishment propaganda piece masquerading as a concerned citizen story, interviewer Scott Pelley tells us:

Frances Haugen told us she was recruited by Facebook in 2019. She says she agreed to take the job only if she could work against misinformation because she had lost a friend to online conspiracy theories.

There’s QAnon! The tropes keep piling up. What is meant by “lost a friend to online conspiracy theories” is never explained, of course. What happened? Did he or she die? That’s what it sounds like. But it doesn’t matter. The point is that we are meant to believe that Haugen is not just some uptight busybody. The subject of misinformation is personal for her — she lost a friend because of it! She has felt the pain that misinformation causes. Again, it’s all too perfect. Hollywood perfect.

Haugen then tells us that she stumbled upon some Facebook internal studies which show that Facebook and Instagram were causing personal and societal harm, but that the bosses chose to ignore it, because doing something about it would undermine profitability. Harmful content is popular and drives traffic, so Facebook is deliberately profiting off hate. 60 Minutes informs us that “one study says 13.5% of teen girls say Instagram makes thoughts of suicide worse. 17% of teen girls say Instagram makes eating disorders worse.”

And, of course, there is all that darned hate speech. Haugen claims to have seen one study that concluded, “We estimate that we may action as little as 3 to 5% of hate, and about .6% of violence and incitement on Facebook, despite being the best in the world at it.”

That is how you know this is a Facebook op. This information allegedly comes from an internal document, and yet these statements sound like they were meant to be leaked. Facebook is admitting that they aren’t censoring enough, but are still careful to remind you that they are better at censoring than anyone else in the world. If this were a study purely for internal use, there would be no reason to add that last bit.

My favorite part of the 60 Minutes interview is when Haugen says:

When we live in an information environment that is full of angry, hateful, polarizing content, it erodes our civic trust, it erodes our faith in each other. It erodes our ability to want to care for each other. The version of Facebook that exists today is tearing our societies apart and causing ethnic violence around the world.

Scott Pelley then adds, “Ethnic violence, including Myanmar in 2018, when the military used Facebook to launch a genocide.”

Got that? Facebook needs to censor more, or else it will result in genocide!

The other giveaway is when Haugen says:

I have a lot of empathy for Mark [Zuckerberg], and Mark has never set out to make a hateful platform, but he has allowed choices to be made where the side effects of those choices are that hateful, polarizing content gets more distribution, more reach.

If it were indeed true that Mark Zuckerberg is allowing genocides to happen for the sake of his stock portfolio, then how much empathy could you possibly have for him? Only a truly evil person would do that. And yet Haugen goes out of her way to emphasize that he’s not a bad guy.

Haugen goes on to claim that after the 2020 election, her department — the “Civic Integrity” team — was disbanded:

They told us we’re dissolving Civic Integrity. They basically said, “Oh, good, we made it through the election, there wasn’t riots, we can get rid of Civic Integrity now.” Fast forward a couple of months, we got the insurrection.

January 6, check. That’s right: Facebook eased up on censorship for just one moment, and bam!, Trumpers attempted to overthrow the government. Facebook cannot take their foot off the gas for a second. They have to keep the pedal to the metal at all times or else we’re gonna be instantly transformed into Nazi Germany.

Then there’s this exchange:

Pelley: Haugen says Facebook understood the danger to the 2020 election, so it turned on safety systems to reduce misinformation. But many of those changes, she says, were temporary.

Frances Haugen: And as soon as the election was over, they turned them back off or they changed the settings back to what they were before to prioritize growth over safety. And that really feels like a betrayal of democracy to me.

There it is: “betrayal of democracy.” It’s such a perfectly focus-grouped phrase, ideal for pushing all the right emotional buttons on the liberal cat ladies watching at home. Leaving aside the fact that “not censoring political speech is betraying democracy” is peak George Orwell, as a propagandist myself, I have to admire the craftsmanship.

The day after the interview aired, Haugen testified before Congress and pleaded with the Securities and Exchange Commission to intervene. I’m not sure the government can constitutionally force a private company to practice censorship, but I’m not confident that they won’t be able to find a way around that, the way things are these days. The government can already regulate advertising and various types of commercial speech. Maybe they can find some legal hocus-pocus to make it work on those grounds.

The purpose of this op is clear. I have no doubt that Facebook would love to censor more — and yet censorship is unpopular. This op is therefore an attempt to generate public support for censorship. If Facebook can make it look like they are being forced against their will to censor, then they can have their cake and eat it, too.

Most people tend to understand censorship as rich oligarchs silencing the little guy. But this op completely flips the script and tells us, “No. Billionaires like Mark Zuckerberg profit off hate and misinformation, so ratcheting up the censorship will actually be sticking it to those rich fat cats.”

This time it’s not the ADL, the SPLC, or some liberal think-tank calling for more censorship. Facebook’s own studies are telling us that their refusal to censor is causing harm. It has to be true, because why would Facebook lie about this when it’s embarrassing to them?

In a way, this op is actually quite clever. But it’s still stupid and obvious.