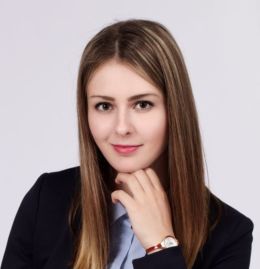 Tereza Hyťhová has been a member of the Czech Parliament since 2017, first with the SPD (Freedom and Direct Democracy) party, and since July 2020 as a member of Trikolora (Tricolor Citizens’ Movement), the new patriotic and Euroskeptic party of Václav Klaus, Jr., the son of former President Václav Klaus. She is a candidate in the Czech parliamentary elections on 8 and 9 October, running on the list of the Trikolora Svobodní Soukromníci electoral alliance. She agreed to give us an exclusive interview in the region of Ústí nad Labem, where she heads the alliance’s list and looks set to get her young party’s best result at the national level.

Hostility to the COVID narrative, the possible end of the European Union, the defense of the national currency, the strengthening of the Visegrád Group (V4), economic libertarianism, and rejection of immigration: Alimuddin Usmani reviews the main points of Trikolora’s platform. Trikolora is the emerging Right-wing party in the Czech Republic. Most polls still showed it at below the 5% threshold nationwide in September, but a new poll published a week before the election [2] put it at 7% in voting intentions. [In last week’s election, Trikolora only garnered 2.76% of the national votes, which is below the 5% threshold to enter Parliament.] 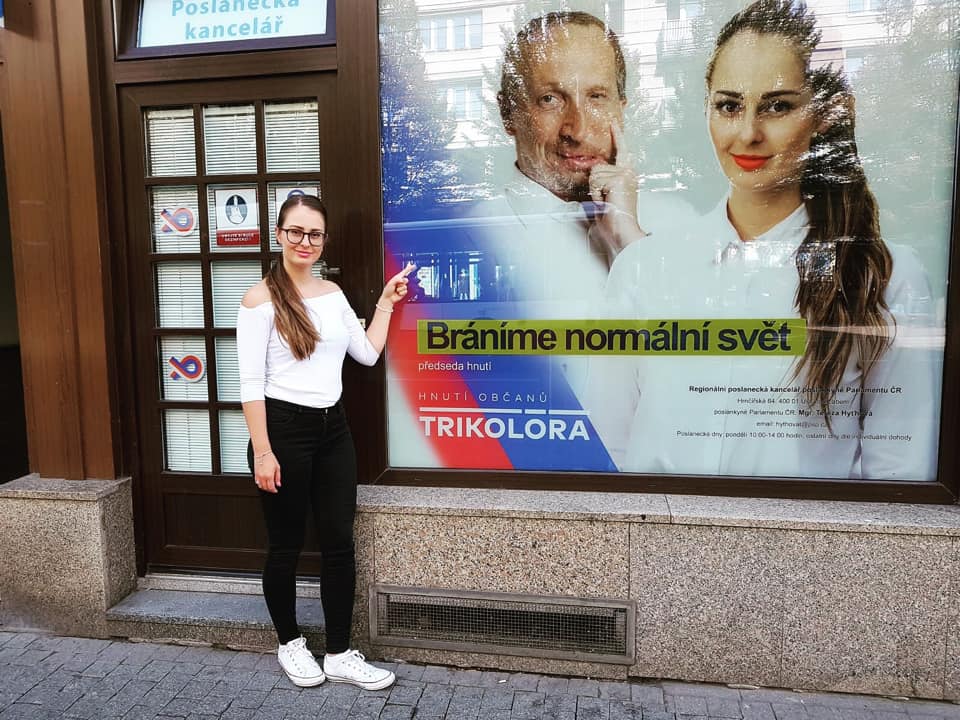 Tereza Hyťhová: In our coalition of Trikolora, Svobodní, and Soukromníci, we want to defend the Czech Republic’s sovereignty and are against adopting the euro. We also want to defend family values and are against gender multiplicity. In particular, there is no need to have 50 gender identities. We advocate the idea of a slimmer state and prosperous citizens, which means we want people to receive their salary with the least possible tax deductions. Our plan is to lower taxes and propose a flat tax of 15%. This will pour more money into the nation’s coffers, as it has in Ireland, which has a flat tax rate of 12.5%. That country has the highest GDP growth rate in Europe.

We also strongly oppose the COVID totalitarianism that has been going on here for a year and a half.

We want to protect our children from this atrocity, which means that we will not allow our children to be mass tested in schools or to be forced to wear facemasks. In general, we want to put an end to these absurd measures, not only in schools but also all over the Czech Republic.

Among the key points of our program I can also say that we are in favor of the abolition of electronic sales registration [the online transmission of sales data to a web service of the tax authorities] and the suppression of inclusive schools [integration of children with various disabilities into mainstream classes], for which I have tabled a bill.

We definitely do not support the European Green Deal, [4] because it is not appropriate at this time to put another burden on the state budget with absurd measures from Brussels which will only hit people’s wallets. It is not desirable to tax gasoline to discourage people from driving and to allow only the President to have that privilege. These are the basic priorities of our program.

Alimuddin Usmani: What are your expectations for these legislative elections?

Tereza Hyťhová: As the head of our list in the Ústí nad Labem region I believe in a double-figure result, and obviously we will pass the 5% mark. Indeed, in recent months, most polls predicted a result of 5%, which would allow us to be represented in Parliament. I think we are going to do much better, because our program, which advocates a return to normal life and freedom for all citizens, speaks to far more than 5% of the people. Every vote counts, of course, but I believe, like our leader Zuzana Majerová Zahradníková, that we will achieve a double-figure result.

Alimuddin Usmani: What is your opinion of Andrej Babiš and his ANO party? [Babiš has been Prime Minister of the Czech Republic since 2017. His party, the name of which means “Yes” in Czech, was narrowly defeated in the recent election.]

Tereza Hyťhová: As a voter, that party has never inspired me, and that is why I am in Trikolora. In general, ANO made great promises four years ago, when I was already running for Parliament. Very few of these promises have actually been fulfilled. Most of the current achievements in the Czech Republic are certainly not due to the ANO party. The fact that Andrej Babiš himself is involved in various political and financial scandals [5] and makes the Czech Republic look bad is detrimental, and no one wants to have a Prime Minister who has been in conflict with the law. I am glad that in our party we do not have people who are under indictment or who have shady dealings involving grants. I hope that people will correctly assess the results of the four years when Babiš and ANO have been in power. There is a huge gap between promises and actual achievements. It is time to think about real change rather than to believe in more empty promises for the next four years.

Alimuddin Usmani: Why is it important for you to preserve the Czech koruna?

Tereza Hyťhová: There are several reasons for this. First of all, we are Czechs, and I want us to have a sovereign country that controls its monetary policy. Adopting the euro would automatically mean giving up control over our monetary policy.

Furthermore, joining the euro would entail immediate costs that no one is able to assess properly. These costs will in any case be enormous, and taxpayers will have to pay for them. There would be another consequence of adopting the euro, namely an increase in inflation. By the end of this year, inflation will probably be at 5 or 6% already. We do not want the Czech Republic to submit to Brussels, and for that reason it is always better to have our own currency.

From an economic point of view, it would not be beneficial, either. If we look at the example of our neighbor Slovakia, citizens do not have more money in their wallets now than they did before their adoption of the euro. It is essential to preserve the Czech koruna and to reject the euro, because no one can predict the future of the European Union in a few years’ time.

Alimuddin Usmani: What do you think of cooperation with the V4?

Tereza Hyťhová: This is also part of our program. We want to have close economic and political cooperation with the V4. As I pointed out in the previous answer, we do not wish to submit to Brussels, and we refuse any diktat from the European Union. We want to cooperate with countries that are close to us, and this is definitely the case with the V4 countries and some others.

The V4 represents the future of cooperation at all levels because we have to take into account that the EU may disappear one day, and we do not want to be isolated within Central Europe. That would be absurd. Moreover, this close cooperation with the V4 has been fruitful at many times in the past.

Alimuddin Usmani: If you were in power, what would you do about the health measures against COVID-19?

Tereza Hyťhová: First, the pandemic legislation would be repealed. This totalitarian law takes away the rights and freedoms of citizens. It also prevents freedom of trade; we do not want any more barriers to trade. We no longer want citizens to be affected in their daily lives. And if they have to be affected, then it should be in the minimum possible way and certainly not on the scale on which the government has changed people’s daily lives in such a negative manner. We want people to breathe freely, without facemasks. We want them to be able to work, to have access to education — in a word, to have a free life.

These COVID laws are actually preventing people from living normally. That is why it is necessary to repeal them immediately. We certainly do not want lockdowns, and people have made it very clear that they do not, either. Our party has never voted for lockdowns, for a state of emergency, or for the pandemic legislation.

I asked for an immediate reopening of schools. Apart from access to education and trade, it is also worth mentioning access to culture. This is an area that has been significantly affected by the COVID laws. Theaters and cinemas were closed. We no longer want people to be deprived of entertainment. We simply wish for a return to normal life and to the world as it was before.

Alimuddin Usmani: For the time being, the Czech Republic has been relatively unaffected by the migration wave. Do you think this could change?

Tereza Hyťhová: I think it is best to be proactive in this area. We know what is happening in Afghanistan and other countries, and there will probably be migration waves and crises in the near future. We reject any relocation of migrants. The European Union should not impose migrant quotas on member countries. We are categorically opposed to such quotas; each country must be able to decide for itself.

The Czech Republic must speak out clearly against illegal immigration; our borders must be defended. After all, historically, castles were built to protect against foreign invasions. Everyone was concerned with protecting their fiefdom in order to protect their people and citizens. That is what we want, too. We want to strengthen the Czech borders and ramp up controls so that illegal migrants do not wander into our country.

Today, even if there is not much talk about it, there are hundreds of illegal migrants on our territory. We must first look after the welfare of our citizens, and then we can help others.

Many people ask me if I have any compassion for these migrants. I tell them that I have compassion for people who are living in situations of war or terror, but I think it is not possible to welcome all these people, especially as they come from cultures, religions, and traditions that are very different from ours. It is possible to help these people, but it is better to do so in the places where they live or in neighboring countries where they are safe. We definitely cannot import such different cultures into Europe. That would not be a good thing. It is our citizens who must remain our number one priority.