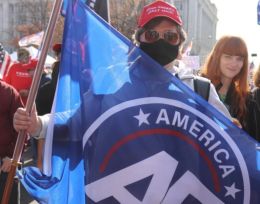 An article by Aquilonius was recently published here at Counter-Currents, ”Is America First Cracking Up?” While I am a regular viewer of Nick Fuentes’ nightly show, America First with Nicholas J. Fuentes, I don’t pay much attention to the broader America First Extended Universe, so I was a bit slow in getting up to speed on the most recent drama going on there.

The short version of the story is that Ryan Sanchez, aka Culture War Criminal (CWC), had been a part of the America First (AF) movement but was recently expelled for criticizing Fuentes and other high-profile AF members. In addition to this, CWC was subjected to an intense online struggle session where Beardson Beardly and Baked Alaska acted as the grand inquisitors. There is likewise another America First streamer who goes by the name of Red Pill Gaming (RPG) who has also earned Fuentes’ ire by questioning his methods and decisions. He was similarly subjected to a hot grilling by Fuentes on a Killstream episode.

The controversy stems from the fact that many people consider some of the critiques made by CWC and RPG to be valid. These include questioning why a nominally pro-white operation employs so much black music in their content; the wisdom of Fuentes participating in a documentary made by Louis Theroux, a notorious liberal hatchet man with a long record of hostility towards pro-whites; the tendency of some AF streamers to do gaming streams rather than more serious political content; and the utility of having a time bomb like Baked Alaska associated with the AF brand.

Many people’s perception is that Fuentes and company are lashing out very aggressively at people who are in fact offering legitimate criticisms. Some believe that this is evidence that Fuentes is becoming megalomaniacal. He’s expelling people from his movement for being honest and telling the truth!

I have a somewhat different take on this, but first I have to discuss another matter.

Counter-Currents has its share of detractors. Around the net, I have encountered people who say, “How could you write for Counter-Currents? One time Greg Johnson said blah blah blah.” This doesn’t bother me, since I would be getting some kind of grief no matter who I was writing for. If I wrote for American Renaissance, I would be hearing, “Jared Taylor won’t talk about the JQ!” If I wrote for The Daily Stormer, it would be “Weev’s a Jew!” If I wrote for VDare, if would be “race-mixing boomers!” Some people will always find something to complain about.

It’s true that I could have just started my own blog and then I would not have to deal with any of that. I would only have to answer for the things I said and did. But building an audience from scratch is a lot of work. Why would I do that when I could write for an established brand that already has one?

But there are some trade-offs when creating content for an established brand. You have to be a brand ambassador. Every brand is going to have a party line, and you have to work within those parameters. The heads of the brand will also have friends and enemies, and while you don’t have to make all of them your own, you certainly can’t go around trashing their friends or praising their enemies. In short, you have to be a team player.

On platforms like YouTube or Dlive, everyone is essentially an independent operator. But even there, there are cliques of like-minded content creators who support and promote each other. Getting in with such a clique might help you grow an audience faster, but it will still function as an informal quasi-brand, with all the same advantages and disadvantages.

When I talk about brands, this can be juxtaposed with a “scene.” The Dissident Right is not a brand; it’s a scene encompassing many brands, sub-scenes, and individual actors. Anyone can come along and call themselves “Dissident Right,” and there is no central authority who can refute that claim or expel the claimant.

It might be helpful to look at Fuentes’ career arc thus far. He began his political streaming career making content for an established brand: the Right Side Broadcasting Network. He was later dropped by them for attending Charlottesville –i.e., for going off brand. After a brief partnership with James Allsup, he spent the next couple years as a solo operation. Sometime around 2019, he decided to turn his solo operation into a brand.

As a brand, America First works differently from all the other brands I have mentioned so far because it is not based on one website, but rather across multiple streaming services. There are certain people who Fuentes blesses as Nick Fuentes-approved content creators, and they become representatives of the AF brand. There are a lot of benefits in doing so. While Fuentes is not paying his creators, his clout is such being on his team guarantees audience interest and, by extension, superchat money.

If we are to take the view that AF is for all intents and purposes a brand, which I do, then yes, Fuentes is entirely within his rights to get angry about being criticized by people who are using his brand. Asking whether or not such criticisms are legitimate is beside the point.

“He doesn’t talk about Jews” is one criticism of Jared Taylor. Is it legitimate? Maybe it is and maybe it isn’t. I could see how one could argue that by not talking about Jews, Taylor is not giving people the full picture. But if you want to write for American Renaissance, you are essentially forfeiting your right to complain about that.

Similarly, John Derbyshire at VDare is in an interracial marriage. One might say that it is bad optics or looks hypocritical for an outlet dedicated to white survival. Is that a valid criticism? Maybe it is and maybe it isn’t. But do you think Peter Brimelow would tolerate anyone on his own staff complaining about it?

I therefore have to side with Fuentes here. Whether CWC or RPG’s criticisms of Fuentes are legitimate or not doesn’t matter. That’s the trade-off when you want to be a content creator for an established brand. Portraying Fuentes as “not being able to handle criticism” is unfair. No one who operates a brand is going to allow the content creators on their own brand to publicly criticize them, legitimately or otherwise. If something comes up that is such a big deal, you don’t make content for that brand.

RPG disputes this and claims that rather than being a brand, America First is more like a scene. He says AF is more of an idea or a collection of beliefs, and that anyone can call themselves America First with or without Fuentes’ approval. After all, Fuentes didn’t invent the terms “America First” or “groyper,” so who is he to police those who refer to themselves by those labels? In theory, RPG is right, but in practice, if a twentysomething white male starts a YouTube channel and calls himself “America First,” he is probably not marketing his content to Seinfeld enthusiasts. Rather, he is trying to tap into Nick Fuentes’ audience.

When it comes to the claim that these AF disputes are being handled poorly and with bad optics, I think Fuentes’ detractors are making a stronger point. The streams of CWC getting chewed out by Beardson Beardly and Baked Alaska (who came off as particularly unhinged), or Nick Fuentes’ shouting match with RPG on the Killstream, are not pleasant to hear.

Beardson and CWC met in person at an anti-vax rally in Springfield, Illinois over the weekend, and a heated exchange ensued. Beardson was so aggressive towards CWC that some normie MAGA moms in attendance actually came out in defense of CWC. This is a sign that these extremely bombastic humiliation rituals are not appealing to normies. Maybe AF feels that it is necessary to make an example of CWC, but there is nevertheless a subset of their target audience who find their methods distasteful.

Some of this may be due to the nature of America First as a brand. If AF was centered on one website, to drop someone from the brand you could just drop the person from the site. With AF, however, you become part of the brand by being endorsed by Fuentes, and dropped by being disavowed. Regardless, over-the-top aggression being employed to accomplish this is less than ideal.

As a result of these humiliation sessions, some people have started describing America First as a cult. I would dispute this, but the fact remains that there are people who see these developments as a bad sign. If someone were a newcomer to America, and the first thing they heard was the video of Beardson Beardly and Baked Alaska screaming at CWC for disagreeing with the boss, no one could fault them for thinking that they had just stumbled across a cult.

» Counter-Currents Radio Podcast No. 375 Greg Johnson, Stephen Paul Foster, & Richard Houck on How to Respond to Being Called a “Hater!”