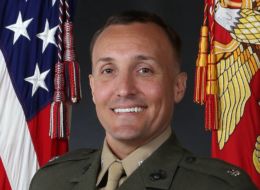 Scheller’s criticism made him a martyr after he was relieved of command [2] following his comments. He didn’t shut up, and vowed to expose the military’s dirty deeds for all the world to see. He was eventually arrested and thrown into the brig for violating a gag order the military had placed on him. This only increased his capital as a martyr – as well as funding for his legal defense fund.

Conservatives see him as a sign that military officers and enlisted men are ready to rise up against their woke commanders. In reality he doesn’t show that, however. Scheller’s only criticisms related to how the departure from Afghanistan was conducted, and insisting that we should have remained there. That’s not the America First position. Moreover, he doesn’t like Donald Trump or his movement, who are the very people helping him. He said this in a Facebook post [3]:

You can buy Greg Johnson’s The Year America Died here. [5]

In one of the few cases of a senior general doing anything good, Major General Christopher Donahue, commander of the 82nd Airborne, ordered his troops [6] to clear out a transport plane of several Afghan migrants so they could have room for a war trophy vehicle that had been captured from the Taliban. That seems like a much better use of military resources than yet more Afghan migrants coming to the US — but not to his troops. Several of his subordinates ratted Donahue out to the conservative media. They claimed the rank and file were appalled that the general valued the war trophy more than bringing unvetted Afghans to American shores.

Unfortunately, this is not an isolated incident. Veterans were heavily involved in advocating for mass Afghan resettlement. In fact, they took the lead on this. Sixteen veterans groups signed [7] a letter calling on Biden to evacuate all Afghan “allies” from the country. “Embedded in our service is an ethos to leave no one behind,” said Chris Purdy, Program Manager of Veterans for American Ideals. The New Yorker published a long profile of some of the veterans working day and night to flood America with Afghans. One of the main figures it highlights is Matt Zeller [8], a vet and former CIA spook. Counter-Currents readers may remember him from an earlier article where he became a conservative hero for criticizing Biden for not doing enough to extract tens of thousands of Afghans. Zeller served as the poster boy for this effort. In an interview, he said that Stephen Miller should be tried for war crimes [9] for opposing Afghan resettlement. This opinion is, sadly, not atypical for these vets.

While many on the Right believe most of the troops back Right-wing candidates, the numbers tell a different story. A Military Times poll [10] before the 2020 election found that more active duty service members preferred Biden over Trump, at 41.3% to 37.4%. Nearly half of serving troops said that they had an unfavorable opinion of the then-President. At the start of 2020, Bernie Sanders garnered the most military donations of any candidate [11], including Trump. In the 2020 general election, only those who listed the Marines and the US military as their employer gave more to Republicans than to Democrats. Donors who listed the Army or Air Force were split between the two candidates, while those who listed the Department of Defense or Navy donated overwhelmingly to Biden.

The military’s current demographics may explain this. It’s becoming increasingly less white, with 43% of active duty members [12] being non-white today. Many of its white service members also marry outside their own people [13]. Mixed-race marriages are far higher among servicemen than it is in the civilian population. An example of this is Rylee McCollum [14]. McCollum was one of the 13 soldiers killed in the terrorist bombing at Kabul Airport on August 26. His black wife gave birth to their child a few weeks after his death.

The impact of the woke ideology on ordinary troops can be discerned in a recent Twitter brawl involving conservative Josiah Lippincott, a former Marine officer. Lippincott mocked General Milley’s physique, which drew the full ire of military Twitter [15]. Male soldiers who proudly announce that they are sexual assault survivors ripped into Lippincott for daring to attack a general. Even some otherwise Right-leaning vets joined in the pile-on.