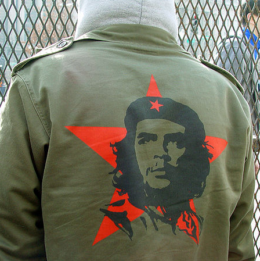 Critique of capitalism has a long history. Broadly beginning with Marx and Engels, capitalism’s critics have morphed over time as capital itself continues to evolve. However, regardless of the source of discontent — ranging from nineteenth-century Communists, to twentieth-century socialists, to twenty-first century black-pilled intellectuals — certain themes pervade; namely, a general transparency between capitalism and whatever label can be applied to today’s Western ruling order: neoliberalism, postmodernity, new and/or late capitalism, liberal Communism, post-Fordism, etc. Another more substantial commonality found amongst the various critiques is the notion of capitalism’s ability to subsume ostensibly anti-capitalist movements and ideals. This leads to the question of what, if anything, is truly anti-capitalist/establishment in today’s zeitgeist? The answer is simple, and in the form of another question, it is: What is universally rejected — vice subsumed — by modern capitalism?

Before this question can be answered, a brief examination of capitalism co-opting anti-capitalist sentiment must be undertaken. A good example of this idea is Guy Debord’s take on the subject in The Society of the Spectacle where he states, “Complacent acceptance of the status quo may also coexist with purely spectacular rebelliousness — dissatisfaction itself becomes a commodity as soon as the economy of abundance develops the capacity to process that raw material.”[1] [2] The idea of “rebelliousness” being considered a “raw material” by the spectacle (read capitalism) is echoed in Nick Land’s theory-fiction essay Meltdown: “Communist iconography has become raw material for the advertising industry, and denunciations of the spectacle sell interactive media.”[2] [3] Another way capital neutralizes legitimate dissent is by steering it into mere indifference by reminding would-be dissenters of its total hegemony.[3] [4]

A more recent examination of this topic is Mark Fisher’s Capitalist Realism: Is There No Alternative? Though the book is largely an expose of modern capitalism’s absolutism, it is on the subject of capital subsuming anti-capital that Fischer offers a rare framework for actually combatting today’s ruling order. Building on Jacques Lacan’s idea of the Real vice reality (reality is what the ruling order tells us is real via, amongst much else, symbolism; the Real resists that symbolism, and is the underlying truth of manufactured reality), Fisher states, “ . . . one strategy against capitalist realism could involve invoking the Real(s) underlying the reality that capitalism presents to us.”[4] [5] Fisher goes on to list three Reals: environmental catastrophe, mental health, and bureaucracy.

Unfortunately, in regards to Reals existing outside reality (capitalism’s purview), all three of these examples fall massively short. Though capitalism does destroy the environment, make people insane, and burden humanity with bureaucratic nightmares, it has long been aware of this and adjusted accordingly by way of co-opting any and all forms of whistle-blowing on these issues. There exist countless critiques of capitalism and its negative effect on the environment, mental health, and the administration of society in the form of big-budget films and documentaries, wealthy not-for-profit Non-Governmental Organizational programs, and spectacular protests; i.e., all three of these allegedly anti-capitalist examples have long been commodified and processed by capital, effectively nullifying them as legitimate forms of dissent. One needs to look no further than the explosion of the “green” and “organic” markets (environment); a plethora of non-profit organizations like Active Minds, World Federation for Mental Health (WFMH), and the National Alliance on Mental Health (NAMI) (mental health); and anti-bureaucracy films like Brazil, Eye in the Sky, and Paths of Glory (bureaucracy). In Fisher’s own words, “Far from undermining capitalist realism, this gestural anti-capitalism actually reinforces it.”[5] [6] Fisher’s unawareness or mental blockage of this is potentially indicative of his own mental health issues.

As mentioned above, examining what capitalism universally rejects as opposed to subsuming is one of the best indicators of a path out of the murky waters of today’s soul-crushing, neoliberal ruling order. The Dissident Right is an obvious example of this. Though small aspects of its predispositions are repurposed for aims within the scope of neoliberal acceptability (Western man’s historic proclivity toward fascism redirected to combatting a new fascism for the West while simultaneously supporting a neo-fascism for Israel is an easy example),[6] [9] it is most often targeted for annihilation. No longer requiring the use of overwhelming, Second World War-style hard power, neoliberal capital — being the only show in town — uses its immense soft power to simply disappear the Dissident Right. Whether it utilizes defunding by way of removing the ability to partake in the modern transfer of money, preventing the ability to gather and organize, or simply demonization in the media, the Dissident Right’s rejection from approved modern thought is beyond obvious. The example of media demonization is the most widely-used and detrimental, a power so great that it would make Genghis Khan weep in awe.

Even capitalism’s Cold War opposite, Communism, has been devoured. One has to look no further than casual socio-cultural observations to see the truth of capitalism’s universal rejection of Dissident Right-wing thought while it simultaneously subsumes everything else. You can buy a t-shirt with Che Guevara’s face on it at the mall, though I’ve seen no apparel for sale bearing Mussolini’s likeness. The modern culturati continue to consume beatnik literature for its groundbreaking methods of writing and storytelling, but do they know of Céline? Anything even remotely “counter-cultural” since circa 1965 is now default American mainstream consumer culture.

The subconscious maintains an awareness of falsehoods, however. The inner self knows the body and mind are participating in a simulacrum, that what is billed as true and real is actually fake. This culminates in, amongst much else, modern hysteria: the all-too-common cognitive dissonance seen in spectacular Left-wing protests and college campus screech sessions. No amount of engineered morality and encouraged virtue-signaling on how to feel about non-whites, foreign wars, the sudden emergence of transgender topics, or any other fabricated pseudo-events will change the fact that a lie is being lived. Fisher was well aware of this; paying tribute to Deleuze and Guattari, he states, “if . . . schizophrenia is the condition that marks the outer edges of capitalism, then bi-polar disorder is the mental illness proper to the ‘interior’ of capitalism.”[7] [10] Sadly, Fisher — ever the committed Leftist — and his subconscious may have finally come to terms;[8] [11] he killed himself after decades of hope that the “historical and revolutionary Left” would magically and forever free itself of the shackles it so willingly helped create in lieu of being “constrained to revive the wheels of capital in order to lay siege to them one day.”[9] [12]

Though the futility of moving forward with ideas that are universally hunted down and eradicated by the largest consolidation of power the world has ever seen is disheartening, Right-wing dissidents can take at least some solace in the fact that they get to be what every Left-wing wannabe revolutionary desires more than anything in the world: an actual dissident. The Left’s subconscious knows that the Dissident Right gets to be oppressed; we have the luxury of original thought. Our expulsion by the most unholy leviathan of neoliberal capitalism is to be unburdened by the strongest chains ever clamped on humankind in world history. In a very Real way, we are free.

[6] [20] In Simulacra and Simulation, Jean Baudrillard states that fascism, though an “irrational, demented resistance,” was in fact “a resistance to something much worse” (my emphasis). (Baudrillard, 48).