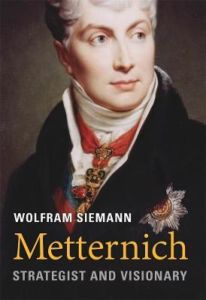 Julius Evola called Klemens von Metternich the “last great European.” The Right-wing philosopher saw the Austrian statesman as his ideal leader instead of the fascist strongmen he saw in his own time. Statements like this have made the Right partial to Metternich, seeing him as a leader who tried to reverse the poison unleashed by the French Revolution. This positive assessment is further enhanced by liberal historiography that paints Metternich as an arch-reactionary absolutist — which is music to the ears of Right-wingers.

But that impression may be mistaken. German historian Wolfram Siemann depicts a very different man in his recent biography, Metternich: Strategist and Visionary. Instead of a statesman who tried to impose the vision of Joseph de Maistre on the Continent, we find a proto-European Union technocrat instead. Siemann emphasizes that his cosmopolitan subject was a conservative who favored institutions over Volk.

Siemann’s main goal in his book is to refute the image of Metternich as handed down by the Austrian historian Heinrich von Srbik. Srbik was a pan-German nationalist who joined the National Socialist party after the Anschluss. His multi-volume biography of Metternich is still considered the standard work in the German-speaking world (it has never been translated into English). Srbik portrayed Metternich as an out-of-touch conservative who opposed nationalism and forced Germans to live in a multicultural state. Siemann attacks Srbik for believing in biological race and asserting that nations are defined by their people rather than by their institutions.

The long-dead Austrian historian is probably the second-most referenced figure in this biography besides Metternich himself. Siemann cannot go five pages without dismissing Srbik’s work. This makes an odd read for Americans who have never heard of Srbik. Most of the Introduction is dedicated to refuting Srbik as well. Very few English-language academic works — especially ones put out by the big publishers — dedicate so much time and effort to challenging a single historian’s work. Moreover, Siemann appears to confirm much of Srbik’s general assessment; the difference is that Siemann finds anti-nationalism a good thing.

Metternich was one of the greatest diplomats, if not the greatest diplomat, to have ever lived. He helped engineer a grand alliance against Napoleon and orchestrated the Concert of Europe that led to many years of peace and stability on the Continent after the Napoleonic Wars ended. This review will not cover these points, as they are less relevant to our concerns, and will instead focus on Metternich’s political philosophy and his tense relationship with German nationalism.

Siemann refutes the image of Metternich as a Maistrean reactionary. He was rather a Burkean conservative who deeply admired England and its parliamentary system. He advocated for “enlightened” reforms in Habsburg lands and was a firm opponent of neo-absolutism. He was also not a devout Christian, and in his personal correspondence he lamented the intolerance and bigotry of the faith.

These beliefs would shape how Metternich conducted affairs throughout his long tenure of service.

Metternich’s ideas about nations and nationalities were certainly out of sync with those of contemporary nationalists. Siemann argues that Metternich and his fellow conservatives were primarily opposed to the unity of nation, language, and territory. This, in their opinion, could only lead to war and chaos. It was better to define a nation by its rulers and institutions. Nationalities could still retain their identity within a state, but they could not demand that the state reflect their identity alone. Siemann compares this to the European Union, where nation-states exist within it but the individual states do not conform to a single European national identity. What unites these EU nation-states isn’t blood or culture, but shared laws and a constitution. This sounds remarkably like Conservative Inc. talking points.

Metternich considered himself a German, but was hostile to the idea of a unified German state for Germans alone. He envisioned many ethnic minorities existing within the greater German state where they could retain their language and culture. What would unite Germany was a nice little constitution and a monarchy.

German nationalists had different ideas. They wanted a Germany for Germans and felt blood was more important than institutions. German nationalism began to emerge during the Napoleonic Wars and continued to grow in the years immediately afterwards. Young students would gather together to sing patriotic songs, burn anti-German books, and swear their lives to the nation to come. The universities and student fraternities were the primary incubators of nationalism in German-speaking Europe.

The apparent danger in this movement came to the fore with the murder of conservative playwright August von Kotzebue by the nationalist student Karl Sand. Kotzebue was notorious for criticizing nationalists, and he was further hated for writing “immoral” plays. Sand intended the murder to inspire his fellow nationalists and demonstrate the movement’s seriousness. His stature was only raised upon his arrest and execution. Sand was no crank, but an intelligent student who was able to speak for his generation. German nationalists were moved by what they saw as his sacrifice for his people, and Sand became a martyr. His act inspired others to attempt to copy his propaganda of the deed.

Metternich and his class were horrified by the murder and felt more would follow unless they took dramatic action. They reacted to it in much the same fashion that our rulers have reacted to Charlottesville and January 6. Metternich issued the infamous Carlsbad Decrees of 1819 in the hope that they would strangle the nationalist movement. Student fraternities were banned, freedom of the press was eliminated, and nationalist professors and civil servants were dismissed.

Siemann defends the Carlsbad Decrees as necessary measures against a dangerous movement. The author ties these acts to contemporary events in the Epilogue, making the similarity to modern censorship efforts all too clear. Siemann questions whether freedom should allow institutions to be attacked, politicians to be threatened, anti-Semitism and “incitement of the masses” to be spread, and the youth to sing songs about sacrifice and hate. The historian argues that an independent judiciary and “good criminal law” keep a lid on these excesses. In the same way, Metternich’s measures weren’t repressive but merely tried to preserve public order — or so Siemann believes.

Liberals today make the same arguments in order to censor nationalists today. “Their words cause violence and spread hate! We can’t let the youth be brainwashed by these dangerous ideologues. We must limit speech for the sake of democracy and freedom!” It makes sense that Siemann sees a proto-EU technocrat in Metternich. It’s the best way to sell him to the twenty-first century public.

Metternich, of course, was not quite an EU technocrat. He wasn’t fond of democracy, and he believed monarchy was the best form of government. As an aristocrat, he felt his class should continue to rule and retain its privileges. He didn’t espouse human rights or gender equality, either.

But despite his many admirable qualities and superb statesmanship, a reader can still see Siemann’s point. Metternich stressed norms, cosmopolitanism, and deference to institutional power — much like our present elites. Identitarians have more in common with the nationalists Metternich persecuted than with the man himself. We also strive for an ideal that is being condemned by the powers-that-be. We also want a homogeneous nation that realizes our people’s destiny. We also value our people more than institutions. And we are dreamers as well. Karl Sand and his sympathizers deserve more of our attention, even if they were labelled the “liberals” of their day.

One can admire Metternich as a statesman while being clear-headed about what he represented. It’s nonsensical simply to adore him because he was an authoritarian or a conservative figure who liberals don’t immediately see as a racist. He wasn’t like us, and it is only his leadership qualities that we should learn from.

Metternich wasn’t the “last great European.” There are many Europeans like him today. They’re just not as bright, sensible, or stylish.