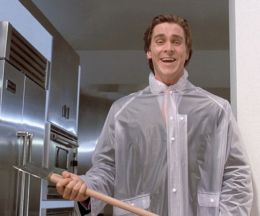 “You’ll own nothing; and you’ll be happy about it.” — Klaus Schwab

“I have to return some videotapes.” — Patrick Bateman

Constant Readers will recall that the Covid restrictions, even here in Stars Hollow, have led me to become an aficionado of YouTube videos of the “reacts to first time watching” genre.[1] [2]

With the Halloween season upon us (signaled of course by the appearance of the first Christmas gift commercials [3]), the reactors and their patreons have begun shuffling through the horror/slasher genre from Nosferatu to Psycho to The Shining to such recent sludge as Rob Zombie’s Halloween series reboot.

One item that has popped up, rather surprisingly, is American Psycho, the 2000 film by Mary Harron, based on the book by Bret Easton Ellis and starring Christian Bale as the titular nutjob, Patrick Bateman.[2] [4] It’s a surprise because, despite plenty of blood and guts, including a video shoutout to Texas Chainsaw Massacre that will later recur in real life — or what passes for it in Bateman’s fantasies — the film (and even the book, which contains a lot more gore than any mainstream film would ever attempt) are hardly intended to be simply slasher fare. I would consider it a “horror film” only in the sense that some “respectable” documentaries or exposes are condemned for being “too graphic” without being actual “exploitation” films.[3] [5]

Anywho, YouTube’s algorithms decided to recommend to me a reaction to American Psycho by some German guy. I thought this might prove interesting, but had to jump out after several minutes. The problem was that German Guy (let’s call him Fritz) kept buying into Bateman’s obviously phony yet politically correct or “woke” banter,[4] [6] such as “Cool it with the anti-Semitic remarks” or this wonderful slab of cheese (delivered in a restaurant, of course), when Bateman is asked to justify his claim that there are more important things than “Massacres in Sri Lanka, about how the Sikhs are like killing tons of Israelis over there”:

We have to end apartheid for one. And slow down the nuclear arms race, stop terrorism and world hunger. We have to provide food and shelter for the homeless, and oppose racial discrimination and promote civil rights, while also promoting equal rights for women. We have to encourage a return to traditional moral values. Most importantly, we have to promote general social concern and less materialism.

You can buy James O’Meara’s book The Eldritch Evola here. [8]

At lines like this, Fritz would be puzzled; “He seems like such a nice guy.”[5] [9] Now, kudos if Fritz is really seeing this film for the first time, with no background research (one can’t help but cynically suspect that some of these folks are just pretending),[6] [10] and I suppose there may be some cultural misfit here; but still, you’d have to be as clueless as the rest of Bateman’s circle of friends and co-workers to think that the content of his patter, rather than the inanity of it, reveals his character (or rather, lack thereof).

Juxtaposing these two it occurred to me that, although Bateman and his crew are obviously supposed to be bitterly satirical portraits of ‘80s New York yuppies, Bateman’s vibe is really quite European. After all, America’s moneyed elites may be, of course, ethnically American, but since the days of Ben Franklin they take their cues from “sophisticated” Europeans, not flyover Trump voters.

The excessive grooming with just the “right” products,[7] [11] the mechanical spewing of “correct” opinions (“Cool it with the anti-Semitic remarks”, “We must not forget the fight against world hunger,” etc.), the need to “fit in [12]” (not like some American “cowboy” individualist) — what, after all, is the real difference between the ‘80s yuppie and today’s bugman? Surely not the mere preference for an apartment overlooking Central Park rather than a pod, or for sea urchin ceviche or Mud Soup and Charcoal Arugala rather than grasshoppers.[8] [13] As Gregory Hood observes,

Ellis noted in an interview that the reason he spends so much time in the book discussing clothes is because hair styles, the cut of suits, and the variety of glasses are the only ways the characters have to tell people apart. Of course, seeing as the men at Bateman’s workplace of Pierce & Pierce all share similar tastes, even this doesn’t really work. The pursuit of status devoid of significance leads to a collection of interchangeable, replaceable men who can instantly tell the cut of a suit but can’t say for sure if one of them has been killed or not.

Bateman, of course, “gets away with” his crimes, at least as far as the film is ending. He could have become the American Macron or taken a seat at Davos or the World Economic Forum. When Bateman covets Valentino suits, it’s called “soulless yuppie consumerism,” but when it’s political and social “solutions,” it’s called “globalism” or “the new normal” or “Build Back Better.”

Imagine him announcing vaccine mandates in that voice [14]:

Speaking of politics, when Trump was elected, there was an explosion of Trump as American Psycho discussions, memes, and jokes [19] among the post-PC, proto-Woke crowd. And not without reason: Trump (and Ivana) appear throughout the book, with Trump in his pre-political, pre-reality show avatar as the social-climbing buffoon endlessly mocked in the pages of Spy magazine as the “stubby-fingered vulgarian.” Bateman admires Trump, imitates him, follows his adventures on “Page Six,” tries to get invited to his parties, and so on. All this is dropped from the film (except for a line in the first scene were Bateman asks, as in the book, “Is that Ivana Trump over there?”), I suppose because Trump was old news in 2000, prior to The Apprentice jumpstarting his career.[11] [20]

While the book ends with a reference to a George H. W. Bush speech after his election in 1988, the movie dials time back a bit to use Reagan’s “I accept responsibility but not the blame for Contragate [21]” speech in March as its political objective correlative as Bateman and crew knock back yet another round of cocktails while making yet another set of fancy dining plans:

Bryce: [watching Ronald Reagan on TV] How can he just stand there and lie like that? He makes himself out to be a harmless old codger, but inside . . . inside . . .

Bryce: Come on, Bateman, what do you think?

Harmless old codger, eh? In our current Globo Psycho reality, I like to imagine the president formerly known as “Joe Biden” giving one of his “Build Back Better” speeches and surprising us, throwing off his handlers, ignoring the teleprompters, and intoning something like this before the screen goes black:

My pain is constant and sharp, and I do not hope for a better world for anyone. In fact, I want my pain to be inflicted on others. I want no one to escape. But even after admitting this, there is no catharsis. My punishment continues to elude me and I gain no new knowledge about myself. No new knowledge can be extracted from my telling. This confession has meant nothing.

[2] [25] See Greg Hood’s excellent review of the cultural implications of both film and book here [26].

[3] [27] If Harron and Ellis had less self-awareness, they might be compared to director Robert Aldrich and screenwriter A. I. Bezzerides, whose Kiss Me Deadly was intended as an attack on the “sadism” of Mickey Spillane, only to wind up being so ruthlessly violent that it was condemned by the Catholic Board of Review; see my “Mike Hammer, Occult Dick: Kiss Me Deadly as Lovecraftian Tale [28],” reprinted in The Eldritch Evola . . . & Others: Traditionalist Meditations on Literature, Art, & Culture [29]; ed. Greg Johnson (San Francisco: Counter-Currents, 2014).

[4] [30] The book and film are set in early 1987, which I think predates the use of PC as a casual term (rather than a bit of duckspeak in a Partisan Review essay of the ‘50s), and of course predates our “woke”; it’s interesting that as the problem continues, we just keep changing the term rather than stamping it out.

[6] [32] “Wait, how can she be dead, the movie just started!” So far I find the reactions to Psycho the most interesting, such as how everyone starts off thinking Antony Perkins is cute and at different points wise up (while just about everyone thinks Jack Nicolson “already looks crazy” when driving with his family to the hotel at the beginning of The Shining); or at what point they realize “Mother” is long dead. Also, everyone seems genuinely surprised by the Big Reveal, suggesting that despite decades of indoctrination, audiences are as unlikely to suspect the person in the housedress wielding the knife is a male as they were in 1960. My suspicions are aroused by a couple who notice the skull superimposed for a few frames over Perkins at the end; I don’t think anyone could see that on their first viewing unless told to look for it, but I may be wrong.

[7] [33] Bateman is the very model of the snark, “He’s not gay, he’s just British” (or Welsh, in Bale’s case). He’s so resolutely straight that when he puts his hands on uber-dork Luis to strangle him (for having a better business card than Bateman does) and Luis mistakes this for a long-awaited romantic overture, he’s so repulsed that he can’t even kill him: Gay panic beats psychopathy!

[8] [34] “While many of the dishes in American Psycho sound like fine dining foods, the fancy names rattled off by the waiters disguise the fact that most of the food is practically inedible, from the rare roasted partridge and the swordfish meatloaf to the charcoal arugula salad. Yuck.” See “The Truth About American Psycho‘s Famous Opening Credits Restaurant Scene [35].”

[10] [37] Several reactors have noticed Bateman’s Covid-ready mask [38] as he revisits what he assumes will still be the scene of his crimes. Alas, the Patrick Bateman meme masks [39] are “not designed for medical use, or as personal protective equipment against coronavirus (COVID-19).” Of course, some of us might think they’re quite sufficient as “personal protective equipment against coronavirus,” thank you very much.

[11] [40] In a post-election video [41], Ellis says that if he had imagined Trump as President, the publisher would have told him he had gone too far. Ellis is hardly “one of us,” but his recent collection of essays against the grain, provocatively entitled White (New York: Alfred A. Knopf, 2019) earned him some “strange new respect” among what was then the “Alt Right.” Gregory Hood (op. cit [26].) already noted in 2013 that “Bret Easton Ellis is perhaps one of the most biting trolls of Twitter, poking fun at the new taboos of the internet age. When Dan Savage received a media assist in his transformation from sexual degenerate to Civil Rights Leader (hey, it worked for Martin Luther King) and debuted his ‘It Gets Better’ campaign, Ellis tweeted [42], ‘Can we get a reality check here? It gets worse.’ He also called Glee [43] ‘a puddle of HIV.’ The howls of prissy hysteria from the white knights of cyberspace read like Bateman’s exposition on morality to Stash and Vanden. Though he’s hardly a Traditionalist, Ellis at least sees that the urgent moral imperatives of our time are so much tripe. Like Ellis’s characters in The Rules of Attraction, Americans frantically drug, drink, rut, and amuse themselves away from the nothingness of American life and the bankruptcy of its moral code.”